This week’s installment of Ten Questions features Honorée Fanonne Jeffers, whose first novel, The Love Songs of W. E. B. Du Bois, was published on August 24 by Harper. The steward of The Love Songs of W. E. B. Du Bois is Ailey Pearl Garfield, but the novel reaches back centuries before her lifetime. Ailey and her family spend summers in a Chicasetta, a small town in Georgia, where their roots extend back to and beyond the earliest days of the colonial slave trade. While Ailey narrates her coming of age as a Black woman in the eighties and nineties, her story is punctuated by “songs” that offer windows into this family history, which includes Black, Indigenous, and white ancestors. This is an astonishing book about the many forms of inheritance, painful and joyous. “From our earliest roots, African and Indigenous, to our present-day realities weighed down by inequity and injustice, Jeffers writes about all of us with such tenderness and deep knowing,” writes Deesha Philyaw. Honorée Fanonne Jeffers is a fiction writer, poet, and essayist. She is the author of five poetry collections, including The Age of Phillis (Wesleyan University Press, 2020), which won the NAACP Image Award for Outstanding Literary Work in Poetry and was longlisted for the National Book Award for Poetry and the PEN/Voelcker Award. She was a contributor to The Fire This Time: A New Generation Speaks About Race (Scribner 2016), edited by Jesmyn Ward, and her work has appeared in the Kenyon Review and the Iowa Review, among other publications. A member of the American Antiquarian Society, she teaches creative writing and literature at the University of Oklahoma. 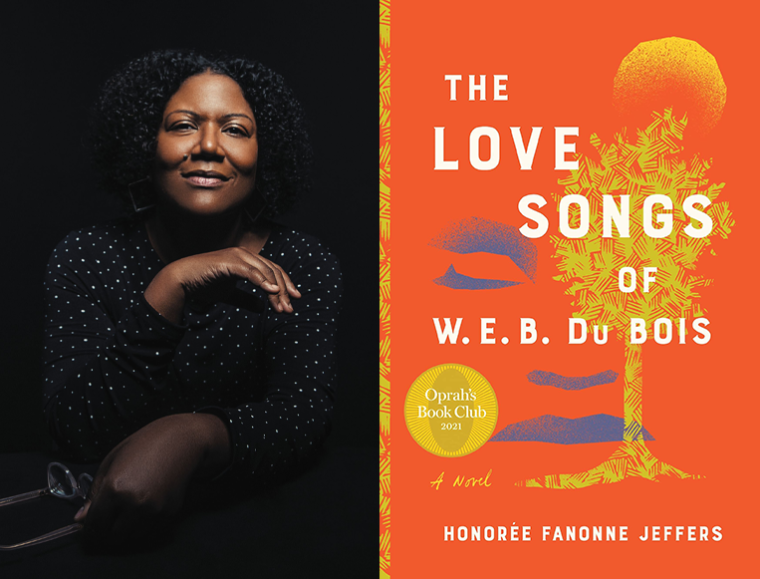 1. How long did it take you to write The Love Songs of W. E. B. Du Bois?
I’ve been trying to calculate that because I’ve been asked this several times. I’ve been writing short stories about characters who lived in Chicasetta—the setting of most of the novel—for twenty-five years. In the early time of writing about these characters I made a whole mock town history and genealogy, so I keep track of the characters. And then it just seemed like the novel sort of evolved from those stories. But the novel is a discrete thing. I was very intentional with writing it apart from the stories. The “vibe” is different, much more serious than my stories.

My agent sold the novel in 2018 and that was about nine years after I first started trying to write it. The overhaul edits and the line edits took two years after that. So total, eleven years.

But I always say “nine years” because the book that my agent sold is the draft after which nothing truly changed. I only started to polish that draft, if that makes sense.

2. What was the most challenging thing about writing the book?
The biggest challenge was keeping all the timelines straight! Love Songs covers two hundred and seventy-four years, and there is a huge cast of characters. So not only did I have to get the birth and death dates right for each character, there were also historical events that I had to remember.

3. Where, when, and how often do you write?
When I write fiction it’s usually in the very early mornings when everything is dark. Around four thirty or five I’ll rise and sit on my couch, and I’ll talk to God some. Then I make my tea and I’ll start writing. I like to greet the day that way. Those are the good days, when I have a quiet mind. These days, with all that’s going on, that might only happen two or three times a week, but when I’m in the thick of a project, it happens every day. I just get restless and very sad, trying to leave it alone.

I write longhand in a Moleskine notebook. I have so many of those around the house, and I’m always frantically searching for one that I wrote something in because I’m not good with organization.

My writing sessions are very intense and so after an hour—no more than two—I’m wiped. If I don’t have a really busy day, I’ll go back to bed and nap. Then when I wake again I’ll deal with the deadlines and e-mails and such.

With poetry I can’t say what my schedule is. Something will bubble, I’ll quickly write it down, and that’s it. I tend to binge-write poems in batches of two or three. Or sometimes I’ll have a dream and I’ll wake up, roll over, write something down, and then go back to sleep. Then I’ll return to that weeks or even months later.

I’m not good with writing in the middle of the day unless I’m nearly done with a small deadline and I’m just revising. My brain isn’t quite as original as I move through the day, so new things don’t come to me. I have so much on my mind. But in the mornings—or when I roll over from a dream—there’s only God and me talking to each other.

4. What are you reading right now?
Right now I’m reading Sonia Sanchez’s Collected Poems, which came out this past spring. Sanchez is such a touchstone for me, as a Black woman writer, and this volume follows her entire career. Her work is so important politically, but also she is a true craftsperson and knows prosody and poetics backwards and forwards. With Black poetry so many folks focus on racial topic and theme to the extent that they don’t see the brilliance of craft. But the way Sanchez crafts a poem is just mind-blowing.

And I’m rereading Toni Morrison’s Playing in the Dark: Whiteness and the Literary Imagination. I’m writing essays right now on Black women in my family and how they intersect with larger history, so I’m going back to Morrison and other Black women essayists of the late twentieth century. I always learn something when I commune with the “mothers” of African American literature.

5. Which author, in your opinion, deserves wider recognition?
I think there are a few writers who have been writing for a long time and haven’t “blown up” quite yet. Some folks are slow burners, and I enjoy evolved wisdom in writing.

Though some readers know about her, I think the African American fiction writer Gayl Jones is a genius. She kind of went quiet for a couple decades, came back, went quiet again, and now she’s publishing a new novel this year. I’m so excited! So Gayl Jones would be the writer that I would say needs to be known more, though many of us avid Black readers already know her work, of course.

These days all that contact keeps me from listening to my own thoughts. It seems like somebody is always “getting in the way of what I’m feeling,” to quote the singer Jill Scott. I’m having to steal away to my writing now. Sometimes I feel like I’m trying to have an affair, only with my art. That’s where the writing in the early dark morning helps. I feel a little bit sneaky and naughty.

7. What is one thing that your agent or editor told you during the process of publishing this book that stuck with you?
My novel editor at Harper, Erin Wicks, told me not to worry about how long or how short my book was. Just make it the best that I could—the best in my own estimation. And that’s what I did. Love Songs is quite long, but most readers say there’s no fat on the book, which surprised them.

8. What, if anything, will you miss most about working on the book?
I’ll miss the people of Love Songs. I don’t think of them as characters—I think of them as real folks, which is why some readers who don’t know me think all my characters are based on members of my family. They aren’t. But I wanted to make them seem like that, because over the nine years that it took for me to write this book, my characters were so beloved to me.

9. Who is your most trusted reader of your work and why?
There is one person that I trust the most with my prose, and that is my friend Andrew Jeon. He’s a fiction writer himself and has two books he’s working on that I’m really excited about. Andrew is about fifteen years younger than I am and so our friendship was pretty unexpected. But he’s known my writing for about ten years—he saw the first two “hot mess” drafts of Love Songs, and he looks at my short stories and now my essays, too.

Andrew is ruthlessly honest and very blunt—sometimes to the point where he really hurts my feelings—but that way, when he says something is working well and he starts giving compliments, I know he’s telling the truth. My other closest friends are women, and they tend to be very nurturing. But I don’t need to be nurtured when I am trying to figure something out. I need somebody to keep it real with me, and to figuratively punch me in the throat, because I still feel nervous about writing prose.

10. What’s the best piece of writing advice you’ve ever heard?
My mentor and friend, the great poet Lucille Clifton, used to tell me, “Always be open to the word.” Miss Lucille would say to not worry about the genre when you first write the word down. Just write it and let it speak. That has held me in good stead over these years.

“I find it really hard to follow a routine in almost every part of my life.” —Kat Chow, author of Seeing Ghosts

“Combining unsparing humor with heart is a superpower.” —Jaime Cortez, author of Gordo

“I write when an idea, story, or book commands me to.” —Louis Edwards, author of Ramadan Ramsey

“Show up no matter what so your writing knows you are there.” —Azareen Van der Vliet Oloomi, author of Savage Tongues