This week’s installment of Ten Questions features Claire Wahmanholm, author of the debut poetry collection Wilder, out today from Milkweed Editions. Selected by Rick Barot as the winner of the 2018 Lindquist & Vennum Prize for Poetry, given to a collection of poems by a Midwestern writer, Wilder is a lyric and formally daring collection that navigates a post-apocalyptic world both, as Maggie Smith writes, “bewildering and born of collapse”—a place where refugees listen to relaxation tapes on loop, people carry bombs inside their bodies, and plate tectonics have shifted to create a misery rift, tearing families apart across a sea. “I cannot recall a collection of poems that thrilled and devastated me more,” Smith says. Wahmanholm is the author of Night Vision, which won the 2017 DIAGRAM/New Michigan Press chapbook competition, and her second full-length collection, Redmouth, is forthcoming next year from Tinderbox Editions. Her poems have also appeared in PANK, Waxwing, the Bennington Review, Kenyon Review Online, and New Poetry of the Midwest, among others. She lives and teaches high school in the Twin Cities. 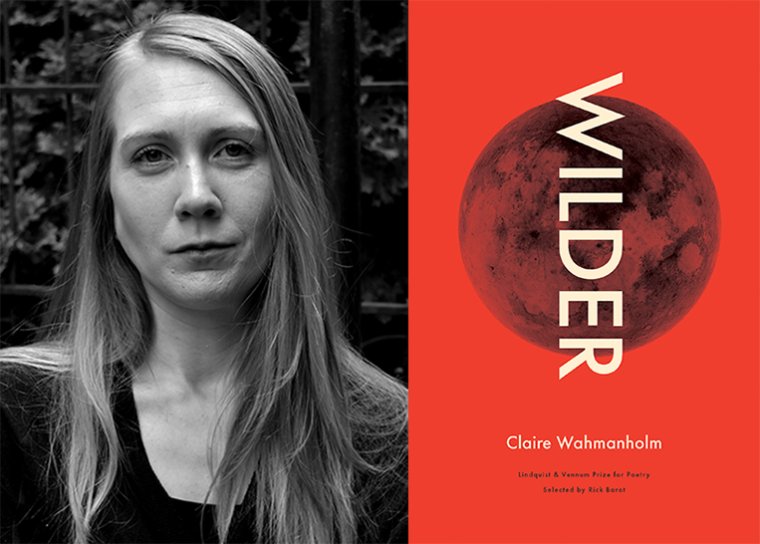 1. Where, when, and how often do you write?
Because I’ve got a two-year-old and I teach high school, I can pretty much only write in the summertime. There’s always that little flare of panic when I sit down after so many months of not writing—like, “Oh god I hope I still remember how to do this WHAT IF I’VE LOST MY TOUCH AND I’VE ALREADY WRITTEN MY LAST POEM.” But so far so good. I sit longways on my couch with the window behind me. Thankfully, the couch is pretty comfortable, because I’m sitting there from about 8 AM to 4 PM. Whenever I feel like I should stand up or drink water or blink, I remind myself that time is precious and we may all be dead before next summer comes around. That’s usually a pretty good motivator. I get a lot done in the summer.

2. How long did it take you to write Wilder?
The earliest poems in the book—some of the “Relaxation Tape” poems—are from the summer of 2015. The last poem I wrote, “W,” was written this past July, literally minutes before I submitted the final edits to the Milkweed folks.

3. What was the most surprising thing about the publication process?
I was surprised by how late some pretty major edits happened. I’d been driving myself crazy over the order of the book for a long time—I must have run through ten completely different versions and nothing felt right. Every now and again I’d sidle up to my husband and say, “Okay, this time I think I’ve actually got it, can you read this sixty-page document for the ninth time this week?” and once he may actually have cried. Eventually I’d settled on an order that felt good and then, almost literally the day the final edits were due, I added some poems, rearranged everything again in an order I somehow hadn’t previously considered, and finally felt that little gasp that tells you you finally nailed it. I don’t know if it was the time pressure or if it was adding those final poems or what, but to have finally gotten it right at the eleventh hour was shocking to me. At least I think it’s right. Don’t tell me if it isn’t.

4. What is one thing you’d change about the literary community and/or the publishing business?
l feel like this business really rewards folks who are good on their feet. I have an endless well of jealousy and admiration for writers who can say really smart, polished, charming things in Q&As and other spontaneous venues. I can often trick people into believing I’m witty and spontaneous at my readings, but it’s only because I literally write out all my banter ahead of time. I’m just very good at the delivery. But the charade is exhausting.

5. What are you reading right now?
Basically what I’m currently teaching: Sweat by Lynn Nottage and Maxine Hong Kingston’s The Woman Warrior. I tried to start Kiese Laymon’s Heavy but it’s so immersive that I ended up forgetting to stand up/drink water/blink so I decided to set it aside until Thanksgiving break. It’s a dangerous book.

6. Who is the most underrated author, in your opinion?
Gjertrud Schnackenberg’s Heavenly Questions is a master class in grief. If you want to ugly cry in public/in front of your students/at home in the dark, this book is for you. Her use of meter is devastating. I tried to imitate it for a while before people were like, Hi, nope, you are not pulling this off. Which, okay, fair. I don’t know if she’s underrated, exactly, but I do think she flies under many folks’ radar.

7. What trait do you most value in an editor?
Someone who can call you out on your patterns. Our own “moves” can be impossible to see, even if we’re looking at an entire manuscript full of them. Joy Katz did the copy edits for Wilder and pointed out that I was ending an embarrassing number of poems with the exact same move. As soon as she pointed it out it was groaningly obvious, of course, but I never would have seen it myself. I think it’s also imperative to have someone with a different aesthetic read your work. We often give passes to work that reminds us of our own, so someone who can cut through that is going to be super helpful, even if it might not feel as good initially.

8. What is the biggest impediment to your writing life?
Right now it feels like I don’t have enough time to do all the writing I want to do, though in reality I probably don’t have much less time in a year than other folks who work full-time—mine is just distributed in an unusual way. It feels like I’m “falling behind” from September to May because I’m not producing any new work then, but I “make up for it” (as if it’s a competition, somehow?) from June to August. At least I tell myself it all evens out.

9. What’s one thing you hope to accomplish that you haven’t yet?
I’d like to write a successful lyric essay. I feel like my poems have gotten more essay-ish lately, but I can’t quite make the leap into full-blown essay. There are several things I’ve been trying to write about for years that, I think, would rather be essays than poems, but I haven’t been able to make it happen yet. Also someday I’ll put all my books on bookshelves and organize them in a meaningful way—lol no I won’t the stacks will crush me in my sleep.

10. What’s the best piece of writing advice you’ve ever heard?
This wasn’t intended as writing advice necessarily, but it does guide my writing. When I was nervous about not knowing how to act around my soon-to-be-born child, I read something along the lines of, “Just be yourself, because your kid can sense if you’re being inauthentic”—like, children’s bullshit detectors are extremely well-honed, even though they entered the world ten minutes ago. I think the same is true for poems—if you’re being inauthentic, the poem can tell and it will be garbage. This isn’t to say you shouldn’t take risks or surprise yourself—just do it honestly. The best poems I’ve written (or at least my favorite poems) have been the ones that have been the most honest.

“Writing is a form of manual labor and should be approached in that spirit.” —Wesley Yang, author of The Souls of Yellow Folk

“I have three states of being: feeling doubt, manifesting a vague desire to say something that seems important, and writing toward ground zero of that desire.” —Christopher Kennedy, author of Clues From the Animal Kingdom