This week’s installment of Ten Questions features Christopher Kennedy, whose fifth poetry collection, Clues From the Animal Kingdom, is out today from BOA Editions. In the collection, Kennedy sifts through the detritus of the past to uncover the memories, images, and symbols that shape an individual’s consciousness. “There is joy and dread here, in every carefully considered line,” writes Dave Eggers about the book. Looking to the natural world for inspiration, Kennedy offers prose poems that offer, as George Saunders puts it, “a moving portrait of the human heart examining itself.” Christopher Kennedy is the author of four previous poetry collections, including Ennui Prophet (BOA Editions, 2011), and Encouragement for a Man Falling to His Death (BOA Editions, 2007), which received the Isabella Gardner Poetry Award. He has received fellowships from the National Endowment for the Arts and the New York Foundation for the Arts, and a grant from the Constance Saltonstall Foundation for the Arts. He is a professor of English at Syracuse University where he directs the MFA program in creative writing. 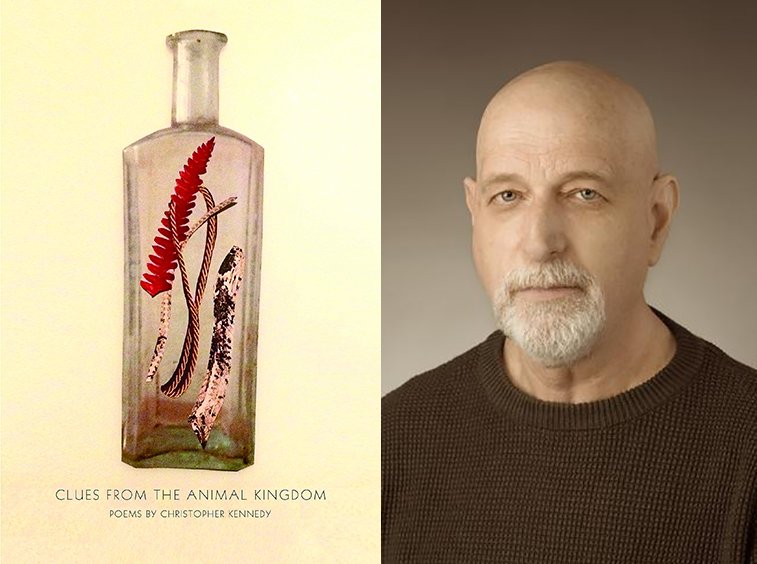 Christopher Kennedy, author of Clues From the Animal Kingdom.

1. Where, when, and how often do you write?
I write anywhere I happen to be at any time of day, though I tend to write first drafts at night and revise during the day. I take breaks, sometimes for months, usually because I’m teaching and want to devote my energy to my students’ work, but when I’m writing, I write every day.

2. How long did it take you to write the poems in Clues From the Animal Kingdom?
There are some lines in the poems that are decades old, but I’d say most of the poems were written between 2007 and 2016. I tend to save old poems and scavenge from them when I’m stuck working on something newer. I trust that it’s all coming from the same source and can be reshaped to resolve whatever dilemma I’m facing.

3. What was the most surprising thing about the publication process?
I was surprised at the relationship between the poems in the collection. It feels as if it’s part poetry, part fiction, part memoir, in the sense that if you read it cover to cover there is a narrative arc, at least in the sense of moving from one emotional/psychological state to another, as well as temporal shifts that feel organic to a plot I never would have imagined would exist.

4. What is one thing you’d change about the literary community and/or the publishing business?
I have a fantasy that book publishers could find a way to form consortiums that would allow them to open their own bookstores. I miss being able to browse shelves and strike up conversations with knowledgable staff in a place devoted to books.

5. What are you reading right now?
Mostly I’m reading my students’ work, which impresses me on a daily basis, but I was on leave last semester, so I was able to read a lot over the spring and summer. Here’s a short list of books I read and recommend. Poetry: former students Grady Chambers and Jessica Poli’s book and chapbook, respectively, North American Stadiums and Canyons. Short story collections: Samantha Hunt’s The Dark Dark, Rebecca Schiff’s The Bed Moved, and Denis Johnson’s The Largesse of the Sea Maiden. Novels: Paula Saunders’s debut, The Distance Home, and Jonathan Dee’s The Locals. I also read some unpublished stories from a collection in process by Sarah Harwell, a wonderful poet and fiction writer. They’re linked stories set in an airport, and they’re fantastic.

6. If you were stuck on a desert island, which book would you want with you?
If I had a good dictionary, I’d have everything I need and lots of time to recreate everything I’ve ever read. That seems impractical, though, so I’d bring Denis Johnson’s The Incognito Lounge. It had a profound influence on me thirty-plus years ago, and every time I read it again, it holds up.

7. Who is the most underrated author, in your opinion?
I could name several, but Gary Lutz comes to mind immediately. One Gary Lutz sentence is worth a thousand pictures.

8. What is the biggest impediment to your writing life?
I don’t have any impediments other than my own psychology. For me, writing is a constant struggle between thinking I have nothing of any importance to say and believing that when I do have something to say I won’t be able to express it properly. I have three states of being: feeling doubt, manifesting a vague desire to say something that seems important, and writing toward ground zero of that desire.

9. What’s one thing you hope to accomplish that you haven’t yet?
I’d like to dunk a basketball, but I’d settle for writing more poems that are focused on the current socio-political scene. Some of my work has that emphasis, but I’d like to expand that part of my work.

10. What’s the best piece of writing advice you’ve ever heard?
Hayden Carruth wrote this in a letter to me several years ago: “The language of a poem is like a balloon, it must be stressed enough to make its shape full and taut, but not enough to make it explode.”

“That was the scariest part in making this come together: the endless possible permutations of inclusion, exclusion, order; the fear of endless possibility.” —Grady Chambers, author of the poetry collection North American Stadiums