This week’s installment of Ten Questions features Emily Jungmin Yoon, whose debut poetry collection, A Cruelty Special to Our Species, is out today from Ecco. In the collection, Yoon explores gender, race, and the history of sexual violence against women, focusing in particular on so-called comfort women—Koren women who worked in Japanese-occupied territories during World War II. Yoon was born in Busan in the Republic of Korea and received her BA at the University of Pennsylvania and an MFA in creative writing from New York University. She won the 2017 Tupelo Press Sunken Garden Chapbook Prize for her chapbook Ordinary Misfortunes, and has been the recipient of awards and fellowships from Ploughshares, the Association of Writers and Writing Programs, and the Poetry Foundation, among others. Yoon’s poems and translations have appeared in the New Yorker, POETRY, and the New York Times Magazine, and she serves as poetry editor for the Margins, the literary magazine of the Asian American Writers Workshop. She is currently pursuing a PhD in Korean literature at the University of Chicago. 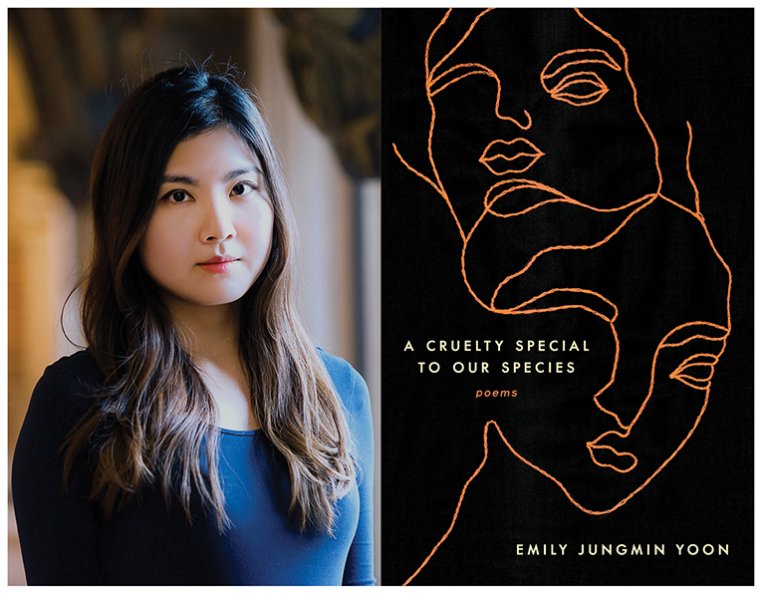 Emily Jungmin Yoon, author of A Cruelty Special to Our Species.

1. Where, when, and how often do you write?
I write at home, usually late night. I find that poems in my head become louder when everything is quiet. I write rather sporadically now, so there isn’t a fixed schedule, but when I was writing the poems in A Cruelty Special to Our Species, I would write maybe three to five days a week.

2. How long did it take you to write A Cruelty Special to Our Species?
To completion, about four years, but a good chunk of the poems came in early 2015, in the last semester of my MFA program at NYU—that was a very fruitful period.

3. What has been the most surprising thing about the publication process?
That time goes by so quickly! It took a little more than a year for the book to be published after the signing of the contract, and I felt like I just couldn't wait. But after rounds of proofreading and editing, a year had already passed.

4. Where did you first get published?
My first magazine publication was the Claremont Review, a Canadian magazine that publishes works by writers and artists in the age range of 13 to 19 from around the world. It was very exciting and encouraging to see my poems in print among others.’ I’m grateful for the space that CR provides young creators.

5. What are you reading right now?
I am reading the complete works of Kim Su-young’s poetry, from 1945 to 1968. His poetry influenced a lot of other poets, and I’m interested in his relationship to language, as he was writing post-liberation and when linguistic nationalism was rampant.

6. If you were stuck on a desert island, which book would you want with you?
Maybe an instructive book on how to survive in the wild.... But for joy, Li-Young Lee’s Rose. There are so many amazing books, but Rose was my first love in poetry.

7. Who is the most underrated author, in your opinion?
She’s more unrecognized than underrated, perhaps, but: Ronyoung Kim. She was the author of Clay Walls, which is the first novel written in the U.S. about Korean immigrant experience. Published in 1986, Clay Walls was the first Korean American novel. Not many people now seem to know about her or the book, though it was nominated for the Pulitzer.

8. What is the biggest impediment to your writing life?
Stress from non-writing work, for sure. I have to deliberately and strategically clear out space and time to not think about any of that and focus on reading and writing poetry.

9. What trait do you most value in your editor?
I appreciate Gabriella Doob and Dan Halpern for their warmth, support, and trust. They believe in my vision and are just wonderful people.

10. What’s the best piece of writing advice you’ve ever heard?
Jericho Brown said to our class at Aspen Words, “Be your ultra-self.” I tend to be pretty self-conscious when writing; I think it’s good to be concerned and careful about specific words and their implications, but sometimes it disrupts the flow. So I try to imagine what a bolder, wilder, and more carefree me would say. Any part that doesn’t sit right can be edited later.