This week’s installment of Ten Questions features Cherie Dimaline, whose latest novel, Empire of Wild, is out today from William Morrow. In a tight-knit Métis community in Canada, a young woman named Joan has been searching for her missing husband, Victor, for eleven months to no avail. One morning, however, a mysterious revival tent appears in the nearby Wal Mart parking lot, and when Joan wanders inside she discovers a man who appears to be an exact copy of Victor, only he insists that he is a reverend named Eugene Wolff and that he has never met her before. Joan doesn’t even get the chance to let her discovery sink in before another tragedy strikes, when a beloved family member is attacked by some kind of animal. Working with her young cousin and a Métis elder, Joan resolves to recover and protect both her husband and her community. Inspired by the Métis story of the Rogarou—a werewolf-like creature that is said to haunt native communities—Empire of Wild is a literary thriller about family, tradition, and the ongoing colonial violence against First Nations people. “Empire of Wild is doing everything I love in a contemporary novel and more,” writes Tommy Orange. “It is tough, funny, beautiful, honest, and propulsive.” Cherie Dimaline is also the author of the young adult novel The Marrow Thieves (Dancing Cat Books, 2017), which won the Governor General’s Literary Award for Young People’s Literature and the Kirkus Prize for Young Readers’ Literature. A member of the Georgian Bay Métis Community in Ontario, she was the first Indigenous author to serve as writer in residence at the Toronto Public Library. She lives in Vancouver. 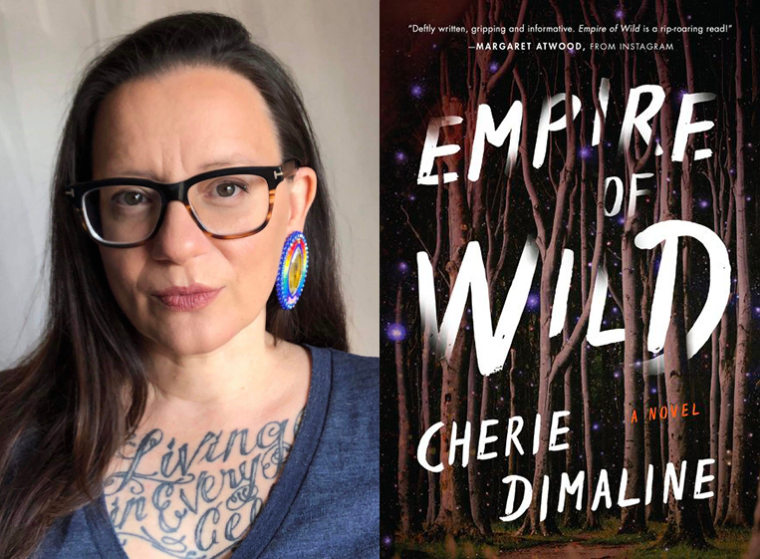 1. How long did it take you to write Empire of Wild?
Empire of Wild, start to finish, took about a year. I like to try to write as quick as I can since I get completely consumed. Like, days in pajamas, forgetting to eat, locked in my office with papers taped to the walls kind of consumed. Basically, I am a health risk while I write so it’s best to get it done in gulps.

2. What was the most challenging thing about writing the book?
The story of the Rogarou is one I heard growing up, told by the old women in my community. I enjoyed turning him into a sexy, charismatic dandy, but it was a challenge to make sure that I was still following the rules laid down for his original story—the ways in which he is brought forth, the ways in which he can be tamed….

3. Where, when, and how often do you write?
This is a cliché, I know, but, everywhere and always. Empire of Wild began as notes on the back of a barf bag while I was taking the red-eye flight from Vancouver to Toronto. It’s hard to shut it off. A few years ago, I wrote an entire book while working in a cubicle at a government job. Sorry, employers. We do that.

4. What are you reading right now?
I am rereading Young God by Katherine Faw Morris and The Blue Clerk by Dionne Brand. I am also doing a shit ton of research on the Salem Witch Trials, souvenir culture, and roadside attractions for an upcoming project—so lots of very strange books and articles.

5. Which author, in your opinion, deserves wider recognition?
Oh my god, so many, especially since Canadian writers often get left out of the wider literary scene. Eden Robinson, who writes Indigenous horror; Kevin Hardcastle, who writes northern hillbilly noir; and Canisia Lubrin, whose work is Black brilliance crystallized in poetry, are all Canadians that deserve the spotlight. In the U.S., Omar El Akkad is a damn genius and American War should already be a movie. Why isn’t it a movie?! Why is no one standing over his chair making sure he is finishing another masterpiece?!

6. What is one thing you might change about the writing community or publishing industry?
We need more diversity at the decision table and not just in the writing trenches. We need editors, publicists, agents, and executives of color, with different backgrounds and identities, who can champion our work, utilize lived experience to understand what goes into marketing them, and give the work the best chance to thrive. Our writing doesn’t need a “leg up” to compete in the mainstream. It needs a mainstream that operates in part from our perspective and community. No extra legs needed. Just more brilliant minds.

7. What trait do you most value in your editor (or agent)?
TRUTH! I need to know if I’ve written a project for the recycling bin before I get my hopes up. I need to see all the red lines at once so I can go home and cry about it for twenty-four hours before diving in and getting it done, or redone, in this case.

8. If you could go back in time and talk to the earlier you, before you started Empire of Wild, what would you say?
I wrote Empire of Wild during a time when my young adult book The Marrow Thieves was enjoying a huge run on bestseller lists in Canada. It was completely intimidating to have so many people waiting for the next book and I was all wrapped up in the reality that Empire was completely different from Thieves and worried about how that would play out. I would remind myself that every book has its own life and to just have faith in the story. Sure, a lot of young adult fans were disappointed it wasn’t another Thieves, but I found a whole new audience who loved Empire just as much.

9. Who is your most trusted reader of your work and why?
My agents. My husband is not valid as he is contractually obligated to think I’m amazing. My agents—Rachel Letofsky, Ron Eckel, and Dean Cooke of CookeMcDermid Agency—will tell me the truth. They also entertain my meltdowns without telling me how ridiculous I am being. Oh, and they understand the importance of champagne at business meetings.

10. What’s the best piece of writing advice you’ve ever heard?
Indigenous Canadian writer and Elder Lee Maracle once told me, “Don’t throw anything away. There’s a reason you wrote it in the first place, even if it doesn’t belong in the piece you’re drafting.” I keep a folder on my laptop with snippets that have to be cut. After editing one of my novels, I ended up using the pieces in the folder to finish a volume of short stories.

This week’s installment of Ten Questions features Ryad Girod and Chris Clarke, the author and the translator of the novel Mansour’s Eyes.