This week’s installment of Ten Questions features Adrian Tomine, whose graphic memoir The Loneliness of the Long-Distance Cartoonist is out today from Drawn and Quarterly. Adopting a new minimalist, black-and-white style, Tomine depicts poignant and comedic scenes from his life and career. The story begins with Tomine traveling to Comic Con in 1995, recalling the childhood bullies he left behind: “Well, I showed them!” he thinks to himself. “I said I was going to be a famous cartoonist when I grew up, and now… Here I am!” But despite his success, Tomine reveals there are more bumps in the road than an outsider might realize—results of the cruelty of others as well as personal mistakes. In illustrating these moments of vulnerability, especially in the comics world, he depicts a more complete vision of reality than is ordinarily revealed. “A wonderful book about feeling morbidly self-conscious while also longing to connect with other people,” writes Roz Chast. Adrian Tomine is the author of the ongoing comic book series Optic Nerve and several books, including Killing and Dying and Shortcomings, which was named a notable book of the year by the New York Times. His illustrations appear regularly in the pages and on the cover of the New Yorker. Tomine lives in Brooklyn. 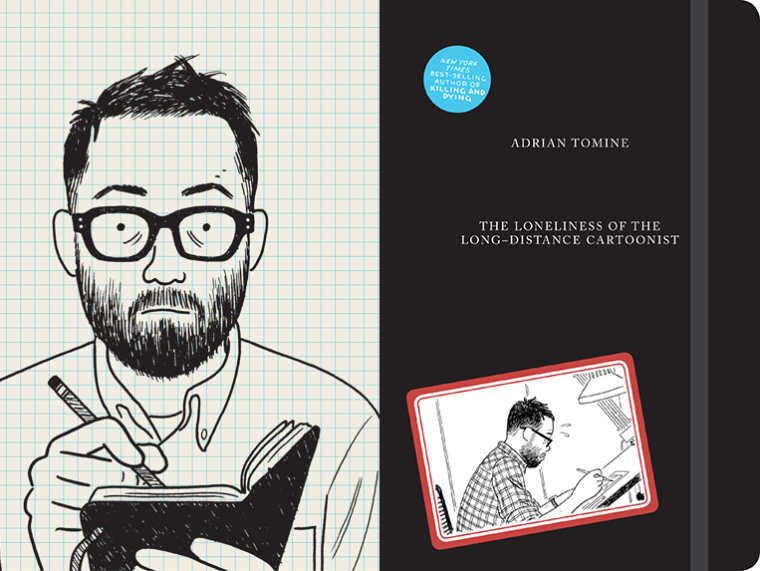 Adrian Tomine, author of The Loneliness of the Long-Distance Cartoonist.

1. How long did it take you to write and draw The Loneliness of the Long-Distance Cartoonist?
About two years, but with a fair number of interruptions from other projects and life.

2. What was the most challenging thing about creating the book?
Getting it printed, with all the bells and whistles I wanted, just as the world was going into lockdown.

3. Where, when, and how often do you write and draw?
At a drafting table in the corner of my wife’s and my bedroom, whenever our kids aren’t demanding something else of me.

4. What are you reading right now?
The Sky Is Blue With a Single Cloud by Kuniko Tsurita, Death in Her Hands by Ottessa Moshfegh, various “George and Martha” books by James Marshall.

5. Which author, in your opinion, deserves wider recognition?
Yuko Tsushima.

7. What is one thing you might change about the writing community or publishing industry?
This is actually too big of a topic for this quick questionnaire, but in the simplest terms, we need the industry to be more reflective of the audience.

8. If you could go back in time and talk to the earlier you, before you started The Loneliness of the Long-Distance Cartoonist, what would you say?
Don’t insist on making this book look like a real Moleskine notebook.

9. Who is your most trusted reader of your work and why?
My wife, Sarah. She’s an extremely sharp and sensitive reader, both unsparing in her criticism and generous in her praise. If something is unclear or confusing to her, I know there’s a problem. She’s had a huge influence on me in terms of trying to find humor in even the darkest stories, as well as finding some sort of empathy for even the least appealing characters. She actually was a book editor when I met her, and I’m sure she could’ve excelled in that career had she chosen to do so.

10. What’s the best piece of creative advice you’ve ever heard?
My friend Richard Sala had two catchphrases/mantras: “I can’t win” and “It never ends.” Taken together, they seem like the perfect summation of creative struggle.