This week’s installment of Ten Questions features Alison C. Rollins, whose debut poetry collection, Library of Small Catastrophes, is out today from Copper Canyon Press. Drawing on Jorge Luis Borges’s fascination with the library, Rollins uses the concept of the archive to uncover and investigate ideas of loss, progress, and decay. As Terrance Hayes writes of the book, “The small and large darknesses catalogued here make this a book of remarkable depth.” Rollins was born and raised in St. Louis and currently works as a librarian for the School of the Art Institute of Chicago. Her poems have appeared or are forthcoming in American Poetry Review, Hayden’s Ferry Review, Missouri Review, Poetry, and elsewhere. A Cave Canem and Callaloo Fellow, she was a 2016 recipient of the Poetry Foundation’s Ruth Lilly and Dorothy Sargent Rosenberg Fellowship. 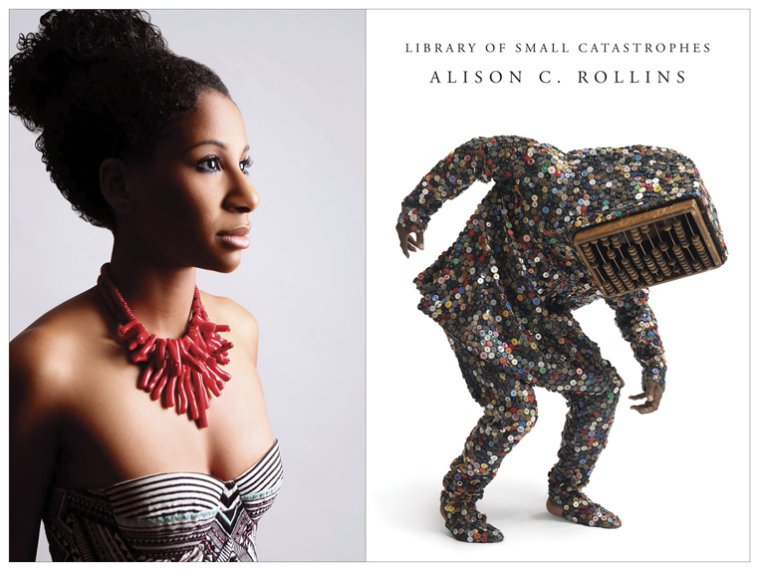 1. How long did it take you to write Library of Small Catastrophes?
The poems in Library of Small Catastrophes were written over a three-to-four-year span. However, I would venture to assert that the book has taken a lifetime to write in terms of the necessity to live, experience, read, and hone my craft over time. Robert Hayden in the poem “The Tattooed Man” has the phrase: “all art is pain suffered and outlived.” While I don’t hope to glorify suffering in the service of artistic practice I do think it is important to celebrate living, awareness, observation, and the act of being present in the world. Many of the poems in this book are based on experiences that I have witnessed or been a part of and I had to live them and be present within them to in turn translate them into poems. I want to equally highlight time and labor because this sort of question can in some ways place greater value on Library of Small Catastrophes as a product rather than on the living required to make the physical object of a book. I don’t seek to glorify suffering but living requires exposure to both joy and pain (in often highly unbalanced ways for certain bodies in the context of the United States). I wish to celebrate living and to do so not always in relationship to measured productivity or a finished product such as a book.

2. What was the most challenging thing about writing the book?
It was challenging to accept that with the birth of the book all the other seemingly limitless possibilities for the project in turn died. There is a certain finitude to publishing a book that makes me a little uncomfortable in the sense that the work becomes a fairly static thing. I can’t continue to edit, reorder, change the cover art, etc. To go back to question one, I try to privilege the concept of being in process over something that is finalized. In Parable of the Sower Octavia Butler writes, “The only lasting truth is change.” If Butler is right, which I think she is, we all need to work towards increasing our tolerance to change.

3. Where, when, and how often do you write?
A large majority of the poems in Library of Small Catastrophes were written during the day at work in libraries. I don’t have a daily writing practice or formal schedule. I read on the bus ride to work and I write in stolen moments while at work. Much of my writing is in direct contact with other forms of labor that I am directly engaged in. Writing retreats have been especially helpful to me to carve out writing-intensive periods where I can focus.

4. What was the most unexpected thing about the publication process?
Having to contextualize the book from a marketing and press standpoint was something that was not initially on my radar. I hadn’t really thought of the skill necessary to step back and frame the work within the context of a blurb or a synopsis. It is a really interesting and rather separate endeavor from writing the actual individual poems that came to make up the collection. To articulately explain what you see the overall project as functioning to do can be oddly challenging and unexpected at the end of the publication process.

5. What are you reading right now?
I just finished Marian Engel’s Bear, Alexander Chee’s How to Write an Autobiographical Novel, and Kiese Laymon’s Heavy. I’m currently reading Renee Gladman’s Juice, Audre Lorde’s Zami: A New Spelling of My Name, and Ilya Kaminsky’s Deaf Republic. I am a librarian and voracious reader so this literally changes every other day.

6. Which author, in your opinion, deserves wider recognition?
This question depends a lot on context, realities about how literary canons function, systemic inequity, as well as how “wider recognition” is being defined and measured. This is a very difficult question to answer but I will offer in response the names of three poets: CM Burroughs, M. NourbeSe Philip, and Dawn Lundy Martin. I will also say Phillis Wheatley for good measure.

7. What is one thing you’d change about the literary community and/or the publishing business?
I am probably a lofty romantic but I wish people in the “literary community” extended more grace to one another and more often than not embraced curiosity and awe as lifestyles. I wish that people read more widely and embodied a belief that there is space at the table for everyone—and in turn found this notion to be freeing rather than threatening. While I realize sales-driven approaches and the economics of the publishing industry are arguably necessary evils, I wish that as an industry we didn’t underestimate readers and their capacity or desire for strong innovative writing. I would argue that all people are hungry for access to beautiful words, fresh ideas, and moving storytelling. Lastly, I am surely imperfect but I genuinely strive on a fundamental level to be a kind person. I don’t think extending grace to myself and others should result in my being viewed as any less talented, intellectual, and critically rigorous. We could all use more kindness.

8. What is the biggest impediment to your writing life?
Time. In How to Write an Autobiographical Novel Alexander Chee writes, “Time is our mink, our Lexus, our mansion. In a room full of writers of various kinds, time is probably the only thing that can provoke widespread envy, more than acclaim. Acclaim, which of course means access to money, which then becomes time.” I could not agree more.

9. What trait do you most value in an editor?
I value most an editor with an expansive imagination. More specifically, I appreciate an editor that does not succumb to a limited imagination in terms of my identity/subject/position in the world and what that means in relationship to my writing and the potential readers of my work.

10. What’s the best piece of writing advice you’ve ever heard?
Terrance Hayes relayed the Thelonious Monk quote, “A genius is the one most like himself” during a craft talk at a writing retreat that I attended a few years ago. It truly resonated with me because without sounding cliché I think writing should be connected to the constant ever-evolving work of discovering, (re)imagining, and (re)claiming one’s own selfhood.