Every summer for the past thirty years, dozens of writers, educators, editors, publishers, and literary agents have convened at the University of the South in Sewanee, Tennessee, for the annual Sewanee Writers’ Conference. The twelve-day conference offers writing workshops and craft lectures in poetry, fiction, and playwriting, as well as instruction and guidance in the editing and publishing process. This July the conference celebrates its thirtieth year, welcoming both newcomers and returning faculty and participants who view the annual journey to Sewanee as a homecoming. 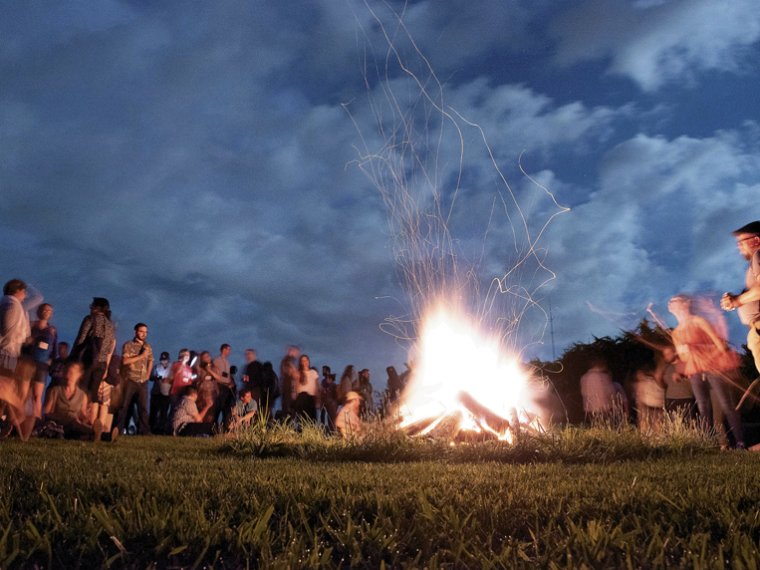 Writers gather for a bonfire at the 2018 Sewanee Writers’ Conference in Tennessee.

Founding director Wyatt Prunty, a poet whose most recent collection is Couldn’t Prove, Had to Promise ( Johns Hopkins University Press, 2015), organized the first Sewanee Writers’ Conference in 1989. “I was teaching poetry workshops at Johns Hopkins, and I was used to seeing a lot of writers in Baltimore,” says Prunty, who went on to teach at the University of the South (known colloquially as Sewanee). “Sewanee is a small college; we didn’t have so many people passing through, and the idea of a writers conference was something that would be good for the school and it was something that was dear to my heart because I wanted to have writers around. It’s a very happy thing when people come in with their work and have it read in the company of writers.”

The conference was originally limited to fifty participants, but thanks to the Walter E. Dakin Memorial Fund and support by the estate of Tennessee Williams, the conference has grown to accommodate one hundred fifty writers each year. Two-thirds of the cost is covered for each participant, and dozens of additional fellowships and scholarships covering the full cost of tuition are available for published writers. “We built up an endownment over these thirty years that will only double over the next twenty years or so,” Prunty says. Today the conference offers a full slate of activities: In addition to workshops, each of which is led by two faculty members, participating writers have the opportunity to attend daily readings, sit in on craft lectures, and meet with faculty members and publishing professionals to discuss their work.

Past attendees, several of whom have returned to Sewanee as faculty or guests—including Claire Messud and Tony Earley—speak of the inspirational energy and sense of community at the conference. “Sewanee’s been a lovely part of my summers and my family’s for many years,” says Alice McDermott, an early participant who will be a guest reader at this summer’s gathering. “It was clear to me from the start that the quality of the work of all the participants was going to be very high. This has never changed. In fact the reliably high caliber of work, the brilliance of the craft lectures—my favorite conference activity—and the general good cheer have remained consistent throughout these many years. It’s a part of what makes so many of us on faculty, and not a few returning participants, feel grateful for the sense of déjà vu in Shangri-la we all feel at the beginning of every conference.”

The Sewanee organizers have worked to make sure that this year’s conference is no exception. To be held from July 16 to July 28, the program will feature classes and conversations with former U.S. poet laureate Robert Hass, poet and translator Marilyn Nelson, and Tim O’Brien, one of the conference’s original faculty members and author of The Things They Carried (Houghton Mifflin, 1990), among others. Participating publishing professionals include agents Jin Auh, Anna Stein, and Renée Zuckerbrot, and editors Emily Nemens of the Paris Review, David Lynn of the Kenyon Review, and Barbara Epler of New Directions. Applications are open until March 20.

For McDermott, Sewanee’s ongoing value lies not just in the standout faculty, but in the readiness and intimacy of the literary conversations and the growing diversity of the conference. “The model of the workshop with two leaders, as well as the one-on-one time in manuscript conferences, is really only a continuation of the emphasis on conversation at Sewanee,” she says. “Perhaps the best indication of the conference’s Southern roots is how deeply and leisurely, warmly and wittily, people at the Sewanee Writers’ Conference talk to one another. Like the rest of the culture, [the conference] has benefited from striving to include more diverse voices and points of view, but it remains a gathering of like-minded people who care about story and language and literature and conversation.”

Thea Prieto writes and edits for Portland Review, Propeller, the Gravity of the Thing, and Oregon Music News. Her website is theaprieto.com.

The country’s longest-running literary quarterly publishes its 500th issue with a new design, a new editor, and a new submissions platform, but the same old commitment to literary excellence.

The author of An American Marriage on the retreat in Sheridan, Wyoming.

If You Build It: Do-It-Yourself Writers Retreats
by Melissa Faliveno | Special Section 3.1.17

Ten writers prove that, with a little imagination, you can create your very own writing retreat to fit your life and schedule—either at home or away.