One of the leading lights in the literary community and among the funniest voices on Twitter, Maris Kreizman is the host of Literary Hub’s weekly podcast the Maris Review. But many readers were introduced to her when she created Slaughterhouse 90210, a blog that pairs some of the greatest lines in literature with images from pop culture. It later became a book, published by Flatiron Books in 2015. 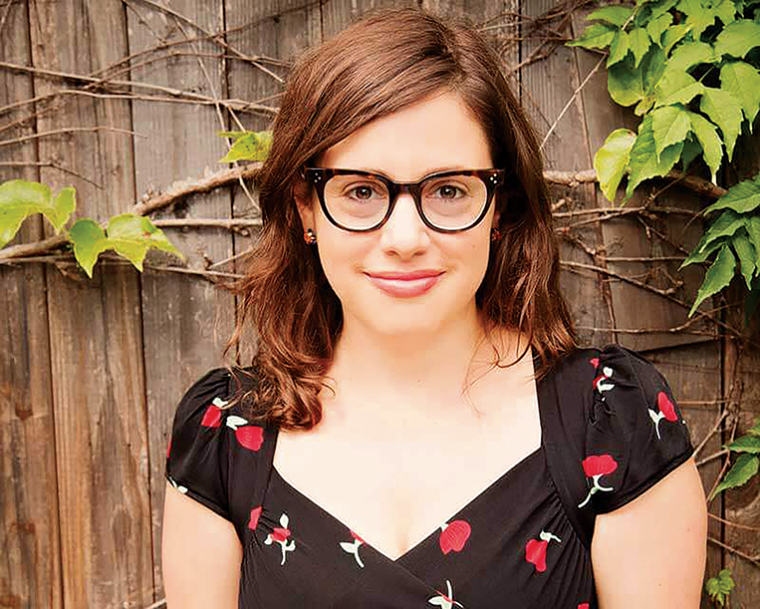 Her reviews, essays, and profiles have appeared in the New York Times, the Wall Street Journal, the Los Angeles Times, the Atlantic, Vanity Fair, GQ, Glamour, the New Republic, Publishers Weekly, and elsewhere. She has hosted readings and moderated literary panels with authors such as Elif Batuman, Patricia Lockwood, Weike Wang, and Leni Zumas at various bookstores, conferences, and festivals across the country.

Kreizman got her start in the world of publishing at Free Press, an imprint of Simon & Schuster, in 2001, and later moved to Counterpoint Press, where she was an editor until 2007. Since then she has held positions at BarnesandNoble.com, where she was the editorial director of digital content; Kickstarter, for which she was a publishing outreach lead; and Book of the Month, where she was editorial director. She began working as a full-time freelance writer in 2017. She lives with her husband in Brooklyn, New York.

How have your experiences at Barnes & Noble, Book of the Month, and Kickstarter informed the freelance work you do today?
I learned a lot about the scope of the publishing industry at my various jobs. I worked with lots of self-published authors at BarnesandNoble.com, I worked with small presses and literary magazines at Kickstarter, and I messed around with what sorts of titles could be included in the genre of “book-club books” at Book of the Month. My favorite thing about freelancing is being able to focus my time and energy on the books of my choice, reading for me as the primary audience rather than a group of consumers.

You created the hilarious Slaughterhouse 90210. What was the impetus for this?
It was 2009, I was bored at work, and my coworker suggested I start a Tumblr showcasing book quotes. It occurred to me that if I paired literary quotes with images from TV shows, I’d get a lot more mileage out of it. So it started as an exercise in juxtaposition as a silly distraction, and it eventually grew popular enough to get me a book deal out of it. I don’t stand by every post I ever did, but I do still find value in the idea that books speak to other art forms and that they inform my worldview right alongside film and TV and other cultural touchstones.

How many books do you typically receive from publishers per week? And what percentage of those are you able to cover, whether in reviews, roundups, or interviews?
I get about seven or eight books per day, or about thirty-five to forty books per week, mailed to my home. My husband has been very understanding about the mess. I’d guess I engage with about 10 percent of them. I spend a lot of time on the Maris Review, my weekly book podcast, but even that has only fifty-two slots.

Is there anything from the publishing side that raises your interest in a particular book or author—a sizable advance, notable blurbs, your relationship with an editor or publicist?
As far as I’m concerned, blurbs mean next to nothing. Advance size is interesting in gauging publisher expectations for a book, but it’s rarely an indicator of quality. Same with extravagant mailers—the advance reader’s copies that come in custom-colored envelopes with glitter or tchotchkes or whatever inside them. That said, I really do value relationships with agents and editors and publicists who have a good sense of my taste and will call out books they think will speak to me.

What is your reading process like?
It varies. If at all possible, I aim to have thinking days. I love to have a few days after I finish a book to chew on it before I have to write about it. And then sometimes I’m doing a roundup and I’m reading five books at once and vomiting out opinions on all of them as quickly as possible. Writing a book listicle is a zillion times more difficult than engaging with one book for a decent amount of time. They’re much maligned, but listicle writers—the ones who read the books, anyway—are heroes.

Have you ever changed your mind about a book that you praised or panned years earlier? Has a work of criticism ever changed your opinion of a writer’s work?
I wrote a piece for the New Republic about Naomi Wolf and how The Beauty Myth was so important to me as a young woman in the late 1990s before feminist writings were readily available to me on the internet and in the wider world. Naomi Wolf opened my eyes to things that now seem like second nature to me: that dieting and constantly focusing on physical appearance is holding women back. I reread The Beauty Myth for the piece and found it trite and sloppy, but I’ll always be grateful that it was there for me in the late 1990s.

What is your opinion of the value of negative reviews?
I think they’re extremely valuable. I would love to be a staff critic who gets to publish reviews so regularly that I’d be able to throw in some pans and have meaningful discussions about them. But I’m a freelancer. Most of what I pitch are roundups and interviews and Q&As and trend stories, so I don’t often find the space to write negative reviews. If I do write negatively, I’ll go for pieces that critique the publishing industry as a whole rather than focusing on one specific book. And if I’m pitching a feature on a particular author, I’d much prefer to pitch one whom I admire.

When you are reviewing a new book from an author with previous books to his or her name, do you read the author’s backlist as well?
Of course, within reason. I should probably never review Joyce Carol Oates.

How important has social media been to you professionally?
Very. Job security being what it is, I find it so important to have a space that’s completely my own, that I can’t be fired from. As more and more publications cut back on book coverage, it remains crucial to me to have a space where I can write about whatever I want, and I’ve managed to find an audience for it. Plus, if I tweet an opinion about literature and it does really well, there’s proof of concept for potential publications that my opinion has resonated with others.

What do you think about the future of the publishing industry? And the future of the media landscape?
I’m answering these questions as I go into month two of quarantine. I’m too overwhelmed to make any guesses about what the future holds—I’m trying my best to just go day by day. But here’s what I know: Great books will continue to be written, and I’m confident that people will still be eager to read them and to talk about them.

Of those publications that still devote space to literary criticism, which are your favorites?
I love reading Bookforum and seeing which reviewers are paired with which books. There’s an art to that. Other favorites: the New Republic, the Believer, and Electric Literature.

What books that you are not reviewing are you most looking forward to reading in the near future?
I’m so attuned to the current publishing schedule that it’s a real treat to read backlist books. Penguin just reissued a really lovely collection of modern classics, including Passing by Nella Larsen and Before Night Falls by Reinaldo Arenas, and they’re high on my list.

The books editor of Entertainment Weekly discusses how he picks which titles to review and what he thinks books coverage will look like in ten years.

The critic discusses her reading process, the perfect pan, and the popular Twitter hashtag she created, #FridayReads.

Carlos Lozada, a Pulitzer Prize–winning critic at the Washington Post, on his reading process, the role of social media in his work, and more.

One of the most prominent and liveliest critics in the United States discusses whether or not literary criticism can be taught, the value of negative criticism, and more.