There’s a twist to why I invited you to this place,” Gabriele Romagnoli says as he leads me past the grand marble steps and neoclassic columns of the Palazzo delle Esposizioni, a 132-year-old museum and exhibition hall in Rome, to the discreet side entrance where we take the elevator to the roof. “Can you guess why I asked you to meet me here?” The elevator opens, and we pass into a massive, two-thousand-square-meter rooftop garden glassed in and transformed into a greenhouse by the architect Paolo Desideri in 2007, then transformed again into a restaurant run by the Italian celebrity chef Antonello Colonna. The decor features white tables and chairs in a distinctively postmodern setting with clean sweeping lines and twenty-foot-tall walls of glass. It’s a Bauhaus dream capping a white marble rooftop surrounded by the neoclassic landscape of Quirinal Hill, the second highest of Rome’s seven hills, where Quirinal Palace, the Louvre-sized presidential residence, looks down upon the Eternal City. 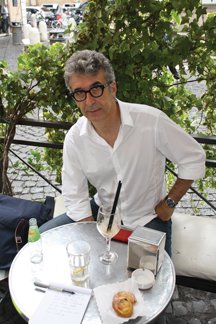 Romagnoli lives on the ground floor of a neighboring building, and he likes the restaurant, which serves a buffet lunch to the bankers and government officials who work in the area, because it is nothing like the traditional tourist’s romantic conception of Rome. “It isn’t some dark, crowded restaurant in Trastevere,” he says. “It’s like we are not in Rome here; it could be Germany or Amsterdam. You have Rome,” he raises a hand to indicate the beautiful building on the other side of the balcony railing from where we are sitting, “but it’s not like—arrhh—all around you.”

The author has introduced a theme I am to hear again and again from Italian writers: a desire to shake free from a past so impressive it is suffocating. In Italy, the shadows cast by the artists of the Roman golden age and the Renaissance still linger over the writers of the twenty-first century.

For instance, when I ask Romagnoli if there is a great Italian novel or some debate that parallels the endless American discussion about the “Great American Novel,” he shakes his head and tells me the great Italian novel has been written at least three times and that the competition is too stiff for there ever to be another. “La Divina Commedia by Dante; how can you write the great Italian novel when someone wrote a work that was science fiction, fantasy, history, and romance all in one, seven hundred years ago?”

Romagnoli’s own novels have been highly praised. At various stopping points in a Cinderella career, the author has written for newspapers, magazines, television, and film. He was the editor of Italian GQ, and at present he’s a columnist for Vanity Fair Italy and La Repubblica. But he made his bones as a fiction writer.

In 1988, Pier Vittorio Tondelli, an influential Italian writer who later died young of AIDS, sent out a call for young writers to contribute to an “Under 25” edition of an Italian magazine, and Romagnoli sent five stories. He had one accepted for his first fiction publication.

Romagnoli was a young journalist working the night shift for a Turin newspaper, and he wrote his fiction on one of those old computers with the lines of green text that were common in newsrooms in the 1980s. Manning the phone on the city desk in the early morning after the paper had been put to bed, he idled away the hours writing stories “just for myself.” He invented a game: He would transcribe the beginning of an actual news story that had come over the wire, then “change the ending, forget the story, and write what I wanted. The rule was to fill one page on the computer.”

A journalist friend in Milan told him a personal story one day and he wrote it down, changed the ending, and sent it back to her. Amused, she asked if she could send it to an editor friend of hers named Antonio Franchini, now famous but at the time a rookie editor with the Italian publishing behemoth Mondadori. Franchini called Romagnoli a couple of days later and asked him to send more stories. The writer remembers he had “seventy-something” stacked on his desk, but he hesitated. “I thought I needed to experience more pleasure and pain,” he says. He didn’t think his stories were good enough and didn’t send anything.

A week later, Franchini called him again. “Do you realize how many people send me their novels and stories and want me to publish them? I’m sitting here behind stacks and stacks of shit, and the one person I call and ask to send me something doesn’t send it,” he said. This time Romagnoli sent what he had, and Franchini liked it.

The reviews of his debut, Navi in bottiglia, 101 microracconti (Ships in Bottles: 101 Micro-Stories), compared him to the classical Greeks; the critics strained to flatter him using words he had to look up in the dictionary; he won two awards. “My life changed,” he remembers.

Thirty years later, at fifty-four, Romagnoli is tall and lanky, with steel-gray hair, a long face, black eyebrows curtained by chunky black-framed glasses, and a fighter jet of a nose. In a slim-fit white oxford, jeans, green sneakers, and a polished-steel watch, the writer resembles a younger, casual-wear version of Toni Servillo, the actor who starred in Paolo Sorrentino’s Oscar-winning La grande bellezza. Certainly, Romagnoli’s career has been as colorful as anything to be found in the film.

When Romagnoli grew bored in Italy, his Turin newspaper sent him to New York. Four years after dreaming of being a foreign correspondent posted to New York City, he found himself in Manhattan with an expense account. He chuckles. “It is trouble to realize one’s dreams so quickly.”

He lasted three years in New York before his attention wandered. He returned to Italy to write scripts for movies and television. “I hadn’t watched much Italian TV,” he says. “I hadn’t watched much American TV either, but I was thinking of an Italian Sopranos.” He wanted something groundbreaking, original, new. In 2001, he wrote a police drama, Distretto di polizia, in the tradition of Hill Street Blues. The series ran successfully, but soon after its start, he received a call from the press office of the Italian police. “The chief likes the series,” the spokesman told him. “The problem is the gay guy.” Romagnoli had invented a gay policeman, and the Italian police were not happy. You cannot film episodes outdoors in Rome without the support of the police department.  Shortly after Romagnoli left the show, the gay character “became straight.”

Unsatisfied with the constraints he discovered as a screenwriter, Romagnoli went back to journalism. After 9/11 he accepted a posting to the Middle East and filed stories from Cairo, then Beirut. He also continued writing fiction.

I ask Romagnoli to describe his writing process. “People have this idea you write the best sentences in a beautiful room facing the seaside,” he says. “My best lines, I got them from the bus, from the subway.” We talk about how he got his start, and he points out that there are no MFA programs in Italy. “Nobody really believes you can teach writing in six months,” he says, then sketches out the only class he could teach on the subject. “Find your own voice,” he would say. He smiles. “Then you go home.”

He checks his watch. His editor at la Repubblica, the Roman newspaper for the center-left, has assigned him to cover a story in the suburbs. Immigrants from Africa and the Middle East have attacked a bus after it refused to stop for them, which in turn incited a local neighborhood-watch group to turn vigilante and randomly attack immigrants. He’s supposed to ride the bus and interview whomever he finds on board. “My editor said that I lived in the Middle East, so I should be perfect for it.” He lifts his eyebrows suggesting that he’s unconvinced, then smiles and hurries off to make the bus.