While attending a reading by the American poet Moira Egan and her husband, Damiano Abeni, an Italian physician and translator, I meet the Italian poet Paolo Febbraro. Febbraro is worried that his English is poor, but he agrees to answer questions for this article via e-mail, and he eventually meets with me to discuss his life as a writer in Rome. 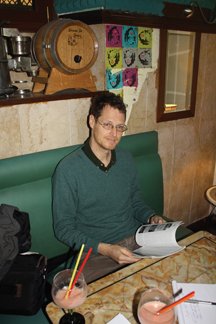 Febbraro is a hardworking high school literature teacher, and we meet during his lunch break at a café a block from the public high school where he teaches, just off the Piazza di Santa Maria in Trastevere. This ancient neighborhood, whose name refers to its position on the west bank of the Tiber, is popular with tourists and locals alike for its shops and restaurants.

Tall and lanky with reddish hair and a fair complexion that earned him the nickname l’Americanino when he was a boy, Febbraro explains that in 1984, when he was nineteen, he fell in love with the poetry of Giorgio Caproni, a famous Italian poet, and was inspired to begin writing poems of his own. Eager to continue to grow and improve, Febbraro followed the traditional route of writers in Italy: He looked for a mentor.

Since there are no MFA programs in Italy, ambitious young poets and writers instead correspond with or attempt to meet established writers, hoping to be adopted as a sort of protégé. Eventually, Febbraro was introduced to the poet and critic Giorgio Manacorda who, after listening to Febbraro describe himself and his work, asked to read his poems. “I always waited for the right moment and the right encounter,” Febbraro recalls.

Manacorda’s first responses to Febbraro were critical; he pointed out weaknesses. The younger man listened and reworked his poems until, after two years, he had produced a group that Manacorda was willing to recommend. With the support of this veteran writer and critic, the Milan publishing company Marcos y Marcos agreed to publish the work, Il secondo fine (The Second End), which won the prestigious Mondello Award.

Now an established poet with multiple books to his credit, Febbraro frequently returns the favor. “A lot of young poets send me their poems by mail for advice. I answer and give them advice. In the rarest cases, I can help them to publish.”

Once established, an Italian poet may earn invitations to literary conferences or to various literary-arts festivals; Pisa, Modena, Pordenone, and Turin host well-regarded ones. Poets and writers also submit to and are considered for literary prizes. It was at an awards ceremony for a prize in Tuscany that Febbraro met Seamus Heaney. Febbraro’s wife, Daniela, speaks English well, and she approached the Nobel Prize winner and then introduced her husband. “It is a bright page in my life,” Febbraro says. The ensuing friendship resulted in several trips to Ireland both to visit Heaney and to see the country. Febbraro also happily welcomed Heaney to Rome in 2013 when the Irish poet stayed at the American Academy in Rome, an institution that frequently hosts American and Anglophone writers and happens to be located near Febbraro’s home. An essay Febbraro wrote about the late Irish laureate was published in January.

Febbraro mentions his time in Ireland when he talks about his writing process. He says that many different things inspire him to write; he credits Daniela as both a muse and a teacher who introduced him to English literature and to psychoanalysis, and he says the Irish countryside has often inspired him.

By contrast, he is less enamored of his hometown. Born and raised in Rome—his mother was a middle school teacher and his father was a general in the branch of the military that, in the Italian system, is in charge of chasing tax evaders—he does not love the city. “The beautiful Rome is that of the ancients until the eighteenth century. Since then it is just buildings, buildings, buildings, a lot of traffic and noise.” He wrote a short story about these sentiments titled “I demolitori” (“The Demolition Men”) about “the violence of living in a place so packed.

“Rome is wonderful for the center, the Roman ruins,” he says. “But all around, it is absolutely not so good of a city.”

I ask him about the conflicts Gabriele Romagnoli was sent to cover, the fighting on the outskirts between immigrants and ethnic Italians, and he nods, saying that he has heard about the trouble.

“Italy is in a deep cultural crisis,” he says. “There are cuts in the financial provisions from the public sector. The problem is a historic problem. We had national unification too late. We had Fascism. We had a civil war. After 1945, we tried to rebuild. The American style—capitalist marketing—came too soon, before a bourgeoisie was formed. We haven’t the English tradition of an industrial middle class. Not too many people read.”

Indeed, Italy’s regional economic problems have only exacerbated an existing crisis for the nation’s book publishers. An April 2014 report by the Italian Publishers Association, a nonprofit group representing 90 percent of the national book market, describes significant declines in both book buying and reading in Italy as well as dramatic changes in purchasing habits as Italians, like Americans, decrease their visits to brick-and-mortar bookstores and shift their attention to the digital sphere.

In short, Italy’s traditional big publishing houses are struggling. While creative small publishers like La Nuova Frontiera, which specializes in translations by Spanish, Portuguese, African, and Latin American authors, and Playground, which is notable for its gay and lesbian literature, continue to carve out niches for themselves, the big players, a group that includes Arnoldo Mondadori Editore; RCS MediaGroup; Gruppo editoriale Mauri Spagnol; Feltrinelli; and Sellerio, all headquartered in Milan, are attempting to adapt to a marketplace that has lost 14 percent of its overall value in the past three years.