Despite the country’s economic struggles, Italy is still an attractive place to work and live, and immigrants continue to petition the government for entry. My wife and I are part of that ongoing influx. We have recently been granted Permesso di Soggiorno visas—the phrase means “permission to stay”—the Italian equivalent of green cards. The visas allow us to work and be taxed. As part of the immigration process, my wife and I were required to attend a class offering an overview of some of Italy’s basic laws. On November 24, in an immigration office near our home, we are ushered into a large nondescript room with drop ceilings and rows of plastic chairs to be shown a video featuring two English speakers who explain the basics of the Italian parliamentary system, then detail the negative consequences for would-be citizens who treat women poorly or drink and drive or use drugs. Surrounding us in the room are other immigrants. Our video teachers explain that there are 4.5 million foreign-born immigrants living in the country, which amounts to between 7 and 8 percent of the overall population and includes nearly 1.5 million Muslims. 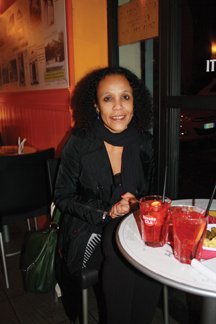 Ubah Cristina Ali Farah is the daughter of an Italian mother and a Somali father. Ali Farah’s parents met at Padua University, the eight-hundred-year-old Italian institution located near Venice. Ali Farah’s dad was on scholarship, and her mom was from nearby Verona. They fell in love, and when they finished their studies, they moved to Somalia. Ali Farah was three at the time. Her father was a proud nationalist who would have liked to educate his children in the Somali school system, but the schools were overcrowded and the teachers poorly trained. Somalia is a former Italian colony, so Ali Farah enrolled in an Italian school that was free for Italian citizens. She remembers moments when she was three or four when her bilingual development caused her anxiety. “I used to have these blackouts of language,” she says. “I wasn’t able to talk at all, so I started reading.”

Like her parents before her, she fell in love young—before she finished high school—and gave birth to her oldest son, Harun, when she was just eighteen. Then in 1991 the Somali civil war began, and everything changed. She fled with her parents, first to Hungary and then to Italy, and was forced to finish studying for her maturità on her own. She did well and was admitted to Sapienza University of Rome. However, her young Somali husband, unable to find work in Italy during the economic downturn in the nineties, moved to Canada, where he remains today.

All this occurred more than two decades ago. Today, Ali Farah lives in Belgium with her second husband, but she returns to Rome, where she lived for eighteen years, in December to promote her second novel, Il comandante del fiume (The Commander of the River), and she agrees to meet me at a café that she frequented during her years in the city when she lived in Testaccio, a couple blocks south of my home.

Testaccio is home to hipster cafés, art cinemas, and street art. For centuries, an enormous abattoir disassembled cattle and pigs on a bend in the river here and provided the city’s butchers with meat. The old cobblestone cattle yards and long warehouses with their horrific cast-iron butchering lines have been converted into a sprawling museum of contemporary art. Long before the area was famous for its slaughterhouse, this was the spot where merchant ships offloaded goods and supplies. At the time, fluids and grains were shipped in amphorae: long-necked clay jars. After hundreds of years of discarding these vessels, a literal mountain of olive-oil amphora shards—testae—rose above the neighborhood. The mound is still there, tree-topped and filling a square block, looming a hundred feet above the surrounding shops, restaurants, and apartments. In the nineteenth century, the pope used the hill as a stand-in for Golgotha. Passion plays were performed on its summit. Today, bars, restaurants, and discos are dug into its sides. Through plexiglass windows at the rear of these buildings, patrons can look at the piled remains of garbage from the Roman golden age.

I meet Ali Farah at Piramide metro station and walk into Testaccio, past the nursery school that her two younger children attended before she moved to Belgium. She explains that the public library next door agreed to allow her to work inside even during lunch hours, when it closes, after she told them her kids were at the school next door. When she lived in this neighborhood, she woke up each morning and went for a jog along the footpaths beside the Tiber. “I woke up today, and the first thing I did was to run. I don’t miss Rome at all,” she says, “but I miss the river.”

In Somalia as a teenager, Ali Farah kept a journal, but in the chaos and displacement of the war, she stopped writing, even for herself. She didn’t begin again until six years later when she was twenty-four. “After Sapienza [University], I worked for an NGO [nongovernmental organization] as a cultural translator,” a job that required her to help recent immigrants better understand Italian law and culture. “The NGO asked me to collect stories from the immigrants I worked with. I think that gave me the legitimacy to write. I was so modest. Who am I to write? But it gave me confidence.”

She started writing poetry then began writing nonfiction and journalism for an organization called Migrant News, whose mission was to report on the experience of immigrants to Italy from the perspective of people who had experienced immigration firsthand. Eventually a friend from La Sapienza with parents from Cape Verde told Ali Farah about a group that met once a week to discuss books. She attended a meeting, and members asked her about her writing then invited her to read her poems aloud at a reading. Here, a representative from an NGO asked her if he might use her poems in an anthology of writings by children of immigrants, adding to her confidence.

Before our interview, Ali Farah was at La Sapienza answering questions posed by students who dreamed of being writers. “I tell them: If you have something to say, you can become good,” she says. “It’s not something that happens suddenly. You just have to work hard.”

Like Febbraro, Ali Farah credits established writers and educators with helping her make contacts in the world of publishing. Alessandra Di Maio is a professor of Italian literature and comparative literature who has taught at schools in Italy and Massachusetts, and who became Ali Farah’s friend and mentor. “Alessandro said you have to stop telling people that you’re shy,” she remembers. “You must believe in yourself.”

Both of Ali Farah’s novels are about the lives of immigrants in Italy, and she points out that accepting immigrants is a new reality for Italians. “It’s hard for them to digest,” she says. She reminds me that during the twentieth century, many Italians left their homeland to find work in the United States and other countries. “Until recently, they were immigrants themselves.” One of her motives for writing is to remind Italians about the country’s colonial past while showing them how much migrants and children of migrants have become woven into the fabric of contemporary Italy.

For the time being, there continues to be tension between native Italians and the newcomers. Ali Farah writes about this in Madre piccola (Little Mother), her 2007 novel, told from the first-person point of view of three recent immigrants. “If you are born in Italy without Italian parents, you are not Italian. Italians don’t know anything about their colonial past. When I speak in Italian, Italians tell me, ‘Oh, your Italian is so good!’ Of course, it’s good! It’s my mother tongue.”

She’s more optimistic about the future. Prior to moving to Belgium with her family, she worked for six years for the Center for Somali Studies at Roma Tre University teaching the Somali language and archiving books, photographs, and stories about the experience of Somalis in Italy. The plot for her most recent book was inspired by one of these stories. “[Italians] will understand [the perspective of immigrants], but it’s just a question of time. The Republic is just a hundred fifty years old.”