Rome is like this. While enjoying an espresso atop an architectural masterpiece in the city center, it’s easy to miss the immigrant riot on the outskirts. There’s little crime in the touristy downtown, aside from the pickpockets, but the suburbs are rougher. The economic downturn that affected the world in 2007 continues to plague Italy. Unemployment hovers at 13 percent and is higher for young adults. 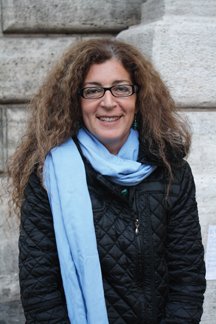 On the backside of the Aventine Hill, where I live, parkland traces an ancient defensive wall built by Caesar Aurelian, and prostitutes take up positions on the park benches starting in the early afternoons, their caked mascara and ruined faces incongruously peering out from the stream of retirees and fashionable professionals.

Some days the tension among Rome’s disparate parts is more visible than others. I schedule a meeting with the novelist Melania Mazzucco in the city center. But Mazzucco texts and explains that Italy’s largest labor union is planning to protest Prime Minister Matteo Renzi’s effort to pass a law making it easier for Italian companies to fire workers. On October 25, a hundred thousand laborers march through the streets of Rome waving banners. They chant and listen to speeches in the remains of the Circus Maximus, then stroll about taking selfies in front of the Colosseum.

Mazzucco is waiting for me the next afternoon in front of the armless and legless sculpture in the Piazza di Pasquino, adjacent to the Piazza Navona. She points to a poem on a piece of paper glued to the ancient figure’s pedestal and explains that it’s a political message. Members of the general public began expressing their dissatisfaction with the ruling authorities by putting messages on the statue shortly after it was discovered and placed in this location—the front of a palace owned by a cardinal of the church—in 1501. The messages are called pasquinate, a word that has migrated into English as pasquinades, after the statue. “Here they put up poems against those in power,” Mazzucco says. “It’s like a Speakers Corner, a place where the people can tell the truth.”

The novelist has distinctive dark, curly hair and narrow, black-framed glasses. It’s late fall, and she’s wearing a down jacket and a light blue scarf. “I’ve always written,” she says. “I was born into an artistic family. My father was a playwright; my childhood was spent in theaters. I remember I was amazed with how a woman fifty years old could become another person: a wonderful young girl or a queen.”

Her father typed his plays in a small room of their home, and when she was a child, she enjoyed copying him by typing little stories of her own. But as a teenager, she thought she might follow a different path. “You live without skin in some ways,” she says, explaining what scared her about the prospect of becoming a writer. “You are naked in front of life.”

Fascinated by memory, she thought she might like to become a doctor and study the workings of the mind, but the Italian school system does not encourage students to follow their passions. Instead, young people are slotted according to their aptitudes as indicated by a nationwide high school exam, the maturità. “You must choose [your field of study] when you are eighteen,” Mazzucco says. Still, she dreamed of at least a minor rebellion and embarked on a romantic plan to move to France and become a French writer. It didn’t quite work out. She moved abroad but “felt a bit lost,” she says.

At nineteen, she returned to Italy and finished a degree in Italian literature at Sapienza University of Rome before enrolling in the Centro Sperimentale di Cinematografia, a Roman school for filmmaking, whose most famous literary graduate is Gabriel García Márquez. For two years she took technical classes in how to direct, edit, produce, and write films. The school began to instill in her confidence that she might support herself with her writing. After she graduated, she earned money editing and selling screenplays.

She also took a job working for Treccani, the largest Italian encyclopedia company. The firm assigned her to help reduce the size of its encyclopedia from thirty-five volumes to just twelve. Mazzucco had to make a list of writers to be removed. She made the cuts but then felt sad about them. “I told myself I have to read these writers.” She bought their books and started reading.

When she was twenty-three, she experienced a crisis. “I was editing a screenplay, and I realized it was not so interesting. I realized I had a story to tell. I had to write a novel, not to publish it—I never expected to publish it—but I needed to write it to save my life.”

Her first draft reached fifteen hundred pages. She sent it to publishers and received dozens of rejections. Eventually, she began to cut it down. When it had reached a more manageable size, a medium-sized publishing company in Milan, Baldini & Castoldi, called her and expressed interest, but they insisted on more cuts, eventually reducing the book’s length to four hundred pages.

“It was not a huge commercial success,” she says. “Well, it was a good success for a literary novel.” That book, Il bacio della Medusa (The Kiss of Medusa), received excellent reviews, and Mazzucco began to think of herself as a writer. “I began to think that I could live off my words.”

Growing up, her family had lived in the northwestern part of the city, but this felt very far from the Rome depicted in postcards and movies. Romans complain about their unreliable public transportation and snarled surface roads, and Mazzucco explains that the people living in Rome’s outlying neighborhoods often feel as if they are living in another city. “My dream had always been to move to the center of Rome.”

After her third novel was published, she and her boyfriend committed to an azzardo, an adventure. They pooled all their money and signed a lease for an apartment in the city’s historic center. She’s never left.

In 2003, her novel Vita (Life), based on the life of her grandfather, who moved to the United States and experienced hardship and then returned to his native land, won Italy’s most respected literary prize, the Premio Strega. Later, the novel was translated and won awards in Spain and Canada, as well as placement on the “best of” lists of Publishers Weekly and the New York Times. Since the award, Mazzucco’s life has become busier. “There are book fairs. I traveled to fifty-five countries to promote the book.”

I ask her about censorship, and she says she hasn’t faced any difficulties—Italian laws protecting freedom of speech are similar to those in the United States—but she mentions that her last book caused a bit of a scandal. “It is about a girl with no mother but two fathers. Someone tried to take a teacher who assigned it to court. I was not surprised that the neo-Fascist politicians hated my novel, but I was surprised that such a tender novel created a scandal.”

Things have improved for female writers since the era of her grandmother, Mazzucco says, when female writers fought to be referred to as scrittori (“writers,” using the male plural ending) rather than scrittrici (“writers,” using an arguably pejorative, diminutive ending). But sexism remains an issue. “I was the last woman to win the Strega, in 2003,” she says. “Since I won, it has been all men.”

Our focus shifts to the economic downturn and its impact on Italian writers. She says she’s worried about the fate of Italian literature during the current era. “In Venice in the sixteenth century, a literary essay could sell two thousand copies. Now it’s the same. A book on literary theory could sell two thousand copies. That makes me suffer a lot.

“Our problem was that the high society read; the middle class never became readers. It is a historical problem that our writers were aristocrats, even in the twentieth century. You couldn’t afford to write if you didn’t have family money.” This changed in the 1960s when the baby boom and a stronger economy enabled the middle class to afford the securities of a home and a car, but the current situation has caused Italians to wonder if those days of financial stability are slipping away, she says.

Fifteen years ago, Mazzucco points out, young actors and writers could still find semiaffordable places in downtown Rome. “Now it’s mostly tourists.” She pauses long enough for me to hear the people speaking English at the café tables all around us. “Now it’s different,” she says.