by
Staff
News and Trends
March/April 2019

With so many good books being published every month, some literary titles worth exploring can get lost in the stacks. Page One offers the first lines of a dozen recently released books including Casting Deep Shade by C. D. Wright and The White Card: A Play by Claudia Rankine. 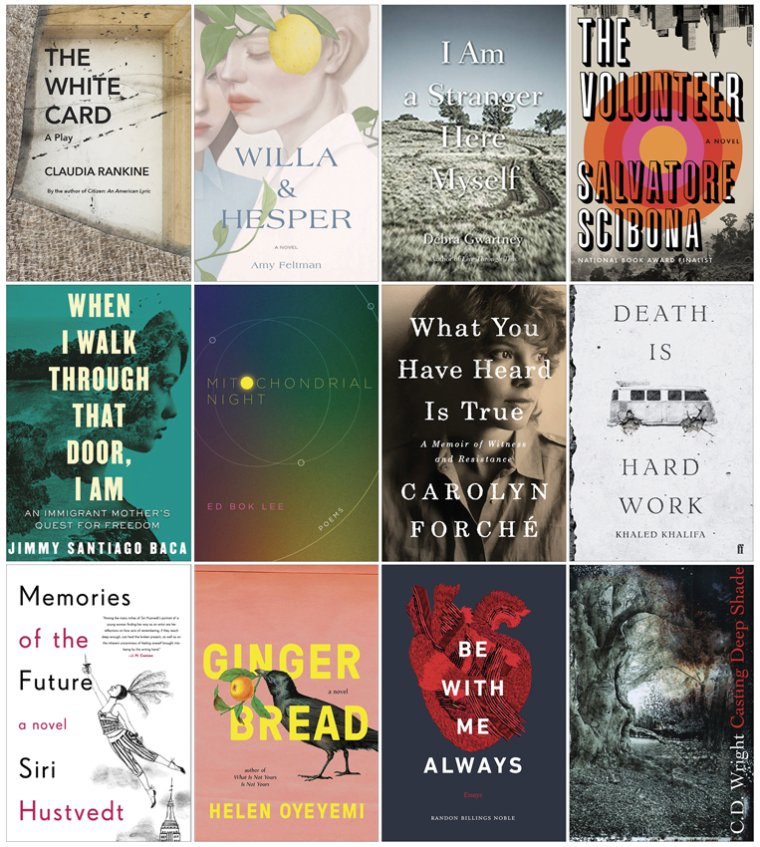 “It is near the end now.” What You Have Heard Is True: A Memoir of Witness and Resistance (Penguin Press, March 2019) by Carolyn Forché. Fifth book, first memoir. Agent: Bill Clegg. Editor: Christopher Richards. Publicist: Sarah Hutson.

“Two hours before he died, Abdel Latif al-Salim looked his son Bolbol straight in the eye with as much of his remaining strength as he could muster to extract a solemn vow and repeated his request to be buried in the cemetery of Anabiya.” Death Is Hard Work (Farrar, Straus and Giroux, February 2019) by Khaled Khalifa, translated from the Arabic by Leri Price. Fifth book, novel. Agent: Yasmina Jraissati. Editor: Jeremy Davies. Publicist: Brian Gittis.

“A man is following me on US-93 in Idaho, his red truck a fire-cracker in my rearview mirror.” I Am a Stranger Here Myself (University of New Mexico Press, March 2019) by Debra Gwartney. Second book, memoir. Agent: Gail Hochman. Editor: Elise M. McHugh. Publicist: Adelia Humme.

“It began one day at the shore.” Be With Me Always (University of Nebraska Press, March 2019) by Randon Billings Noble. First book, essay collection. Agent: None. Editor: Alicia Christensen. Publicist: Anna Weir.

“I’m always trying to do something new, which is usually something I’m afraid of.” —Shane McCrae, author of The Gilded Auction Block

“I do not allow rules and regulations to dictate my writing—it’s one thing I can control.” —Paige Ackerson-Kiely, author of the poetry collection Dolefully, a Rampart Stands

Joking by the Graveside: A Q&A With Elizabeth McCracken
by Michele Filgate | Online Exclusive 2.4.19

The author of six books, including most recently the novel Bowlaway, out this month from Ecco, talks family, myth, feminism, humor, and the stories we inherit.

Jimmy Santiago Baca reads from his new poetry collection, When I Walk Through That Door, I Am: An Immigrant Mother’s Quest for Freedom, published in February by Beacon Press.

Debra Gwartney reads an excerpt from her memoir I Am a Stranger Here Myself, published in March by University of New Mexico Press.