What is the most exciting part of bookselling for you?
I have to say, focusing on a book you really love and think that other people will love is really cool. My favorite book of 2008 was Wrack and Ruin by Don Lee. I loved the book, but it was so hard to sell in hardcover. It’s still a slightly difficult book to sell in paperback, but I’m thrilled every time we do. I want to take the books I really love—that are offbeat—and make a difference with them. It’s a little harder now because I have too few booksellers on my staff to be reading broadly. But I love discovering a book that two or three people liked, especially when, say, this person reads this way [points to the left] and that person reads that way [points to the right].

Yet they both liked the same book.
Exactly. In the Woods by Tana French is a great example. We were one of its top sellers. It was on the best-seller list for about a year in paperback, but in hardcover there were only about five stores selling it. And the thing that was so cool was that mystery people liked it and fiction people liked it. I always look for things that are “high” and “middle.”

Do you think most people come into a bookstore knowing exactly what they want—or wanting something but not knowing what it is?
I think bookstores have really changed in that a much higher percentage of the customers who are left don’t know what they’re coming in for. The people who know exactly what they want are more likely to jump to the Internet. The Internet doesn’t browse that well compared with a bookstore. So my feeling in the store is that you have to find a lot of ways to sell people books that you like.

My other feeling is that customers need confirmation that this is a book they should buy. They don’t want to hear from just one person. They want to hear maybe two or three different ways that this is a book that’s important. This is one of the reasons that in the front of the store I have a book club section; I have the IndieBound best-sellers; I have my staff picks; I have Boswell’s Best, which is really like a buyer’s pick; and I have prizewinners and what’s in the media. My idea is that—especially with hardcover—I will put the same book in two or three different places if it belongs there. That way maybe someone will get confirmation from three different sources that this is the book that they want to buy.

Are there any recent books that were crossovers like this?
I love Chris Cleave’s novel Little Bee. I said, “I’m going to do anything to make this book work.” I got to read it really early, and I really liked the book. I think it’s the perfect book in that it allows you to read it to the level of your interest. You can be a middle reader and read it, or you can be a high-end reader and read it. And because the book leaves some things unsaid, you can interpret the ending in several different ways, which makes people obsess about it. Everything was perfect about it for me. I loved the jacket. Loved the jacket. I was so worried, you know, because the book has another name in England. It’s called The Other Hand. And I loved the cover of The Other Hand in hardcover, but I despised the cover of The Other Hand in paperback.

So you can judge a book by its cover? Or does this prove that you can’t?
A really good book with a really bad jacket is just  really hard to sell. It gives the customer the wrong message.

Was there ever a book you’ve loved that you couldn’t sell because of the cover?
We were just talking about that. One of my booksellers just showed me one, and it had a very “merchy” cover.

What do you mean by that?
The British book business—the merchandise part of the business—is not driven by Walmart or Target. It’s driven by supermarkets. Tesco and Sainsbury’s do the big quantities. So when you sell lots and lots and lots of copies of a book in Great Britain, you sell them in the supermarket. They have bookstores, basically, within the supermarkets. The point being, I looked at that book jacket and I said, “That’s a very Tesco cover.” Then, when the author came for an event, he admitted that they’d just placed a really big order. [Laughter.]

So the cover is a bigger part of book buying than we’d like to admit.
Oh, I think publishers would say that it’s a big part of the decision-making process.

What about digital books, which don’t have covers?
I don’t know. Good luck! [Laughter.] But they have free downloads! Honestly, I have no idea. I hope to be getting some of the business. I hope so. I have customers who really want to do downloads through us. They want to come here and browse and then download the books from us. Just like they’re buying the books, in spite of the fact that they could buy them online. They like the space, they like the browsing, and because Schwartz just closed they get the idea that their purchases are connected to the store’s staying in business.

But I don’t take that goodwill for granted. And I feel that the way I can keep that goodwill is to continually try to make things better. I have to have very personal relationships with my customers, and I try to keep my personality very heavily in the store. I have a very distinct personality. I think I have a good sense of humor and I’m very quirky and I’m very respectful of differences and of people who like different things. I know what I like and I know what my customers like.

What about people who just moved to Milwaukee and have never heard of Schwartz? How will you bring them into the store?
It’s a tough thing. I feel like the store is interesting enough and there are fewer and fewer independent bookstores like this around, and so I feel I just have to keep it in the public eye. That’s why I do a lot of publicity. I throw out a lot of press releases. I do a lot of events. I try to do an offbeat spin on the events. For my first event last year I had the woman who owned the bookstore here [before Schwartz took over the space] introduce Jane Hamilton. She talked about what it was like being one of the first booksellers to discover Jane Hamilton, and how she’d once put together a bus tour to the apple orchard where The Book of Ruth took place.

There’s also a memoir about knitting coming out and I’m trying to get one of the knitting stores to come in and set up a table. We’ve talked about having some craft people come in too for something like that. For example, we had Scott Buer, who runs Bolzano Artisan Meats, the first dry-cured meat company in Wisconsin, come to the store and he did a sampling of his pancetta. 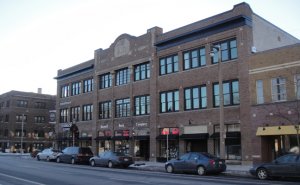