From Booksellers to Owners

When the pandemic brought their business to a standstill in March 2020, the owners of Trident Booksellers & Café in Boulder, Colorado, initially furloughed all but five of their staff of about twenty-two. “Everything went sideways when COVID hit,” recalls co-owner and general manager Peter Jones. “We had to do some major pivots to stay in business.” At the top of his mind was also the well-being of Trident’s staff: Witnessing the precarity of the bookstore’s team, who as artists and nontraditional workers lacked the social safety nets that other careers provide, Jones persuaded the store’s three owners to transition to an employee-owned model, a move that he hoped would give the employees a sense of stability. 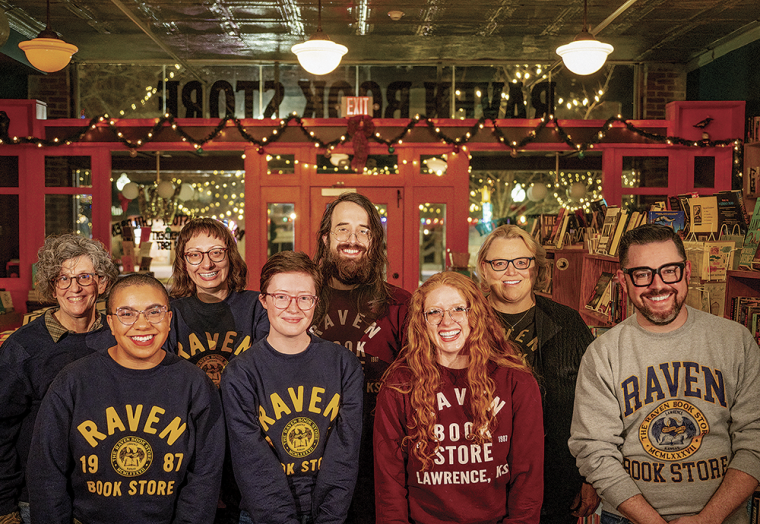 Alternative ownership models have gained traction in bookstores across the United States in recent years. Porter Square Books in Cambridge, Massachusetts, began to transition to a worker-owned model in 2018, and Pilsen Community Books became Chicago’s only employee-owned bookstore in early March 2020. But Trident’s transition exemplifies how the pandemic might be accelerating the push to reshape the security and professional position of booksellers across the country.

At Trident this reimagining of the business model began with the owners coming up with a fair market value for the business and splitting it into one hundred shares to offer to employees. They set terms: In order to buy in, employees needed to have worked at the store for at least one year, and they could purchase as many shares, each valued in the low four figures, as they could afford. Shares adding up to 51 percent of the business were made available to new employee-owners; today 44 percent of the original shares are held by employees, with another 7 percent still available for purchase. (Jones says that if future employees want to buy in when the remaining shares dwindle, they’ll start to split shares into fractions.)

The original three owners also agreed to work shifts like any other staff member. “In essence they became employees, and employees became owners,” says Jones, who adds that so far the staff are finding it to be an equitable system. “No matter how many shares you have, you have one vote, so everyone has an equal voice,” Jones explains. At quarterly meetings they evaluate profit and determine how much to disburse and how much to put back into the business. “Employee-owners make money via the shifts they work and via profit sharing. Profit sharing works as a percentage of the shares they own, so if I own five shares, I get 5 percent of the profits for that quarter. Even if it wasn’t a lot of cash, they would know they had some ownership,” says Jones.

The Raven Book Store in Lawrence, Kansas, has developed its own version of this model. Owner Danny Caine sold 49 percent of the business to seven staff members, who became employee-owners. He says the idea emerged organically through conversations with the managers and long-serving booksellers in the spring of last year; soon he got to work with his lawyer and his accountant to see how he could make it happen. He also looked to other stores, such as Porter Square, as models and took inspiration from his own experience: Caine started at the Raven as a bookseller in 2015 and bought the business in 2017 thanks to a loan from longtime owner Heidi Raak. “I borrowed from her instead of a bank. We organized a deal so I could pull it off, which I’m forever grateful for.” Similarly the seven new employee-owners at the Raven bought in with the help of loans from Caine, which they will repay via store profits.

Caine maintains a controlling stake, but he utilizes a consensus-driven approach to decision making. “It’s written into the bylaws of the sale that certain decisions require 70 percent or more of ownership votes, but again, with our consensus-driven promise to each other, it’s highly unlikely we’ll ever have to count votes,” he says. “I know there will be disagreements, and there already have been, but time and again this group has shown an ability to work through differences to find consensus about the best direction for the Raven.”

Like Jones, Caine sought to create an environment that was more equitable and sustainable for all team members. He sees the move as an extension of his other labor activism. Caine is well known for speaking out against Amazon, which led to his book How to Resist Amazon and Why (Microcosm Publishing, 2019). “Learning about what I think is the wrong way to run a company and to treat your workers got me thinking about the right way to do things,” he says. “It’s so hard to make a living wage in bookselling. So many bookstore jobs are part-time or low-paying or dead-end. Employees move on and you lose talent.” Caine wanted to find a way to do things differently that would encourage the carefully selected well-read booksellers of the Raven to stick around, which they seemed to already be inclined to do.

“We have had no turnover since March 2020. I thought: It seems like these people are interested in this job, and we’ve got a great team.” Caine illustrates this success with a comparison: “Amazon warehouse jobs last six to eight months. They believe training is cheaper than retention. I think the opposite.”

Of course employee ownership comes with its own challenges. Jones says, “There’s been a learning curve. We have to communicate together as a group of owners and not just air our grievances, but talk about how we work together to improve the store and what are our goals.”

Jones says the input from new ownership has inspired Trident to stock and display a more diverse selection of books, and, in general, employee-owners are taking on more responsibilities, such as ordering and managing deposits. Jones adds, “For writers, it has also made us much more approachable and much more democratic. It’s harder for us to say no to a self-published writer or someone without an audience. We’re like, ‘Okay, we gave it a try with our staff and look at the benefits. Now let’s look at authors who don’t necessarily have a platform.’”

The bookstore’s events have changed as well due to the younger demographic of the new owners, says Jones. “We work with the MFA program at the University of Colorado at Boulder now, and we host a party/spoken word/poetry slam/dance thing. What twentysomethings want to do in a literary space is way different than an old stodgy bookstore would do.”

In an era of online retail, one key to indie stores’ survival may prove to be the move toward professionalizing and stabilizing the role of bookseller, which in turn enhances the offerings of their stores, and the trend toward employee ownership is part of that. Caine is an advocate for industry-wide change. “I’d love to see even more momentum on professionalizing the role of booksellers. I’m not sure it’s moving as fast as I’d like it to. From employee ownership to unionization, more and more people are talking about trying to improve the dignity of work in this industry, and that’s really inspiring to me.”

Lynn Rosen is a publishing professional and the store manager of the Barnes & Noble in Wilmington, Delaware. She is the author of Elements of the Table: A Simple Guide for Hosts and Guests (Clarkson Potter, 2007).

Save Indie Bookstores
by Maggie Millner | News and Trends 6.10.20

A campaign started by James Patterson has raised more than $1.2 million to help indie bookstores struggling to stay afloat during the pandemic.

The owner of the recently opened Harriett’s Bookshop, which specializes in the work of Black and women authors, talks about the arts as a tool for social change and her vision for the store.