The exterior of the Second Shelf bookstore in London resembles a K2 kiosk, the iconic red telephone booth that dots the city’s streets. The shop, which stocks modern first editions, manuscripts, and other rare and rediscovered books by women, is all about standing out. American writer A. N. Devers opened the Second Shelf in London’s Soho neighborhood in November 2018 because she refused to let women’s literary work be overlooked or erased. Her mission: to encourage collectors to acquire work by women and “help redress the literary canon and imbalance on bookshelves.” 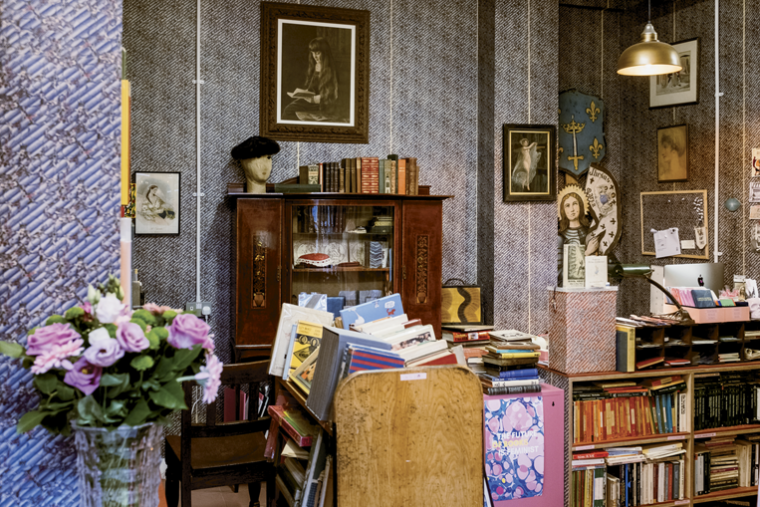 A chromolithograph cutout of Joan of Arc, made in the year of her beatification, presides over the interior of the Second Shelf.  (Credit: Sarah K. Marr)

Devers was motivated to open the Second Shelf after observing that the rare-book trade was dominated by men. As a contributor to the rare-book collectors’ magazine Fine Books & Collections and a frequent visitor to book fairs at which a rare-book dealer friend had a table, Devers noticed that not only were most dealers men, but also those dealers were selling mostly books by men. “The books by women I was interested in weren’t necessarily at the fair, or they had lower price tags on them than books by their male contemporaries, which honestly offended me,” she says. Beyond the personal reaction, Devers realized this asymmetry had far-reaching implications. “I understood how the market of rare books had a direct impact on the legacy of writers and was a part of the imbalance and sexism women writers have faced in their lives—and in their afterlives.”

Eventually Devers, who had been living in New York City, was prompted by her interest in rare books to move to London, which she calls “a great rare-books town.” After hosting a successful Kickstarter campaign that raised £32,000 (approximately $39,448) for the project, Devers opened her shop, which measures only about 300 square feet but is packed floor to ceiling with approximately six thousand books. And while she may not be able to predict what might sell, Devers stocks books that reflect her own taste as well as those she knows to be celebrated and beloved by other readers. Devers has also sold authors’ personal items, such as a red wallet and notepad owned by Sylvia Plath, and will offer one of the poet’s skirts for sale at an upcoming fair in Brooklyn, New York.

As for that bright store exterior, Devers had to fight her landlord to get approval for the color. The inside of the store, along with the store’s logo, is designed in vivid hues of pink and purple. “I wanted to buck the trend and absolutely embrace pink and purple and hues atypical for the world of rare books, which can be very dark green, red, and blue,” Devers says.

The Second Shelf celebrates its first anniversary on November 20, the same birthday as its owner. In one year the shop has built a loyal customer base and a lively environment, with customers who are eager to support her mission. “I’m proudest, to be honest, of having made it through this first year and managed to get people in the door and shopping for books that cost more than what they would find at a new bookstore—and enthusiastically,” Devers says. Future goals include launching an online store and continuing publication of the store’s print literary magazine, The Second Shelf: Rare Books and Words by Women, which showcases photographs of rare books, in addition to essays, poems, interviews, and profiles by women. Lauren Groff, Elizabeth McCracken, Cheryl Strayed, Rachel Syme, and Jesmyn Ward are among the women writers on the magazine’s advisory board.

Not that everything is rosy (or pink or purple). Challenges abound, and practical matters such as paying the rent—it recently went up significantly—dominate Devers’s to-do list, as well as getting a handle on her new managerial role and the major task of sourcing every book on the shelves. Nonetheless Devers is optimistic. “We talk about women writers who we love and learn about ones we don’t know every single day in the shop,” she says. “I hope we’re in a new phase of feminism that is here to stay. In the meantime I’m glad we are inspiring readers and collectors.”

Lynn Rosen is a book-publishing industry professional who is currently a bookseller and a bookstore owner outside of Philadelphia. She is the author of Elements of the Table: A Simple Guide for Hosts and Guests (Clarkson Potter, 2007).