In April, Deesha Philyaw gave a reading that in many ways felt like any other. The multipurpose room where the event took place was large and open, and some fifteen attendees clustered in a semicircle, wearing shirts and jeans in various neutral colors and blue. Philyaw read from her Story Prize–winning collection, The Secret Lives of Church Ladies, as she has on numerous occasions since it was published by West Virginia University Press in 2020. Then she answered questions about craft—where to find story ideas, how to handle writer’s block, and the challenges of writing about other people, especially those who haven’t been kind to you. 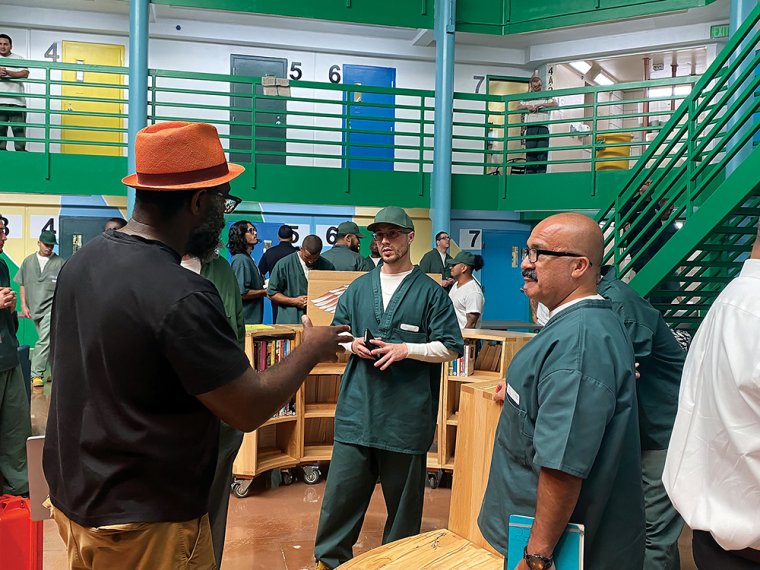 But Philyaw was not in the usual bookstore or school. She was among an audience of people incarcerated at Patuxent Institution in Jessup, Maryland. Philyaw was acting as a Literary Ambassador for Freedom Reads, an organization founded and directed by poet and attorney Reginald Dwayne Betts that seeks to bring the spirit of literature into prisons. From a seed of an idea he had in summer 2020 to install libraries in prison housing units nationwide, Betts has managed to expand Freedom Reads into a multifaceted organization that also brings theater productions, book clubs, and world-class writers inside carceral walls. In 2022, Freedom Reads brought Philyaw and Deb Olin Unferth to Patuxent as well as Terrance Hayes and Jacqueline Woodson to Otisville Correctional Facility in upstate New York for discussions that were the first of their kind for many of the book lovers and writers inside.

“Books can be a light amidst all that lack of hope, lack of justice, lack of healing, lack of possibility,” Philyaw says.

Even beyond that, Freedom Reads is invested in “what books can do, in terms of helping you discover who you are, who you want to be, who you might have been,” Betts says. Now in his early forties, Betts is the author of a memoir and three poetry collections, including Felon (Norton, 2019), and a MacArthur “Genius” Fellowship recipient. He experienced the transformational power of books firsthand during his own stint in prison, where at sixteen he began a term of eight years for carjacking and robbery. In the depths of solitary confinement, Betts yelled, “Somebody, send me a book!” and was rewarded with a copy of the wide-ranging poetry anthology The Black Poets, edited by Dudley Randall. After his release in 2005, he eventually graduated from Yale Law School. But instead of following his plan to become a public defender, Betts started Freedom Reads, originally dubbed the “Million Book Project,” which in 2020 received a $5.25 million grant from the Andrew W. Mellon Foundation. The expanded project officially became an independent nonprofit this summer.

Freedom Reads’ core offering remains its “Freedom Libraries,” meticulously designed modular structures that seek to meet the tight regulations of prison architecture while promoting community. Their curves are a nod to Martin Luther King Jr.’s idea of a universe that “bends toward justice,” Betts says. The maple, oak, walnut, or cherry wood is chosen specifically for aesthetics: “There’s nothing this beautiful in prison,” adds Betts. As of this writing, some fourteen Freedom Libraries have been installed in five states, with the goal of installing 150 libraries in 2023 and 375 by 2025.

The libraries will open the way for more Literary Ambassador events at the prisons where they are installed, Betts says, as well as his own performances of his poetry and an upcoming theatrical adaptation of Richard Wright’s novel Black Boy. The varied arms of the nonprofit may sound disparate, but Betts contends they’re related: “The library is the physical embodiment of literature, but the living embodiment of literature is a writer.” And perhaps theater represents them both, animated and swirled together.

While other organizations that connect incarcerated readers with literature take a more individualized approach, sending titles by request, each Freedom Library holds five hundred carefully curated books: The Black Poets next to The Count of Monte Cristo, the Odyssey and Iliad shelved near Invisible Man, and titles by Toni Morrison and Sonia Sanchez. About a quarter of the collection’s books were published after 2015, more than half are by writers of color, and about 10 percent are Spanish-language texts.

“We’re excited about the idea of a conversation that transcends the walls,” says Tess Wheelwright, deputy director of Freedom Reads. “If I’m in a segregated housing unit in California, and you’re in a dorm in a minimum-security prison in Minnesota, there’s something powerful about the fact we’re exploring the same book collection.”

Freedom Reads takes that idea one step further with its Book Circles, providing multiple copies of a book from the library in a single prison to readers who are encouraged to discuss it in the style of a book club. “Synchronous reading builds community,” Wheelwright says. By combining multiple forms of access to books, ambassador visits, and theater, she says, Freedom Reads offers inmates with different levels of literacy or comfort with reading various paths into what she calls the “embodied world of letters.”

People often misunderstand why Betts founded Freedom Reads, assuming that the program is meant to fill some special need for books in prisons beyond their universal value. “Prison is not the reason why books matter,” he says. “Books are the reason why books matter, and it just so happens that they are absent in prison.” He thinks of books as the “bedrock of civilization.” Without help, incarcerated people can’t access that bedrock. That’s where Freedom Reads comes in.

Patrick Berry, author of Doing Time, Writing Lives: Refiguring Literacy and Higher Education in Prison (Southern Illinois University Press, 2017), agrees. He sees Freedom Reads as a key piece of the puzzle in enabling incarcerated people to find meaning and success. There are, of course, no easy solutions. But the “windows of opportunity that can come through books” are not to be underestimated. The overwhelmingly positive feedback about Freedom Reads programming from inside seems to confirm Berry’s point. Incarcerated readers often enthuse about the beauty of the Freedom Library shelves, eager to share what they’re reading and the way they’ve organized their books and kept track of checkouts.

That spirit came through during Philyaw’s visit to Patuxent: “My mindset was, ‘I’m talking to people who care about books and who love books like I do,’” she says. Yet she remained mindful of the extra difficulties incarcerated writers face—difficulties she has learned more about while keeping in touch with some of the incarcerated people she met. “I’m trying to write and stay encouraged about becoming a writer,” they tell her. “But I’m trying to stay encouraged while I’m in a place that’s designed to dehumanize me.”

Acting as a Literary Ambassador has given Philyaw a sense of agency, and she is glad to be able to support her new writer colleagues in prison. “I feel a little less powerless knowing that my book, my voice, my presence can make a difference to someone else—hopefully the way books made a difference for [Betts],” she says.

Alissa Greenberg is a volunteer editor at San Quentin News, produced by individuals incarcerated at the California state prison; a staff writer at Nova on PBS; and a freelance journalist.

Reginald Dwayne Betts, whose latest poetry collection, Felon, is out now from Norton, sits down with poet and activist Mahogany L. Browne for a conversation about political poetry and the realities of the U.S. prison system.

The Prisoner Express program, created by Gary Fine in 2004, supports people who are incarcerated by sending them curated packages of books and offering educational programs.