In the first letter Danny Harris wrote to Gary Fine from solitary confinement, he made what seemed to Fine like a simple request. “‘Books are like a window to the world,’” Fine remembers Harris writing. “‘I have no window.’” He wondered if Fine could send him one. 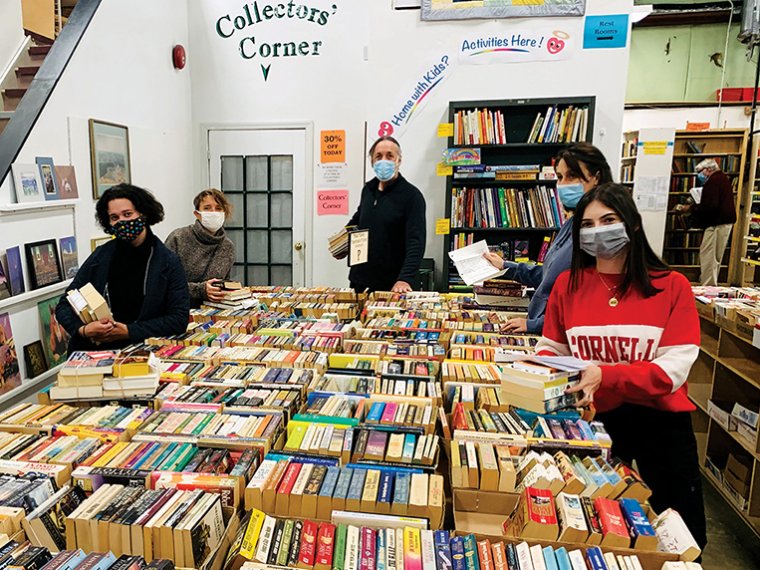 Fine, who works at the Durland Alternatives Library on the Cornell University campus in Ithaca, New York, responded that he was sorry, but his library didn’t send books into prisons. When, to his surprise, he received a follow-up soon after thanking him for writing to Harris “like I’m a real person,” it got Fine thinking: Maybe he could send Harris some books. The epistolary relationship they developed over the next several years eventually grew into something much bigger. Prisoner Express, the sprawling literature-by-mail program Fine oversees from his corner of Cornell, has provided windows to the world for more than thirty thousand people living in incarceration in forty-nine states since its inception in 2004.

Prisoner Express doesn’t send its correspondents just any books; its packages are curated by a mix of Cornell students and committed locals, part of a team of some four hundred volunteers that also includes remote contributors. Skimming the multicolored multiplicity of used books the program collects for this purpose, a volunteer might first find titles to fit “bodyweight workout, exercise, atheism, and witchcraft/occult,” as one recent letter requested, then move on to “science fiction, historic fiction, tearjerkers, the classics, The Hunchback of Notre Dame.” The task also requires taking into account the particulars of prison mail regulations, which vary by institution and may require hard-, soft-, or no-cover books, or specify maximum numbers per shipment. If participants are writing from facilities that allow only one or two books at a time, for example, Fine might send them a Norton anthology—something juicy.

These days, dictionaries are Prisoner Express’s most requested books. They used to be hard to source, but with definitions as close as the nearest screen, Fine now finds hundreds of them at book sales. Other perennially popular genres include self-help, chess, ancient history, and philosophy. Once the head of a white-power prison gang wrote asking for Nazi history; Fine sent him a book by Elie Wiesel. Years later he received a letter from the man’s lawyer, along with a donation. His client, the lawyer wrote, had read the book and then told the members of his gang to have their swastika tattoos removed.

Fine is deeply familiar with a book’s power, as a survivor of child abuse that saw him locked in a room and starved for days at a time. “If I could get a book wherever I was being held, it made all the difference in the world,” he says. So when prisoners receive their packages, each comes with a personalized, handwritten note, since many early book recipients told Fine that the mail they received was the most important thing in their lives at the time.

As the program grew, Fine started asking his correspondents to respond to short personal prompts; he then collated the results and sent them to the group. Reading the narratives of other people’s similar experiences was powerful, particularly for those who wrote from solitary confinement or deep social isolation, and they told him so.

Prisoner Express now runs a broad variety of educational programs on topics from meditation and chess to screenwriting and ocean science—all using this Socratic-dialogue-by-mail model, which Fine compares in its unifying power and rhythm to a church’s call-and-response. The program’s songwriting teacher figured out a way to have her students, scattered across prisons, write a song together. Last year Fine managed to get his hands on five hundred copies of Slaughterhouse-Five and led a book club. The science education volunteer named her newsletter “Plasmodesmata,” which refers to “channels to exchange information between cells” in biology.

Fine says that although books can provide respite, Prisoner Express’s programming is not about escapism. Instead it is “material that takes you deeper inside yourself, a chance for reflection, exploration, and healing,” he argues. Dave Gordon, a participant for fifteen of his more than twenty years of incarceration for conviction of a sex offense, credits Prisoner Express’s journaling program (in which volunteers respond through letters to the innermost thoughts of people in prison) with the personal growth that allowed him to eventually be granted parole. In prison Gordon read continually—by his estimate, some sixteen hundred books during his sentence—and wrote twelve hundred pages in his first year of journaling. “I wanted to understand where I had failed in society,” he says. “How come my values weren’t strong enough to keep me from going to prison? Something was broken in me.” Gordon eventually used what clarity he found in his books and writings to educate others, preparing presentations about emotional development and vulnerability aimed at other sex offenders.

He joins a chorus of people in prison all over the United States who credit Prisoner Express with not just their education, but their well-being and survival. Jonathan Holeman, who is serving multiple life sentences with no possibility of parole, recently wrote to Fine to say that Prisoner Express helped him to get his GED diploma and to encourage about twenty others to do the same. Prisoner Express “motivated me to keep learning during a time in life when I had little belief in hope for anything better,” he wrote.

In a letter to Prisoner Express’s volunteers, Christopher Banks wrote, “You all become our families because you’re all there more than other people for us.” And Keith Pertusio put it simply: “Thanks for motivating me to write. It is a part of my recovery. I am a better person when I write.”

Gordon maintains that without Prisoner Express, he would have died by suicide long ago. He chokes up remembering a day when, after a prison presentation, a young man approached him. The man hadn’t known how to tell his mother about his crime, he said, and had been planning on killing himself. “I know now that something was broke inside of me,” Gordon remembers the man saying. “I can tell my mama that I know what it is now, I’m going to fix it, and that this will never happen again. That she can be proud of me.”

Gordon pauses, taking a deep breath. “That emotional catharsis that happens between you and someone seeing the light is so powerful. And I couldn’t have achieved that without Prisoner Express.”

Alissa Greenberg is a volunteer editor at the San Quentin State Prison newspaper, San Quentin News; a staff writer at Nova on PBS; a contributing editor of Bay Nature magazine; and an occasional freelance journalist, reporting stories at the intersection of community, culture, science, and business.

The Impact Library Program, an initiative of the nonprofit Little Free Library, brings free miniature libraries to communities where books are scarce to encourage a love of reading and improve literacy across the country.

The Ford Foundation and the Andrew W. Mellon Foundation have launched a fellowship program that honors disabled writers and artists in a variety of disciplines with grants of $50,000 each.