In July Bin Ramke announced his retirement as editor of the Contemporary Poetry Series (CPS) at the University of Georgia Press. Ramke edited the series, which annually published four books of poetry found through two contests—one open to poets who had not published a book and the other to published poets—for twenty-two years. The list of poets, chosen by outside judges, who were published in the CPS during Ramke’s tenure includes Mary Jo Bang, X.J. Kennedy, Timothy Liu, Martha Ronk, Terese Svoboda, Liz Waldner, C.D. Wright, and Peter Sacks. 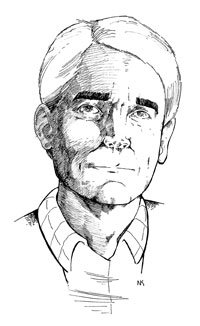 It’s an impressive lineup, but it was the last name on the list that touched off the firestorm—fueled by allegations from Alan Cordle and those who visit his Web site, Foetry.com—that influenced Ramke’s decision to retire. Here’s what happened: In 1998, Ramke enlisted Jorie Graham as one of the judges for the CPS; in January 1999 she chose a manuscript by Peter Sacks, who teaches literature and creative writing at Harvard University. In 2000, the year that Graham started teaching at Harvard (she previously taught at the Iowa Writers’ Workshop), Sacks and Graham were married. For Foetry supporters, the connection was too close for comfort, and Cordle called a foul.

Ramke, who claims that he personally read “at least a significant sample” of every manuscript submitted to the CPS—there were no outside readers who screened the entries—bristles at the charges of unfairness. “I did not then nor do I now know what Graham and Sacks’s personal relationship was at that time,” he says. “It was and is none of my business.” Whatever their relationship a year before they were married, however, it was close enough for Graham to alert Ramke to a possible conflict of interest. “I knew his work somewhat, had never met him,” Ramke says of Sacks. “When I sent the book to Jorie, and she said it was a great book, but she and Sacks were going to be colleagues at Harvard, I still wanted Georgia to publish the book. So Jorie selected another from the dozen [finalists].” In 2000, the University of Georgia Press published the two winning books—Lee Upton’s Civilian Histories and Sacks’s O Wheel.

Ramke stands by his decision to publish O Wheel. “I would still definitely choose [the book] for the series,” he says. “I know I did consider the others, and found his more interesting and complex and powerful at the time. Therefore, I considered it the right choice to make, and made it.”

Despite Ramke’s belief in his job, which, he says, was “simply to find the most interesting books [that] would advance the position of poetry and perhaps widen its readership,” he found other facets of his professional life affected by the persistent allegations that were leveled at him because of O Wheel. Along with the charges that he administered the CPS unfairly—to which he responds, “I considered myself, and was called, an editor, not a contest administrator”—Ramke’s own publishing history was called into question as well.

Four of Ramke’s eight books of poetry were published by the University of Iowa Press. Two of the four—Airs, Waters, Places (2001) and Matter (2004)—were released in the Kuhl House Poets series, which is coedited by Jorie Graham. “When, on top of that, I began receiving two or three e-mails a week accusing me of being published at Iowa only because I let Jorie Graham publish her friends at Georgia, and accusing me of making money off of fraudulent practices, and then having to try to read the new manuscripts for the Georgia series without allowing that pressure to influence which manuscripts I selected, it all began to seem a bit much.”

Ramke’s other job, as editor of the Denver Quarterly, a literary magazine published by the University of Denver, was also threatened. “I was afraid the controversy from the Georgia series might end up affecting this, my actual paying job,” he says. “The University of Denver is my primary employer, and its administration was becoming concerned with the publicity being generated around Foetry, especially when it moved from print into the airwaves.”

Ramke was finally convinced that he should retire as editor of the CPS when he heard that the director of the National Endowment for the Arts (NEA), Dana Gioia, supported Foetry’s goal of exposing fraudulent contests. “At that point, it seemed, my continued involvement was potentially detrimental to the project of getting the books out into the world, and getting word about the books out,” Ramke says. “It was clear, as long as I was there, the NEA would never be a funding source for the Georgia series. My decision, first to stay, then finally to leave, was always about what would best support the books I had already helped to select, and those that might come in the future. When the balance seemed to shift with the NEA issue, then I decided to go. But it was only the last in a long series of pressures.”

After Ramke announced his retirement, the University of Georgia ended the series, which was created by Paul Zimmer in 1980. The press is currently exploring ideas for a new poetry series.

Ramke says he is saddened to think that the books that were published in the CPS—“some beautiful, necessary, powerful books of poems”—have been somehow tainted by the controversy, but he doesn’t regret many of the decisions he made as the series’ editor. “My primary ethical consideration, which always and forever will trump any other consideration, is the literary-cultural merit of any work I have a hand in publishing,” he says. “Certainly, I can be faulted for a certain casualness in process over the years. I never considered the process to be a contest, but rather a method for casting a wide net, for inviting lots of different kinds of poetry to be considered for publication.”

Many poets who sent in their twenty dollars for entry fees, however, had different expectations for the process whereby winners were chosen. There is now widespread support for contest guidelines to prohibit a judge from picking a student or anyone to whom she has a close personal relationship—a guideline that did not figure into the CPS selections. And the Council of Literary Magazines and Presses (CLMP) recently sent its members a suggested code of ethics for literary publishers that sponsor contests.

But not everyone agrees on the details of how a contest, or series, should be run. “In the end, I believed then that what mattered was the literary quality of the work we published, not the process by which we found that work,” Ramke says. “Clearly, the current to-do about contests means that all rules must be in writing and adhered to legalistically. But I do not believe that is either the only, or even the best, way to assure ‘fairness’ in the selection of literary merit. I think trust among the people involved is the best way, and since I have lost that trust, I will no longer be part of the process.”

It remains to be seen whether Ramke’s retirement as editor of the CPS will have any effect on how judges choose winners and administrators run the hundreds of contests now being offered to writers. What’s clear is that one of the oldest and most prestigious poetry book series has ended—a source for both emerging and established poets has dried up. “One of the unfortunate elements to the whole business has been that poetry has nothing to do with any of the discussion,” Ramke says. “The general public is merely reassured that poetry in our time is a pointless, petty little anachronism, with no relevance to anyone but a tiny group of privileged insiders.”

The public’s opinion of poetry may not have sunk that low, but the CPS controversy has once again proven that, as Ramke says, “it’s scandal that attracts general attention.”