This spring, writer Susan Tacent co-taught a virtual workshop called The Art and Science of Migration to twelve writers interested in animal migratory patterns. By the last of the workshop’s five weekly sessions, Tacent says, students saw migration everywhere. They began thinking of poetry “as a migratory journey that isn’t complete until the reader reads the poem.” They talked about how, when writing prose, “you don’t know where you’re going, but you’re committing to getting there.” 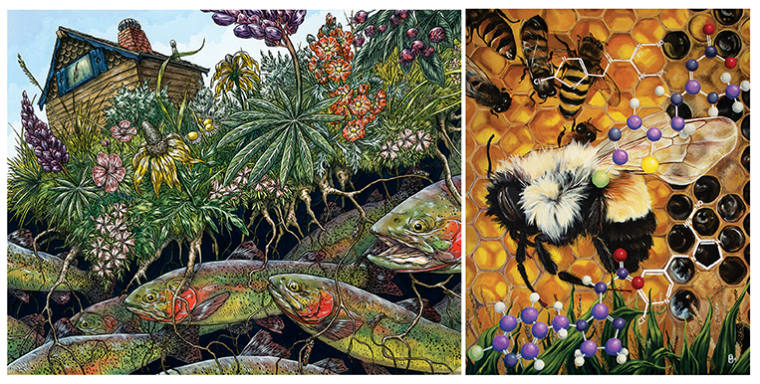 The workshop was offered through Creature Conserve, a nonprofit founded in 2015 by Dr. Lucy Spelman, a zoological medicine specialist. The growing organization is dedicated to bringing together artists, creative writers, and scientists “to foster informed and sustained support for animal conservation.” Specifically, Creature Conserve seeks to address a failure of communication around conservation, encouraging discussion and collaboration between the people who study animals and the people who depict them in writing and art.

Spelman has been thinking about how to address this disconnect since serving as a veterinary medical officer and then  director of the Smithsonian’s National Zoo in Washington, D.C., from 1995 to 2004. There she realized that the research and range of animal behavior her colleagues observed “wasn’t something that the average visitor got to see.” As she worked closely with animals, she found herself asking, “How do we bring more people behind the scenes? How do we help them feel inspired and feel connected?”

She continued asking this question while serving as the field manager for the Mountain Gorilla Veterinary Project/Gorilla Doctors organization in Rwanda and then while teaching biology and conservation to nonmajors at Brown University and art students at the Rhode Island School of Design (RISD). It was in this role as a teacher, listening to her students “absorb, interpret, and critique” scientific information, that she realized how important thoughtful communication is to conservation. “Scientists do a download,” she says, and share information in a more clinical style, but they “don’t think as much about narrative or interest for readers.” Her students, on the other hand, were “making the material interesting to each other.”

So in 2014, Spelman began work with her students on Creature Conserve, a website where they could display the visual art they created in her class. (“Conserve,” she says, sounds more like a personal action, while “conservation feels like something someone else is doing.”) Then, with support from the International Fund for Animal Welfare, she put together a call for art on the wildlife trade; the resulting exhibition premiered at RISD in 2016 and traveled to Ohio and Wyoming. Creature Conserve grew from there. From 2016 to 2020 the nonprofit supported more than sixty artists, creative writers, and scientists with scholarships ranging from $50 to $3,500, enabling community engagement, field studies, research, and other endeavors related to the intersection of storytelling and science. A second exhibit, Urban Wildlife: Learning to Co+Exist, launched at the National Museum of Wildlife Art in Jackson, Wyoming, in October 2020. Creature Conserve hosted or cohosted eight workshops for writers and artists in 2020 and several already in 2021. In addition, the organization offers regular artist talks, scientist Q&As, a community space on the online platform Slack, and a growing mentorship program.

Tacent’s co-teacher, poet Christopher Kondrich, says that the goal for their workshop on migration was to show participants how “science could inform new ways of writing (and new ways of thinking about their writing) about animal migration, habitat loss, climate change, and extinction.” Following Creature Conserve’s standard workshop model, each of the five classes featured a presentation by a scientist, meant to help participants better understand the science behind the topic and, in turn, improve the science in their poetry or prose. In this case the participating scientist was Spelman, who taught students about the energetic costs of migration, the means by which animals navigate, and the plasticity they need in order to adapt migration behaviors to changing environmental conditions.

This workshop format—a scientist presenting scientific information and an artist or writer guiding participants through a creative interpretation—is at the heart of Creature Conserve’s unique mission, and it is something that Heather McMordie, an artist currently working on a project related to salt marsh ecosystems, especially appreciates. “One of the goals of Creature Conserve is to help artists really connect with the science and have the opportunity to research,” says McMordie, who participated in the migration class. For too long, she says, “arts and sciences and so many different professional fields have been siloed, and it’s time to work together and collaborate in order to make real change.”

Spelman puts this same idea another way: “Celebrate, study, protect. If we don’t celebrate the creature, we won’t be motivated to protect it. But if we don’t understand it, we’re not going to protect it wisely.”

How does this emphasis on celebrating and studying animals lead to protecting them? Tacent illustrates the answer with, of course, a story: Peter Green, a Providence-based photographer in Creature Conserve’s network, found a pigeon trapped behind a net. Unable to move the net alone, he called his building’s superintendent, and when the superintendent refused to help, Green sent him a photograph of the female pigeon on one side of the net and a male pigeon on the other side looking in. “When the super saw the photograph, he rescued the pigeon,” says Tacent. “So that’s what Creature Conserve’s writing and art workshops are trying to do: to get that picture out to as many readers or viewers as possible.”

Emma Hine is the author of the poetry collection Stay Safe, which received the Kathryn A. Morton Prize and was published in January 2021 by Sarabande Books.

Of the Diaspora, In the Spotlight
by Jennifer Wilson | News and Trends 6.16.21

A series of books, edited by Erica Vital-Lazare and published by McSweeney’s, shines a light on Black literature that was previously overlooked or underappreciated.

The Pop-Up Literary Agency
by Jessica Kashiwabara | News and Trends 6.16.21

A pop-up literary agency at the University of Arizona allows students to gain practical, hands-on experience in the publishing world by connecting children’s picture book authors with established agents.