In our Craft Capsules series, authors reveal the personal and particular ways they approach the art of writing. This is no. 128. 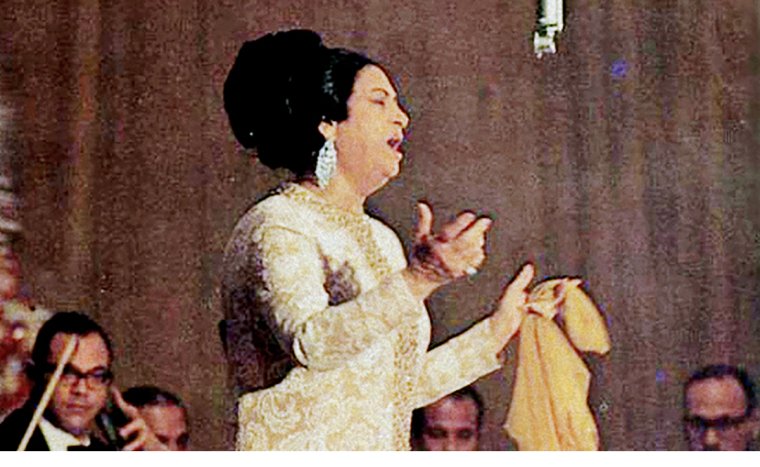 While sitting at my desk in Texas trying to write about Egypt, I listened to a lot of Umm Kulthum, Fairuz, Abdel Halim Hafez, and other old-school Arabic music. Short of boarding a plane and traveling seven thousand miles, or accessing a time machine that could take me back sixty years, this was one of the most effective ways I found to put me into the right mindset to write about Egypt in the 1950s. I would close my eyes, fingers poised over my keyboard, and feel like I was in another time and place.

Perhaps it was the quavering vocal stylings particular to Egyptian singers, the reverberatory lamentations of the flute-like oud, or the beat of the darbuka percussing in the background. Listening, I was transported back to my cousins’ late-night weddings at hotels in Cairo, where bands played and singers sang and belly dancers danced. I returned to the sense of wonder I felt at these parties, recognizing that this was my cultural heritage.

Listening to Egyptian music from the 1950s, I would guess that we are a somber people. Granted, if I advanced a few decades and put on a more contemporary Arabic soundtrack while I wrote, I’d find plenty of spirited pop or techno music, but the solemn artists of the mid-twentieth century captured a mood that better aligned with the emotional landscape of my book. These artists were also chronologically synchronous with the time period I wanted to capture—Egypt at the dawn of the postcolonial period. Abdel Halim Hafez, in particular, is known as an artistic emblem of this revolutionary era who gave voice to Egyptian patriotism and independence at a time when Egypt was wresting itself from British control. In fact, his patriotic songs were revived as part of the battle cry of the populace during the 2011 Egyptian revolution, sixty years after the revolution that originally gave birth to his art.

Umm Kulthum’s music is also considered a national treasure. Her famous song “Wallah Zaman Ya Selahy” was adopted as Egypt’s national anthem from 1960 to 1979 and captures the metaphorical energy of a country battling for its independence. I listened to this song over and over while writing scenes at the beginning of the book in which Cairo is burning in protest of British rule. And then there is Abdel Halim’s epic, airy, orchestral song “Ahwak,” which helped me access the nostalgic, homesick pining experienced by my character Halah—a young Egyptian woman who runs away from home and country—when she first settles in America. There are long passages in the song where the strings and drums almost seem to compete but ultimately collide into an energetic marriage—like the forces battling within Halah.

I credit my father with giving me access to this music, long before platforms like Spotify. He was the DJ of my youth, filling our home with an eclectic, rotating soundtrack of Arabic music from his younger days, as well as classical and opera, a lot of Beatles, and a selection of American folk music. Later he started building a large digital collection of Arabic music, expanding my exposure from the few CDs he had when I was young. When I still actively kept an iTunes music library, a large proportion of it was dedicated to Arabic artists shared with me by my father—music to accompany my writing. Though I listened to these songs over and over again, their lyrics never penetrated my consciousness the way that Beatles’ songs did (play a Beatles album, and you’ll likely be subjected to me singing along with every word of every song). I have a decent facility with slow-paced conversational Egyptian Arabic, but put on an Arabic television show, news broadcast, or album, and the language will wash over me, more atmosphere than anything. Normally I can’t write to music that has lyrics without getting distracted by the language, but for better or worse, Arabic music is obscure enough to my ears not to be distracting.

Rhythm is an essential element of both music and literature. There is a unique kind of alchemy that can be unleashed when listening to the right kind of music while writing. When the chemistry works, and the writing flows in tandem with music that activates the brain, it is a special kind of magic.

END_OF_DOCUMENT_TOKEN_TO_BE_REPLACED

The author of Country of Origin muses on the transporting power of photographs.

Where I Found My Writing Community
by Dalia Azim | Craft Capsules 3.28.22

The author of Country of Origin reflects on finding her people in Austin, Texas.