If reading is another form of listening, truly attuning to an unfamiliar voice can be a means of transformation. Since 1980 the nonprofit publisher Milkweed Editions has sought to engender just such change in readers, with the stated purpose of being “a site of metamorphosis in the literary ecosystem.” Milkweed’s titles—including Robin Wall Kimmerer’s best-selling literary phenomenon, Braiding Sweetgrass: Indigenous Wisdom, Scientific Knowledge, and the Teachings of Plants, and Aimee Nezhukumatathil’s acclaimed illustrated essay collection World of Wonders—showcase a diversity of genres and styles, many of them radical and experimental. 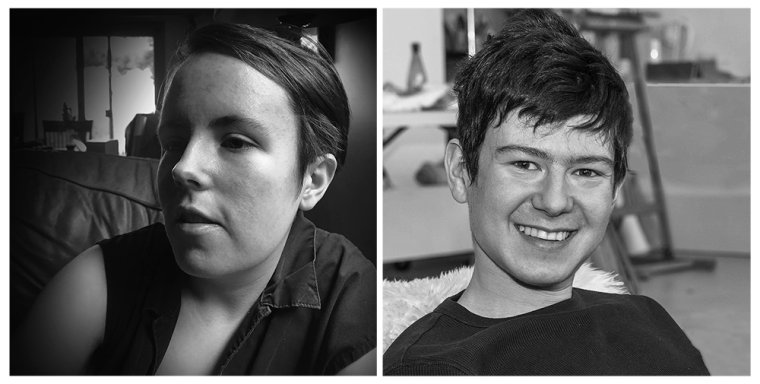 Now, with its new Multiverse series, Milkweed pushes even further into territory largely unexplored by traditional corporate publishers: neurodivergence. The series is devoted to publishing books that explore “different ways of languaging,” all written by neurodivergent authors. The series’ first book, The Kissing of Kissing, a collection by nonspeaking autistic poet Hannah Emerson, came out in March. It will be followed in November by nonspeaking autistic poet Adam Wolfond’s The Wanting Way, and, later, Aster of Ceremonies, by disabled artist and stutterer JJJJJerome Ellis.

Chris Martin, a neurodivergent poet and editor-at-large for Multiverse, developed the idea for the series in his role as a teacher-writer with Unrestricted Interest (UI), an organization he cofounded seven years ago to help neurodivergent learners, particularly autistic students, express themselves through writing. Martin, whose book about his pioneering educational work, May Tomorrow Be Awake: On Poetry, Autism, and Our Neurodiverse Future (HarperOne), comes out in August, says UI expanded his capabilities as a listener and better illuminated “the reciprocity between poetry and neurodivergence.”

Martin shared his concept for Multiverse with his friend and mentor Daniel Slager, Milkweed’s publisher. It took only one conversation for Slager to decide that Milkweed would be an ideal home for the series. Milkweed has taken a careful and robust approach in bringing the Multiverse books to the marketplace, working to hire neurodivergent consultants for the series.

For promoting Hannah Emerson’s The Kissing of Kissing, a team was assembled that included Martin, Emerson and her family, and publicity consultant Jenara Nerenberg, the author of Divergent Mind: Thriving in a World That Wasn’t Designed for You (HarperOne, 2020) and founder of Divergent Literary, a full-service agency devoted to representing neurodivergent authors and allies. Claire Laine, formerly Milkweed’s senior publicist, says that with Nerenberg’s assistance, she reached out to “advocates, influential voices, and publications that would thoughtfully respond to Emerson’s craft. … This range of outlets was an important part of reaching the communities close to Hannah’s heart and mind, as well as introducing her work to new readers and audiences.”

The response in the press to Emerson’s innovative work—in which the word yes serves as an ecstatic backbone, repeated numerous times throughout many poems—was, for Martin, mind-blowing. “To have poems from The Kissing of Kissing appear in Poetry, and to have the book reviewed in the New York Times and the Nation feels like a fundamental and ground-altering shift,” he says. “On the other hand I genuinely think this is an earthquake of a book.”

For the book’s launch, a chorus of voices were brought together over Zoom. The participants, all of whom were already engaged with Emerson’s work, and included kindred neurodivergent poets, friends, and editors, each read a poem from Emerson’s collection, then responded with a creative piece of their own: a poem, or song, or sound performance. The chorus manifested Emerson’s hopes for the collection: that her poems would “kiss” others, then encourage or provoke further creative kissing. In an online event at the Vermont Studio Center, Martin facilitated as Emerson answered questions from the audience, typing out her responses, with her mother reading the words aloud as she went. Once Emerson completed her answer (typically with a “yes, yes, yes”), Martin reread the entirety of the response back for the audience. To watch the recordings of these experiences is to witness not only the artist’s active mind at work in real time, but also the multitude of interlocutors engaged to help bring her thoughts into the world of spoken language.

To Martin, collaboration is at the heart of the Multiverse series. A community is growing around the books, not just between the authors—who, by engaging with one another’s work, are becoming friends—but among the editorial team supporting them as well. “I knew the series would need far more than my limited viewpoint, and I also genuinely wanted company and a diffuse ecosystem of curious, accountable decision-making,” says Martin. “It’s more work, but it’s the kind of work that’s endlessly generative. And healing. As scholar and author Ashon T. Crawley writes, by way of Foucault, we endeavor to practice ‘friendship as a way of life.’”

For Adam Wolfond’s forthcoming The Wanting Way, the editorial process has been “a collective adventure,” says Martin, who explains that Wolfond experiences line breaks as windings, “like those made by a river.” During the author’s composition process, he types, and his computer-generated voice speaks the verse without punctuation or break. Later, Martin slowly reads back the work while Wolfond uses a sound or stick to indicate where he wants the “winds.” They also play with movement, having Wolfond walk over a large sheet of paper with paint on his feet, stomping to signify a wind. For the collection, Wolfond and Martin commissioned other writers, artists, and editors, including fellow Multiverse poet JJJJJerome Ellis, to make variant windings, or rewindings, of Wolfond’s words. One poem appears in three different forms in the book. This process inspired Ellis to do something similar for his own forthcoming book, which will bring an ensemble of writers and thinkers onto the page.

When asked about this editorial approach, Martin returns to the idea of listening. He has found that, in his experience, many nonspeaking writers have, by necessity and resourcefulness, “forged gloriously unique language practices.”

He continues: “As a first reader, my role is explicitly not to correct anything. My role is to listen and study and glean how they wield patterns. Once I understand [the writer’s] particular modes of languaging, then my role changes from listener to steward. I am simply there to make sure that the process by which their words find readers is consensual, joyful, and minimally limited by any preconceptions regarding what a book is or how it should move.”

And so the series title is apt, as Multiverse illustrates the multitudes of ways in which an active, creative mind operates, which can in turn widen and expand how a reader engages with literature and the world—if, that is, they’re listening.

Brian Gresko is a writer based in Brooklyn, New York, where he co-runs Pete’s Reading Series.

Building Solidarity Through Poetry
by Swati Khurana | News and Trends 4.13.22

The Matwaala collective was launched in 2015 to create visibility for South Asian poets. Today, Matwaala programs such as the Poets of Color festival foster solidarity between different identity groups through literature.

The Ford Foundation and the Andrew W. Mellon Foundation have launched a fellowship program that honors disabled writers and artists in a variety of disciplines with grants of $50,000 each.