In April 2021 the South Asian diaspora poets collective Matwaala hosted a virtual poetry festival inaugurating its Poets of Color series. The event featured five Black poets—Dorothy Randall Gray, Cynthia Manick, Marsha M. Nelson, Anastasia Tomkin, and Loretta Diane Walker. Nelson’s poetry spoke to the moment, to a rapt audience: “Black men and women need to breathe / in a claustrophobic society / to relieve the anxiety / that George Floyd felt / eyeing the backseat / of a small squad car….” While Matwaala was originally founded to bring greater visibility to South Asian poetry, the series reflects the way Matwaala itself has become a growing and expansive community, mindfully working to create solidarity across identity groups through literature. 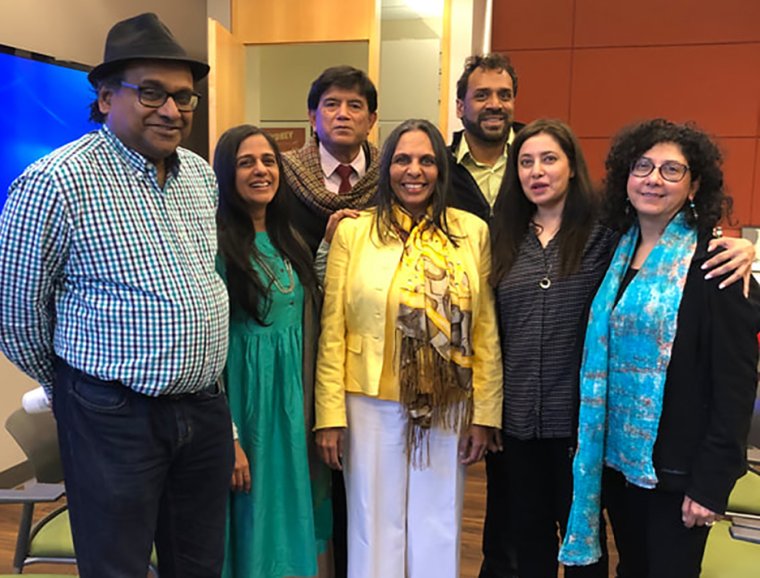 In 2015 the Matwaala collective was launched by Usha Akella and Pramila Venkateswaran to increase the visibility of South Asian diasporic poetry. Both of its founders bring rich experience in activism to the endeavor. The former creative ambassador for the city of Austin, Akella previously founded the Poetry Caravan, an organization with branches in Austin and New York State that brings poetry readings to women’s shelters, senior homes, and hospitals. The author of multiple books of poetry, Akella faced an online harassment campaign from men’s rights activists in India for her April 2021 book, I Will Not Bear You Sons, leading its publisher, Spinifex Press, to issue a statement in support of the poet’s feminist indictment of Brahmanic patriarchy. Pramila Venkateswaran, former poet laureate of Suffolk County, in New York’s Long Island, is the author of eight books, including the forthcoming We Are Not a Museum, which is an homage to the Jewish community of Kochi, India, and will be out in May from Finishing Line Press.

“Matwaala” was a name suggested to Akella and Venkateswaran by scholar Amritjit Singh and translates loosely as a word describing someone who is intoxicated—perhaps even drunk. Yet the word “is used more often in a transferred sense,” according to Akella, “for someone who is a free spirit, denoting creative adventure and freedom, artistic assertiveness, and nonconformity.” For the past several years, Matwaala’s annual poetry festivals, originally organized in Texas but more recently hosted by institutions such as Nassau Community College, New York University, and the Asian American Writers’ Workshop, have featured poets such as Zilka Joseph, Sophia Naz, Saleem Peeradina, Vijay Seshadri, Ravi Shankar, and the late Meena Alexander. Other undertakings include the publication of MAPS: Matwaala Anthology of Poetry From South Asia in 2019 and the launch of Sync Poetry, a youth platform hosted by Sara Garg and Diya Kanduri. In early 2020, Matwaala made a foray into art installation with a project called the Poetry Wall, which contained poems by twenty-four poets from the South Asian diaspora for the Smithsonian’s “Beyond Bollywood” traveling exhibition project at the Irving Archives and Museum in Dallas. But shortly after the exhibition opened, the COVID-19 pandemic halted any museum programming. As the organization thought about its future public programs, Akella says, “The turbulent racial events in 2020 motivated me personally to engage with African American literature and film.” With Venkateswaran, Matwaala pivoted its focus to programming that creates solidarity with Black, Latinx, and Indigenous poets.

Venkateswaran says that engaging with African American and Native American poets was an invitation to “think more critically of the privileging of voices within the South Asian community,” specifically through caste-based oppression. In a statement of solidarity given at the African American poets reading, she spoke of the two-century-old “solidarity between South Asians and African Americans.” Remarking upon Martin Luther King Jr.’s visit to India in 1959, Venkateswaran highlighted King’s insight that “the inhumanity of white people against Black people was similar to the caste system where upper-caste Brahmins treated [the Dalits] as pariahs.” In a gesture of building bridges through poetry communities, Venkateswaran translated Tamil Dalit poet Sukirtharani into English and has prepared a dossier on Native American poets for the Dalit literary magazine Anangu.

The transition to virtual poetry festivals over the past two years has allowed Matwaala to attract a larger national and international audience. While the organization may resume some in-person events, it plans to also continue virtual programs to maintain the audience it has built. With these solidarity programs, Matwaala saw a demographic shift in its audience. Previously Matwaala’s audience was “mostly South Asian and white,” according to Venkateswaran, whereas its Native American poetry event engaged many in the Shinnecock Reservation in eastern Long Island as well as the poets’ friends and colleagues in Native American communities across the country. At the conclusion of each program, Akella and Venkateswaran hold discussions with each poet to engage in questions of craft and the thematic threads of the poems. These conversations—and the dialogues the readings build more broadly—reflect Matwaala’s directors’ fundamental belief that we can only flourish when we think and act collectively. “Very long ago,” Akella says, “I understood that for me personally, success did not mean forging ahead alone; it always had a component of community and activism.”

Swati Khurana is a New York City–based writer, artist, and tarot reader, and the flash fiction editor at the Margins, a publication of the Asian American Writers’ Workshop. Her writing has been featured in the New York Times and Guernica, and she has received fellowships from the New York Foundation for the Arts, the Center for Fiction, and Kundiman.

Jafreen Uddin, the new executive director of the Asian American Writers’ Workshop, discusses her vision for the organization, which has been the de facto home for Asian American writers for nearly thirty years.

Craft Capsule: Why You Need an Authenticity Editor
by Anjali Enjeti | Craft Capsules 7.26.21

The author of Southbound and The Parted Earth writes about how authenticity editors have helped enrich her work in all genres.