This January, Jafreen Uddin assumed leadership of the Asian American Writers’ Workshop (AAWW) as its new executive director. Located in New York City, the twenty-nine-year-old organization has been a de facto home for Asian American writers and literature, fostering community and providing space for essential dialogues through its events, classes, and fellowships, as well as its online literary magazine, the Margins. Uddin succeeds poet Ken Chen, who led the AAWW for eleven years, and becomes the seventh person and first woman to head the nonprofit. She brings with her a decade of experience, including her most recent work as PEN America’s deputy director of development for special events. As she stepped into her new role, Uddin shared her thoughts on the significance of Asian American literature—for herself and for all readers—and the importance of supporting storytellers and stories from the Asian diaspora. 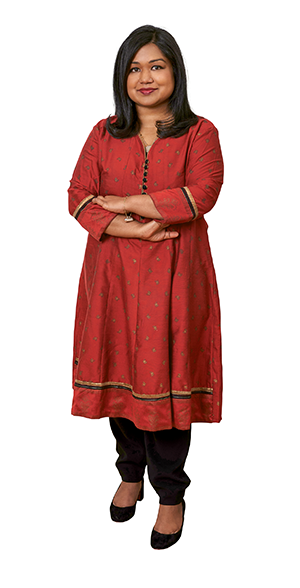 What drew you to this position at AAWW?
The workshop is an organization I’ve long admired. As a supporter, community collaborator, and audience member, I witnessed the workshop become one of the most dynamic alternative literary and social justice spaces here in New York City. Back when I was managing public events at the Brennan Center for Justice, I often looked to the workshop as a partner on book talks and special events.

What is your vision for building on AAWW’s work thus far, and how does your identity shape that vision?
As a Muslim American woman, I know all too well what it means to be a member of a community that is misunderstood and often talked about more than talked to. It is why I am honored to have the chance to lead an organization that nurtures our storytellers. By championing our community’s writers and artists, we are championing the community at large.

What are the greatest challenges Asian American writers face, and how can AAWW address them?
The workshop is often described as a real sanctuary for our writers and artists, and continuing that tradition is a priority of mine. A challenge facing not just Asian American writers but emerging writers more broadly is learning the ins and outs of the publishing industry. I would love to develop programs and events that can cater to this decidedly less sexy but critically important need for our writers.

In our current sociopolitical moment, when intolerance towards immigrants and minority groups, including Muslim Americans, is driven in part by our current administration’s rhetoric and policies, what role might AAWW play?
If anything, this current sociopolitical moment calls for the amplification of Asian American voices. The workshop plays a powerful role in allowing members of otherwise underrepresented communities to make their voices heard while also providing them that sanctuary where they are understood and honored.

What is your take on how the publishing industry approaches diverse stories and voices? And what can AAWW’s role be in addressing these issues?
Numbers don’t lie: There is a clear problem of representation at all ranks in the publishing world. The industry has come a long way with respect to telling stories by and for all communities, but there is still so much more to be done. And not just when it comes to embracing stories written by authors from all walks of life, but also making sure the industry gatekeepers, the people deciding which stories are told, are appropriately diverse. There is a uniquely critical role for the workshop in this ongoing effort—from providing our community of writers the tools and resources they need to navigate the publishing industry to creating necessary platforms [for their work], we are in a position to bridge that gap between the publishing industry and the storytellers who aren’t yet being heard.

How do you strike a balance between AAWW’s dual objectives of creating a space for and supporting Asian American writers and growing the audience of Asian American literature beyond those who identify as Asian American?
I don’t think one needs to be at the expense of the other. By nurturing our own community of writers and artists and providing a space for their stories and imaginations, we are simultaneously preparing those storytellers to share their work on larger more expansive stages. As I think about ways to expand the workshop’s reach on a national and even global level, the need to connect with new audiences is a critical and necessary piece of that expansion.

Kavita Das writes about culture, race, gender, and their intersections. Her first book, Poignant Song: The Life and Music of Lakshmi Shankar, was published in June 2019 (HarperCollins India).

AAWW Continues the Conversation
by Arvin Temkar | News and Trends 12.15.15

The Asian American Writers Workshop rings in its twenty-fifth year at the forefront of the movement to diversify the publishing industry, and to provide advocacy, education, opportunity, and visibility to Asian American poets and writers.