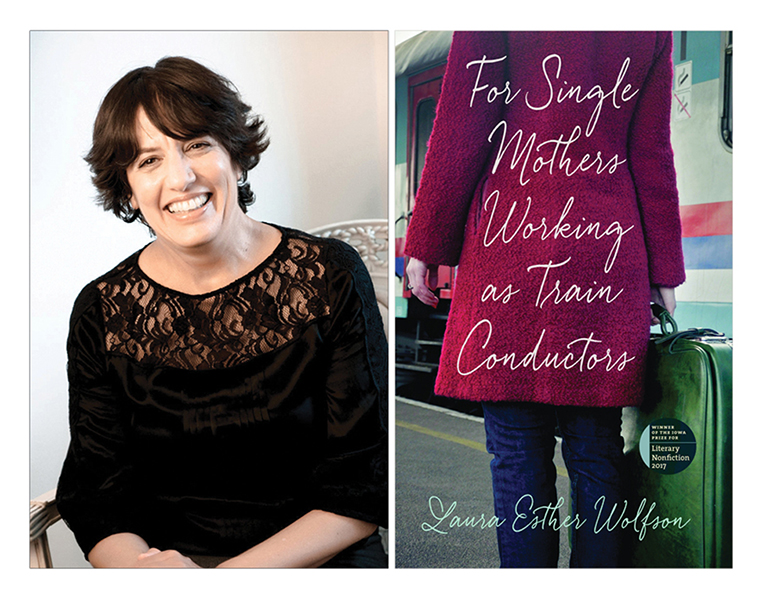 Laura Esther Wolfson, author of For Single Mothers Working as Train Conductors, published in June by University of Iowa Press.

I wore my flannel nightgown with the tiny lavender flowers. Aleksandr had on his beige briefs with the blue pinstripe, he said. I filled in the rest—ruddy hair, hazel eyes, slim form. He murmured to me over thousands of kilometers of telephone wire from his home, far to the south, in Tbilisi. His voice was warm.

In 1988, no one called it phone sex. We had discovered it on our own. We were making the best of our separation.

I was sprawled on a bed in the October Revolution Hotel, gripping the receiver. Outside, a massive ship the color of lead stood at anchor in the Neva River. An enormous lamp on deck sent a beam through my window, providing practically the only illumination in all of late-night Leningrad.

“And one day, when we make love,” he was saying, “it will be different from the other times, because we will make a baby.” His voice turned gravelly with desire. “We’ll create life. And you will become—a mother.” A detailed how-to followed.

I was in the USSR working on a cultural exchange project  and polishing my college Russian. I was twenty-two. Aleksandr was twenty-five, a rising star at a research institute specializing in honeybees. He inseminated the queens, artificially, using his own patented device. The bees adored him; he rarely got stung.

He had never been west of Montenegro. Inviting him to meet the folks was an undertaking. After I returned home to upstate New York, we waited eight months for the Soviet government to grant him an exit visa so he could come out for a visit. In those days, before email, cell phones, and Skype, I spent hours upon hours pressing redial, waiting for one of the four international phone lines serving his hometown to open up so that we could bellow to each other, at two dollars a minute, through a staticky roar that sounded like a volcano erupting over and over.

Years would pass before we became husband and wife. During those years of waiting, he talked frequently about the babies we would make. Before conceiving, he said, we must develop healthy habits, ingest the right minerals, avoid the wrong ones, exercise. His health-consciousness was impressive, considering where he came from: a part of the world where liquor flows so freely that it takes real effort to become known as a serious drinker, a place where the mention of lung cancer evokes a shrug and a smoke ring. After all, what is a demise at home, at your own pace, a death you choose yourself, compared to the midnight knock at the door, disappearance, interrogation, the gulag with its attendant frostbite, starvation, execution, all still part of recent memory? With that as the alternative, dying at home is a pleasure, a luxury, an assertion of free will.

Aleksandr was a nonsmoker; that alone made him remarkable in his world. He drank in moderation. By putting fishing line to novel use, he had independently discovered dental floss, a commodity unheard of in the Soviet Union.

And so, before we could become parents, we must be “ready.” Whatever that meant. But that was fine. My twenties and thirties stretched ahead. So far ahead that I could not see where they might lead. I listened to Aleksandr’s voice and I followed.

Three years after that telephone conversation, three years marked by extended visits and protracted separations, we were married near his parents’ home in Georgia. The next morning, the bedroom door flew open. We threw on some clothes.

In bustled Aleksandr’s chubby maiden aunt, Tamara, who lived in the apartment downstairs, pulling a little girl by the hand. The child was her namesake, and she went by the nickname Tamrico. She was one of the cousins, a ringleted five-year-old who often wore an enormous pink bow. We called her Tamrico the Terrible. During the wedding photos the day before, she had smashed her tiny fist through the lens of the only camera the family owned.

Behind the two Tamaras, other family members hovered. “There’s something little Tamrico wants to know,” said Tamara the Elder, laughing. We rubbed our eyes and blinked.

“Come on,” she said to the little girl. “What did you just say downstairs? Remember? Say it again.”

Tamrico took a breath. She recited: “Now that you’re married, when will you have a baby?”

A few years later, when Aleksandr and I were living in Philadelphia, his mother Nadezhda flew over for a visit. She set her suitcase down by the door, let her shearling coat slip off her shoulders onto the nearest chair, and set out on a circuit of the apartment.

“I’ve found the perfect place for the crib,” she said when she was done. The look on her exotic, youthful features was dreamy, yet practical.

“By your side of the bed,” she said to me. “So when the baby cries at night, you’ll be right there. And it’s far from the window, away from drafts.”

Similar comments followed in a steady stream. After a few days, Aleksandr and I shut ourselves in the bedroom to confer.

“We’ll say it’s my fault we don’t have a child yet,” he declared suddenly. “You want a baby, but I’m not ready.”

He had been born precisely ten months after his parents’ wedding day, so we were way overdue. I appreciated his willingness to take the heat.

I cannot pinpoint the moment when this story became the truth.