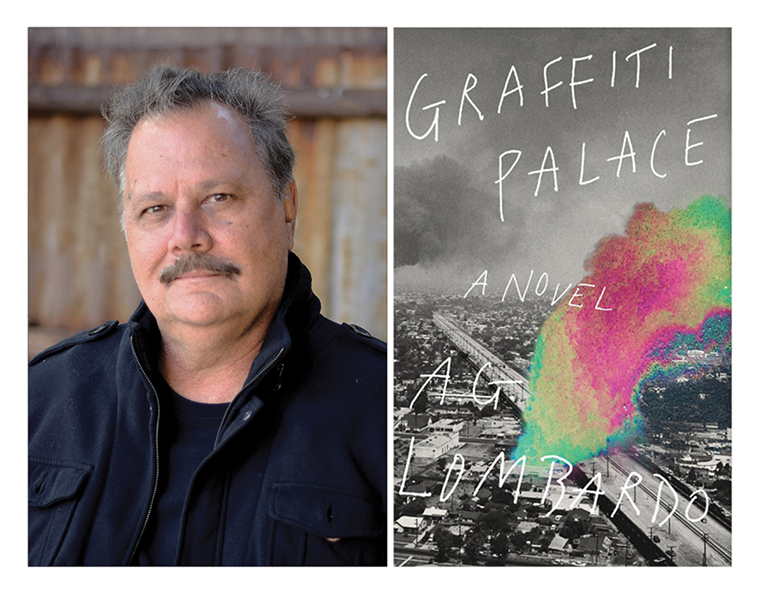 A. G. Lombardo, author of Graffiti Palace, published in March by MCD Books.

The sky is burning. A vast plain of scintillation. But it is only sun­ set, another rehearsal for some future promised holocaust. The dying light silhouettes towers of iron in rust’s glow: great stacks, ziggurats of steel cubes, shipping containers wedged and balanced on pier’s edge above the crimson diamonding of the Pacific.

Karmann Ghia turns away from the copper light drowning into the ocean, each lapping wave a sputtering flame that spar­kles, dies. The world is a funeral pyre without him—when will he return? She walks along this upper Matson observation deck, her fingertips caressing, tracing a rail of rebar Monk welded last year. White plastic chairs and a table shift in sunset shadows. Below, some of the old cargo containers still advertise faded logos glinting from networks of rust, salt, and desiccated barnacles: SEA-LAND, PACIFIC,  MATSON, WESTCON, YANG MING, RAM­JAC, EVERGREEN, PAN-IC (INTERNATIONAL CARRIERS). A city of iron cubicles latticed along the harbor, piled like a giant’s stairway in gravity-suspended steps rising toward the burnished sunset, or skewed in angles and intersecting layers; some pitched, half toppled by long-ago-extracted cranes and ship’s booms. The steel hulks loom like a metallic warren on the precipice of Slip Thirteen , an abandoned cargo depot jutting out into the smoggy dusk of Los Angeles Harbor. The shuttered facade of the Crescent Ware­ house Company along the East Channel obscures most of the old containers; beyond the protection of these warehouse buildings and the toxic, oiled patina of the channel waters is the city: only scattered buildings and glimpses of knotted freeways shift be­ neath the haze.

She descends the iron steps welded diagonally down the rusted side of the container, gripping the handrail of old, thin pipeline that Monk looped and welded around the crude  stair­ case. Dim corridors snake through the  labyrinth of the steel boxes, created by confluences of gaps amid the containers, or ship­ping doors ajar, or crawl spaces through torched holes or peeling iron sides. There are ropes, ladders, stacked crates, purloined boat ramps, illegally welded rebar rungs and handholds, ingress and egress, but these signs of human habitation have been care­ fully hidden from the city to the northwest.

Karmann disappears through an open cargo door, down a lad­der through a blowtorched portal, into the darkened nexus of the iron chambers. Electric bulbs strung on wires hanging from freight hooks and eyelets wash her black skin in dark rainbows of blue, yellow, green; she’s changed some of these lights with col­ored bulbs, hoping for a festive aura here, but lately it seems to her the effect is garish, carnival; maybe that’s just her soul of late.

In the main rooms now, a series of chambers extended by gap­ ing cargo doors, containers torn open and welded together at dis­ concerting angles. Windows torched through iron reveal views into other containers or sometimes the smoggy blue continuum of the channel waters and sky. An old sofa, tables, dusky lamps. Black-and-white shadows flicker from the Philco TV—Elizabeth Montgomery twitching her nose in Bewitched—hung with baling wire from a ceiling hook high in the corner, silent, volume down, its jangled antennas looped with wire snaking up corrugated iron walls for patchy reception. Some of Monk’s friends mill about, drinking Brew 102 or Pabst or some of Karmann’s Electric Purple lemonade from a glass bowl on the dining table, smoking cigarettes—although Slim-Bone over by the old fish-crate shelves splayed with crumbling paperbacks has just lit up a joint—the babble of conversations echoes, reverberating inside the steel walls, everyone’s voices metamorphosing into a kind of amplified clang that has seeped into her head, one of those migraines that will take a day and a bottle and a pack of cigarettes to muffle away. Atop a converted old crab trap is the hi-fi, the turntable playing a scratchy Miles Davis riffing on “Boplicity.” Cheap por­table fans waft smoke up through vent flaps sheared open in the ribbed walls or through welded windows and opened hatchways. More guests appear now, like pirates storming a besieged vessel, men and women swaying up or down from planks and ladders, twisting down knotted ropes, appearing at the bases of staircase crates, laughing, talking, bearing bottles of wine and plates of chicken and ribs and corncobs. Always a rent party somewhere in the ’hood, and tonight it’s Karmann and Monk’s turn, sharing food and drink, even stuffing a few Washingtons—if you can spare them—in a fishbowl on the table next to the pile of green­ for-money rent-party invitation cards, just enough to get a soul through another month, though Monk doesn’t pay any rent, since no landlord knows about Box Town, but the money bought food and gas and wine and cigarettes and records and bail, maybe a few bills stashed in the reserve for any needy soul’s emergencies. “Hey, Slim-Bone,” a new arrival, a young man in a purple silk shirt, calls out as he tosses another green rent card on the table’s pile:

Don’t move to the outskirts of town
Drop around to meet a Hep Brown
A social party by Monk and Karmann
Saturday. Latest on Wax. Refreshments.

Excerpted from Graffiti Palace: A Novel by A.G. Lombardo, published in March 2018 by MCD, an imprint of Farrar, Straus and Giroux, LLC. Copyright © 2018 by A.G. Lombardo. All rights reserved.