Poets Jorie Graham and Yusef Komunyakaa and fiction writers T. C. Boyle and Richard Price will be inducted into the American Academy of Arts and Letters in a ceremony next month.

Random House announced recently that it has partnered with the literary and human rights organization PEN American Center to publish the 2009 O. Henry Prize Stories collection. 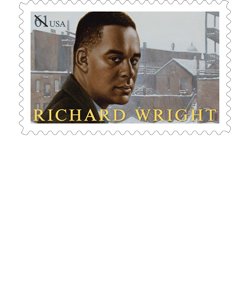 The United States Postal Service unveiled a first-class stamp yesterday honoring American author and former postal employee Richard Wright. The dedication took place in the lobby of the Chicago Main Post Office, just across the street from the building where the author of Native Son once worked as a letter sorter.

We've all read about the commercial publishing houses, independent presses, magazines, writers conferences, book festivals, and other literary operations that are feeling the financial pressure these days. At the risk of writing another sentence that includes "in these tough economic times," a phrase that, at this point, makes the eyes of even the most jittery realist glaze over, we'd like to turn the discussion to writing contests—especially those that require entry fees.

Given the economic forecast, are you submitting to more contests with hopes of winning that cash prize? Or has the budget item labeled “entry fees” been cut as a result of the belt-tightening measures that almost all of us have had to take?

Post a comment below and tell us how the economy has affected your contest submissions. And if you need a little something to get you in the mood for budgetary consideration—as if any of us needs more of that—here's “Economic Equation,” a video poem by Michael Ricciardo that, although produced in 2001, still resonates.

From a pool of almost three thousand applicants, 180 artists, scientists, and scholars—including more than thirty writers—received some good news from Edward Hirsch yesterday. The president of the John Simon Guggenheim Memorial Foundation announced the recipients of the 2009 Guggenheim Fellowships, each worth around forty thousand dollars.

Since its establishment in 1925, the foundation has awarded more than $273 million to nearly 16,700 individuals, including poets W. H. Auden, Langson Hughes, and Derek Walcott and fiction writers Vladimir Nabokov, Philip Roth, and Eudora Welty.

Below are videos of three of the new fellows—Terrance Hayes, John Haskell, and Chris Abani—reading and discussing their work.

In response to the familiar complaint that some literary agents don't even bother to respond to author queries, agent Nathan Bransford launched on Sunday the "Be an Agent for the Day" Contest. "Think you can spot the good queries from the bad? Wondering how the view looks from our side? Think it's easy to respond to everyone?" he challenged.

Lloyd Jassin, chairman of the executive committee and the advisory counsel of the New York Center for Independent Publishing (NYCIP), has resigned from his posts at the organization.

The telecommunications company Orange, in partnership with Arts Council England, announced today the finalists for the 2009 Orange Award for New Writers, an annual prize given to a woman novelist or short story writer who has published only one book of fiction.

The finalists are Ann Weisgarber, an Ohio native who now splits her time between Sugar Land and Galveston, Texas, for The Personal History of Rachel DuPree (Macmillan New Writing, 2008); Nami Mun, who was born in Seoul, North Korea, and currently lives in Chicago, for Miles From Nowhere (Riverhead, 2009); and Francesca Kay, who grew up in Southeast Asia and India and now lives in Oxford, England, for An Equal Stillness (Weidenfeld and Nicolson). The winner, who will be announced on June 3, will receive a bursary, or scholarship, of £10,000 (approximately $14,645). Joanna Kavenna won last year for her novel Inglorious (Faber).

Weisgarber is also on the longlist for the Orange Broadband Prize for Fiction, which was announced last month. The annual prize, also sponsored by Orange and given for the best novel by a woman writer, is worth £30,000 (nearly $44,000). Weisgarber joins Ellen Feldman (Scottsboro, Norton), Allegra Goodman (Intuition, Dial Press), Samantha Hunt (The Invention of Everything Else, Houghton Mifflin), Toni Morrison (A Mercy, Knopf), Gina Ochsner (The Russian Dreambook of Colour and Flight, Portobello), Marilynne Robinson (Home, Farrar, Straus and Giroux), Preeta Samarasan (Evening Is the Whole Day, Houghton Mifflin), Curtis Sittenfeld (American Wife, Random House), Miriam Toews (The Flying Troutmans, Counterpoint), and ten others on the longlist, which will be winnowed down to a shortlist on April 21.

Below is a video from last year's ceremony, where Rose Tremain received the Orange Broadband Prize for her novel The Road Home. (Don't miss the classic awards ceremony music they piped into the room after the announcement.)

Charged with picking finalists for the Griffin Poetry Prize, judges Saskia Hamilton, Dennis O'Driscoll, and Michael Redhill each read nearly five hundred books of poetry, including thirty-three translations, from thirty-two countries. Today the Griffin Trust for Excellence in Poetry, sponsor of the annual prize worth $100,000 Canadian (approximately $80,325), announced the results of all that reading: the Canadian and International shortlists.

The seven poets will be invited to read in Toronto at the MacMillan Theatre on June 2. The winners in each category will be announced on June 3. Each will receive $50,000 Canadian ($40,165).

It's worth noting that all but one of the publishers referenced above are independent presses. It's also worth noting that none of this year's finalists are being recognized for a collected, selected, or otherwise career-spanning book. Both of last year's winners had recently published such retrospectives: American poet John Ashbery for Notes From the Air: Selected Later Poems (Ecco) and Canadian poet Robin Blaser for The Holy Forest: Collected Poems of Robin Blaser (University of California Press).

Below are brief video profiles of Ashbery and Blaser, including clips of readings, produced by the Griffin Trust:

In addition to all the new books, public readings, and poem-a-day promotions that have so far marked National Poetry Month, a number of new films—from two-minute animated poems to feature-length documentaries—explore the work of poets and the impact it has on our lives. Here's a look at the poetry of John Ashbery, Lawrence Ferlinghetti, Allen Ginsberg, and Lorine Niedecker in film.