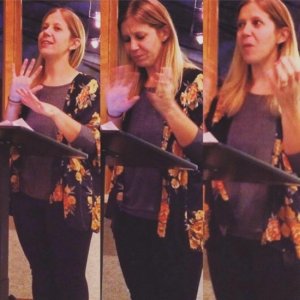 Gale is the author of Soldier On (Tupelo Press, 2015) and two chapbooks, Expeditions to the Polar Seas (Sixth Finch, 2013) and If You’re a Bear, I’m a Bear (H_NGM_N, 2013). Raised in Georgia and South Carolina, Gale holds a B.A. from the College of Charleston, an M.F.A. from the University of Massachusetts Amherst, and a Ph.D. from the University of Georgia, where she received the Robert H. West Award for outstanding graduate student. She is the founding editor of Jellyfish Magazine and lives in the North Georgia Mountains, where she directs the Creative Writing program at Young Harris College.

Her work may be found in Gulf Coast, Guernica, jubilat, American Poetry Review, BOAAT, Crazyhorse, and others. Gale has received fellowships from the Vermont Studio Center and the Kimmel Harding Nelson Center for the Arts, and her poems have received prizes including Best New Poets and Columbia: A Journal of Literature and Art. Her manuscripts have been shortlisted for contests including the National Poetry Series, Cleveland State University Poetry Prize, Akron Poetry Prize, Ahsahta Press Sawtooth Poetry Prize, Kathryn A. Morton Poetry Prize, and the Lexi Rudnitsky Editor’s Choice Award. She has worked on the editorial teams of jubilat, Crazyhorse, the Fairy Tale Review, Slope Editions, and the Georgia Review.

Her research and teaching interests include Documentary Poetics, Poetry Sequences, Memory Studies, Trauma Studies, and Literature of the Holocaust. Her doctoral research considered issues of marginalization in structures of memory, including gender and racial/national identity, with a concentration on long poems and poem sequences, documentary poetics, and hybrid forms.

Gives readings:
Yes
Travels for readings:
Yes
Please note: All information in the Directory is provided by the listed writers or their representatives.
Last update: Sep 20, 2019
X