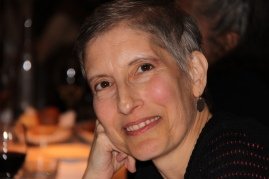 Sarah Rosenthal is the author of Lizard (Chax, 2016) and Manhatten (Spuyten Duyvil, 2009) as well as several chapbooks including Estelle Meaning Star (above/ground, 2014), disperse (Dusie, 2014), The Animal (in collaboration with artist Amy Fung-yi Lee, Dusie, 2011), How I Wrote This Story (Margin to Margin, 2001), sitings (a+bend, 2000), and not-chicago (Melodeon, 1998). She edited A Community Writing Itself: Conversations with Vanguard Poets of the Bay Area (Dalkey Archive, 2010). Her poetry has appeared in journals such as Eleven Eleven, Sidebrow, Zen Monster, Otoliths, eccolinguistics, textsound, and Little Red Leaves, and is anthologized in Kindergarde: Avant-garde Poems, Plays, and Stories for Children (Black Radish, 2013), Building is a Process / Light is an Element: essays and excursions for Myung Mi Kim (P-Queue, 2008), Bay Poetics (Faux, 2006), The Other Side of the Postcard (City Lights, 2004), and hinge (Crack, 2002). Her essays and interviews have appeared in journals such as Jacket, Denver Quarterly, Rain Taxi, New American Writing, and How2. She is the recipient of the Leo Litwak Fiction Award, a Creative Capacity Innovation Grant, a San Francisco Education Fund Grant, and grant-supported writing residencies at Vermont Studio Center, Soul Mountain, and Ragdale. From 2009–2011 she was an Affiliate Artist at Headlands Center for the Arts. She is a Life & Professional Coach and serves on the California Book Awards poetry jury.

Gives readings:
Yes
Travels for readings:
Yes
Prefers to work with:
Any
Fluent in:
English
Born in:
Chicago
Raised in:
Chicago, IL
Illinois
Please note: All information in the Directory is provided by the listed writers or their representatives.
Last update: May 31, 2016
X