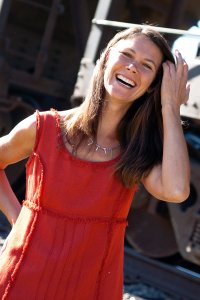 Rosemerry Wahtola Trommer lives with her husband and two children in Placerville, Colorado, on the banks of the wild and undammed San Miguel River. She served as San Miguel County’s first poet laureate (2007-2011) and as Western Slope Poet Laureate (2015-2017).

Devoted to helping others explore their creative potential, Rosemerry is the co-host of Emerging Form, a podcast on creative process (with Christie Aschwanden), co-director of Telluride’s Talking Gourds Poetry Club (with Art Goodtimes) and co-founder of Secret Agents of Change (with Sherry Richert Belul). She also directed the Telluride Writers Guild for ten years.

She believes in the power of practice and has been writing a poem a day since 2006. Her daily poems can be found at https://ahundredfallingveils.com/. Favorite themes in her poems include parenting, gardening, the natural world, love, science, thriving/failure and daily life.

She has 12 collections of poetry, and her work has appeared in O Magazine, on A Prairie Home Companion, in Ted Kooser’s American Life in Poetry, on fences in back alleys and on hundreds of river rocks she leaves around town. Her poems have been used for choral works by composers Paul Fowler and Jeffrey Nytch and performed by the Ars Nova Singers. Her most recent collection, Hush, won the Halcyon prize. Naked for Tea was a finalist for the Able Muse Book Award. Other books include Even Now, The Miracle Already Happening, The Less I Hold and If You Listen, a finalist for the Colorado Book Award. She’s won the Fischer Prize, Rattle’s Ekphrastic Challenge (thrice), the Dwell Press Solstice Prize, the Writer’s Studio Literary Contest (twice), The Blackberry Peach Prize, and has been nominated three times for a Pushcart Prize.

Gives readings:
Yes
Travels for readings:
Yes
Prefers to work with:
Any
Born in:
Grand Forks, ND
North Dakota
Raised in:
Golden, CO
Colorado
Please note: All information in the Directory is provided by the listed writers or their representatives.
Last update: Aug 31, 2020
X