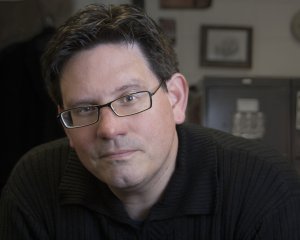 Patrick Hicks is the author of over ten books, including The Collector of Names, Adoptable, and This London—he also wrote the critically and popularly acclaimed novel, The Commandant of Lubizec, which was published by Steerforth/Random House.

His work has appeared in such journals and magazines as Ploughshares, Glimmer Train, The Missouri Review, The Georgia Review, Prairie Schooner, Alaska Quarterly Review, Salon, Chronicle of Higher Education, Commonweal, Huffington Post, Guernica, The Utne Reader, and many others.

He has been nominated seven times for the Pushcart Prize, he was recently a finalist for the High Plains Book Award, the Dzanc Short Story Competition, the Gival Press Novel Award, and the Steinberg Essay Prize. His poetry has appeared on NPR, The PBSNewsHour, and American Life in Poetry. His first novel held company among only 20 books selected for National Reading Group Month and it was listed as a Top Pick for First Year College Programs. A winner of the Glimmer Train Fiction Award, he is also the recipient of a number of grants and fellowships, including awards from the Bush Artist Foundation, the South Dakota Arts Council, the Loft Literary Center, and the National Endowment for the Humanities. He was recently a finalist for an Emmy and is the radio host of Poetry from Studio 47.

A dual-citizen of Ireland and America, he is the Writer-in-Residence at Augustana University as well as a faculty member at the MFA program at Sierra Nevada College. He has lived in Northern Ireland, England, Germany, and Spain, but has returned to his Midwestern roots. When not writing, he enjoys watching thunderstorms roll across the prairie with his British wife and he is a sucker for playing in the backyard with his son, who was adopted from South Korea.

The Commandant of Lubizec by Patrick Hicks

Gives readings:
Yes
Travels for readings:
Yes
Identifies as:
Irish American
Prefers to work with:
Adults
Fluent in:
English
Born in:
Charlotte, NC
North Carolina
Raised in:
Stillwater, MN
Minnesota
Please note: All information in the Directory is provided by the listed writers or their representatives.
Last update: Dec 23, 2019
X