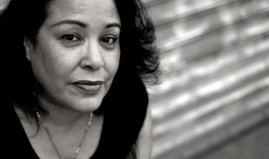 Nancy Mercado is the editor of the Nuyorican Women's Anthology published by City University of New York's Hunter College- Voices e/Magazine. A guest curator for the Museum of American Poetics, she is also an assistant editor for Eco-poetry.org; a web site dedicated to addressing the issue of climate crises. She also created Eco-Poetry's companion FaceBook page.

A writer, editor, activist and educator, Mercado was featured on National Public Radio’s The Talk of the Nation and the PBS NewsHour Special: America Remembers 9/11. Also featured in The Encyclopedia of Hispanic American Literature (Facts on File), she is profiled in Latino Leaders Magazine, as “one of the most celebrated members of the Puerto Rican
literary movement in the Big Apple.”

She served as the guest editor of Phati’tude Literary Magazine’s issue; ¿What’s in a Nombre? Writing Latin@ Identity in America and as an editor of the acclaimed underground literary and art publication: Long Shot, for 11 years; also serving as the publication’s editor-in-chief for one of those years.

Nancy Mercado’s work has been anthologized in dozens of award winning literary collections such as Poetry After 9/11: An Anthology of New York Poets Tenth Anniversary Edition (Melville House Publishers), Powwow, American Short Fiction from Then to Now, edited by Ishmael Reed (Da Capo Press) and Changer L’Amérique Anthologie De La Poésie Protestataire Des USA (Maison De La Poésie). The author of It Concerns the Madness (Long Shot Productions) and the editor of if the world were mind; a children’s’ anthology published by the New Jersey Performing Arts Center, Mercado also authored 7 theater plays which have all been produced.

Nancy Mercado continues to present her work throughout the US and abroad as a featured poet and conference panelist. She received her PhD from Binghamton University, SUNY and works as an Associate Professor where she resides in New York City.

Gives readings:
Yes
Travels for readings:
Yes
Identifies as:
Feminist, Latino/Latina/Latinx, Mixed-Race, Puerto Rican
Prefers to work with:
Any
Fluent in:
English, Spanish
Please note: All information in the Directory is provided by the listed writers or their representatives.
Last update: May 16, 2019
X