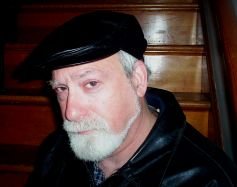 His work has also been anthologized in Beyond Lament: Poets of the World Bearing Witness to the Holocaust (Northwestern University Press, 1998), Messages From the Universe (iUniverse, 2002), America Remembered (Virgogray Press, 2010), Green (MLM, 2010), Looking Beyond (Scars Publications, 2011), and The Lighthouse (Scars Publications, 2017).

Waldman's fiction has been nominated for a Pushcart Prize.

He studied fiction writing with Mark Costello and Paul Friedman at the University of Illinois as an undergraduate.

Mitchell's new short story collection, BROTHERS, FATHERS, AND OTHER STRANGERS, is due out from Adelaide Books at the end of September, 2021. (See http://mitchwaldman.homestead.com/Brothe...)

Waldman's fiction has been nominated for the Pushcart Prize and has received a First Place award in the 13th Story Fiction Contest.

His short story collection Petty Offenses and Crimes of the Heart was a finalist in the 2015 Bookbzz Prize Writers Competition.

Gives readings:
Yes
Travels for readings:
Yes
Identifies as:
Jewish
Prefers to work with:
Any
Fluent in:
English
Born in:
Chicago, IL
Illinois
Raised in:
IL
Illinois
Please note: All information in the Directory is provided by the listed writers or their representatives.
Last update: Jul 13, 2021
X