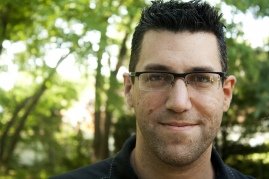 Matt Pasca has been using the written word to defamiliarize, deconstruct, and reconstruct the world around him since he was eleven. After giving up on his dreams of becoming a professional disc jockey and playing major league baseball, Matt earned a B.A. in English at Cornell University, where he minored in Africana Studies, learned Russian, worked the projection booth at Cornell Cinema and sang in Pamoja-Ni, the campus gospel choir. He went on to earn a master’s degree in Secondary English Education from Stony Brook University and began teaching at Bay Shore High School in 1997.

Matt lives just miles from the ocean with his wife, author/director/motivational speaker Terri Muuss, with whom he hosts a vibrant monthly poetry series at Cyrus Chai & Coffee in Bay Shore. He enjoys spending his days learning, sharing, giving back, creating community and traveling the world with Terri and their two precocious redheaded sons, THE ELLEN SHOW presidential experts from 2012-2013, Rainer and Atticus. www.mattpasca.com @Matt_Pasca

Gives readings:
Yes
Travels for readings:
Yes
Prefers to work with:
Any
Fluent in:
English
Born in:
East Meadow
Raised in:
West Babylon, NY
New York
Please note: All information in the Directory is provided by the listed writers or their representatives.
Last update: Jun 26, 2018
X