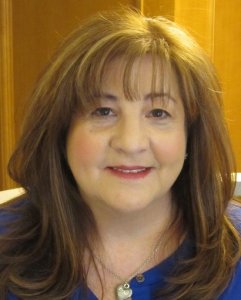 Lisa Romeo is the author of Starting with Goodbye: A Daughter’s Memoir of Love after Loss, (University of Nevada Press, 2018).

She works as an editor, teacher, and freelance book manuscript editor. Lisa’s work is listed in Best American Essays 2016 and 2018, and she has been nominated for additional BAE and Pushcart Prize awards.

Part of the founding faculty, Lisa is now Thesis Director for the Bay Path University MFA program, and she has taught previously at Rutgers and Montclair State Universities. She leads workshops for The Writers Circle in northern New Jersey, coaches writers privately, edits book manuscripts, and is an editorial consultant. She created and for six years ran the popular online *I Should be Writing* Boot Camp course for experienced writers of all genres.

Lisa is a frequent presenter at writing conferences and literary events, including HippoCamp Conference for Creative Nonfiction Writers, Italian American Studies Association, NJ Women Who Write, American Society of Journalists and Authors (ASJA), Books NJ, and others. She received a grant from the Vermont Studio Center and was the first recipient of the Conference Education Scholarship from the ASJA.

Other professional activities include serving as an editor for two literary journals, undertaking select ghostwriting projects, and doing some occasional poetry and humor writing (though not humorous poetry!).

Lisa’s MFA degree is from the Stonecoast Program at University of Southern Maine, and she earned a B.S. in magazine journalism from the Newhouse School at Syracuse University. In previous careers, Lisa has worked as an equestrian journalist, a public relations specialist and agency owner, and a real estate sales troubleshooter.

While she’s traveling to talk about Starting with Goodbye, Lisa is also at work on her next book.

Book Trailer: Starting with Goodbye, A Daughter's Memoir of Love after Loss