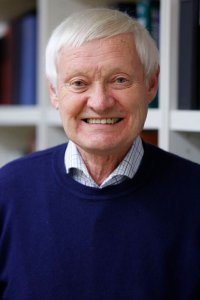 His novel AAN ZEE was published in 2019 by Southern University Press.  Three additional novels are still unpublished: Ierapetra -- or my Sister's Keeper,  NARCIS, and The Observatory.

His poems have appeared in Heidelberg Review, Offcourse, Raving Dove, Infiniti's Kitchen and The New Poet.  His early German poems have been recently published in Signaturen Magazin, Germany.

His German translations of selected poems by Michael Heller have appeared in Signaturen Magazin, Germany.

His photographs have been exhibited in several shows in the Albany region, and published in Cowbird, *82 Review and Hole in Head.

His work as a scientist (professor of Biochemistry and Molecular Biophysics at Columbia University) has been published in over 200 peer-reviewed articles and six books.  He shared the 2017 Nobel Prize in Chemistry with Jacques Dubochet and Richard Henderson.

Elected Fellow of the Royal Photographic Society of Great Britain

Elected Fellow of the Academy for Arts and Sciences

Nomination for the Pushcart Prize