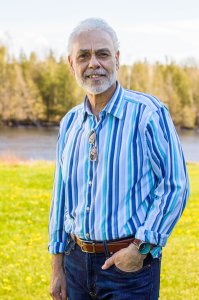 J.L. Torres is the author of the collection of short stories, The Family Terrorist and other Stories (Arte Publico, 2008) and the novel, The Accidental Native (2013). He has published stories in Hayden's Ferry Review, the Dr. T.J. Eckleburg Review, and the anthology, Growing Up Latino. Various poems in journals such as the North American Review, Denver Quarterly, the Americas Review, Crab Orchard Review, Bilingual Review, Connecticut Review, Tulane Review, Puerto del Sol, among others, most of which are in Boricua Passport (2Leaf Press, 2014). His second story collection, Migrations, recently won the inaugural Tomas Rivera Book prize, sponsored by University of California, Riverside, and the Los Angeles Review of Books.  The collection will be released by LARB Books on June 1, 2021.

Presently, he is doing research for a novella based on Puerto Rico's baseball icon, Roberto Clemente. He is Professor of English at SUNY Plattsburgh, where he teaches American literature, Latina/o Literatures, and Creative Writing. He co-founded the Saranac Review and served as its Editor for many years. Along with Carmen Haydee Rivera, he is the co-editor of Writing Off the Hyphen: New Perspectives on the Literature of the Puerto Rican Diaspora. He lives in Plattsburgh, New York--known to friends and relatives as "carajo county"--with his wife and two sons, a spirited Coton de Tulear called Moe-jo, and a lot of snow. He has no known hobbies, has never been in prison, has never trafficked drugs or pimped. Although raised in the heart of the South Bronx he did not belong to any gang unless you consider longtime friends as such. He has never had quirky and funky jobs, and is notoriously inept with tools.

Gives readings:
Yes
Travels for readings:
Yes
Identifies as:
Puerto Rican
Prefers to work with:
Any
Fluent in:
Spanish
Born in:
Cayey
Puerto Rico
Raised in:
New York, NY
New York
Please note: All information in the Directory is provided by the listed writers or their representatives.
Last update: Jul 14, 2021
X