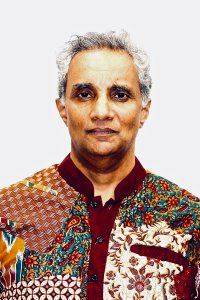 Inderjeet Mani is a writer, scientist, and professor who retired early from Silicon Valley to Thailand, where he volunteered in the Golden Triangle with the hill-tribe fictionalized in the novel Toxic Spirits. Born in India and educated across four continents, he studied creative writing at Penn (with Carlos Fuentes), at Bread Loaf (with Patricia Hampl), and at Harvard (with Paul Harding).

Prior to working in Silicon Valley, he was based in Washington, DC and Boston as a professor as well as a scientist at a not-for-profit think-tank advising the US government on advanced AI technology. His affiliations have included Georgetown University (Associate Professor), Yahoo (Senior Director), Cambridge University (Visiting Fellow), MITRE (Senior Principal Scientist), Brandeis University (Visiting Scholar), and MIT (Research Affiliate).

Mani’s six previous books (two of which have been translated into Japanese) include The Imagined Moment, on the computing of time in narrative, and other titles are from Oxford and MIT Press. His stories and essays have been published in  3:AM Magazine, Aeon, Apple Valley Review, Drunken Boat (Finalist for the Pan Literary Award, also one of Story South’s Million Writers Award Notable Stories of 2007), Eclectica, New World Writing,  Nimrod (Finalist for Katherine Anne Porter Prize),  PANK, Short Fiction Journal, Slow Trains, Storgy, Unsung Stories, Word Riot, and many other venues.

Gives readings:
Yes
Travels for readings:
Yes
Identifies as:
South Asian
Prefers to work with:
Adults
Fluent in:
English, French, Hindi
Please note: All information in the Directory is provided by the listed writers or their representatives.
Last update: Aug 28, 2019
X