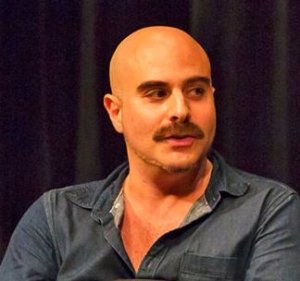 David Adjmi was called "virtuosic" by the New York Times, and he was named one of the Top Ten in Culture by The New Yorker in 2012. His writing has been featured or profiled in the New York Times, the New York Review of Books, LitHub, Electric Literature, BOMB, The Guardian, and others, His play, The Stumble, is a commission for Lincoln Center Theatre, and will be excerpted in the December 2020 issue of The Paris Review. Stereophonic (music by Arcade Fire’s Will Butler) is a co-commission for Second Stage Theatre and the Mark Taper Forum, and is scheduled to premiere on Broadway in 2021. His newest play, The Blind King, was developed at the Sundance Theatre Lab in 2019.

Marie Antoinette received a critically acclaimed world premiere co-production with A.R.T. and Yale Rep. The play won 3 Connecticut Critics Circle Awards including Best Play. Marie Antoinette received a New York premiere at Soho Rep and was produced at Steppenwolf, Woolly Mammoth and other theaters in the U.S. and Europe. 3C received its world premiere at Rattlestick Playwrights Theater in June 2012, and was dubbed "revelatory" by the New York Times and “the most divisive and controversial play of the season” by the New York Post. 3C was selected as one of the top ten plays of 2012 by the Post, Time Out and the Advocate. Elective Affinities premiered at the Royal Shakespeare Company, and received a sold out U.S. premiere at Soho Rep starring Zoe Caldwell (Top 10 of the year in Time Out New York, New Yorker.)

David currently holds commissions from Playwrights Horizons, Second Stage Theatre, Lincoln Center Theater, Yale Rep, Berkeley Rep, the Royal Court (UK), and the Center Theatre Group. He was awarded a Mellon Foundation grant, the Guggenheim Fellowship, the Whiting Writers’ Award, the Kesselring Prize for Drama, the Steinberg Playwright Award (the “Mimi”), McKnight and Jerome fellowships, the Fadiman Prize from Center Theatre Group and the Bush Artists Fellowship, among others. He is the recipient of residencies from the Dora Maar House, American Academy of Rome, the Bogliasco Foundation, The MacDowell Colony, The Millay Colony, The Corporation of Yaddo, and UCross.

He has served on panels for the Luminato Festival, National Endowment for the Arts, the McKnight Foundation, and the Massachusetts Cultural Council. He has taught workshops and seminars at the Iowa Playwrights Workshop, Harvard University, Yale School of Drama, Rutgers University, Primary Stages, NYU, Mark Taper Forum, CalArts, Southampton Writers Conference, and the University of Rochester.

Two collections of David’s work are published by TCG, and his work is included in The Methuen Drama Book of New American Plays. His memoir, Lot Six, will be published by HarperCollins in June 2020.

What I'm reading now:
Luster by Raven Lailani, Cleanness by Garth Greenwell, A Heart so White by Javier Marias

Gives readings:
Yes
Travels for readings:
Yes
Identifies as:
Arab American
Prefers to work with:
Adults
Fluent in:
English
Born in:
Raised in:
New York , NY
New York
Please note: All information in the Directory is provided by the listed writers or their representatives.
Last update: Aug 20, 2020
X