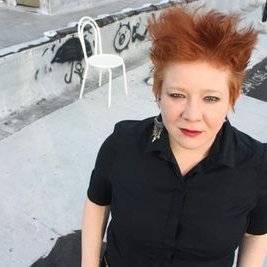 Author Chavisa Woods is a MacDowell Fellow and was the recipient of the Shirley Jackson Award, the Kathy Acker Award in Writing, the Cobalt Prize for Fiction, was a three time Lambda Literary Award finalist for fiction, and in 2009 she received the Jerome Foundation award for emerging authors.

Woods is the author of four books including, 100 Times (A Memoir of Sexism), Seven Stories Press, 2019; Things To Do When You're Goth in the Country, (short fiction), Seven Stories Press, 2017; The Albino Album (a novel) Seven Stories, 2013; and Love Does Not Make Me Gentle or Kind (full-length fiction) Autonomedia Press /Unbearables imprint, 2013 (second edition). The first edition of her debut novella was published by Fly by Night Press, a subsidiary of A Gathering of the Tribes, in 2009,.

Her work has received praise from the New York Times, The LA Times, Publisher’s Weekly, The Stranger, The Seattle Review of Books, Booklist, Lambda Literary Review, Lit Hub, Electric Lit, The Feminist Review, The Rumpus, and many other media outlets. She has appeared on The Young Turks, NPR’s 1A in conversation with Jean Carol hosted by Joshua Johnson, Tell Me Everything with John Fugelsang, NPR Saint Louis, The Ellectorette, and many other talk shows.

She has appeared as a featured author and performer at such notable venues as The Whitney Museum of American Art, The Mid- Manhattan Public Library at 42nd Street, City Lights Bookstore, Town Hall Seattle, The Brecht Forum, The Cervantes Institute, Elliot Bay, Bluestockings Bookstore, and St. Mark’s Poetry Project. She was also an active member of Butch Morris’ Chorus of poets for ten years.

In addition to being a literary author, Woods has nearly 15 years of experience working as a fundraising consultant and Grant Manager for numerous arts and social services nonprofit organizations including ACORN, The LGBT Center (Manhattan), GLSEN, The Refugee Women’s Alliance, Jewish Voice for Peace, My Sistah’s House, and others. She studied nonprofit management and fundraising at the NYU Heyman Center, and the NYC Foundation Center.

In 2020, Woods accepted the position of Executive Director of A Gathering of the Tribes.

Gives readings:
Yes
Travels for readings:
Yes
Prefers to work with:
Any, At Risk Youth, Disability, Homelessness, LGBTQ, Mental Health, Teenagers
Fluent in:
English
Born in:
CENTR
Raised in:
Sandoval, IL
Illinois
Please note: All information in the Directory is provided by the listed writers or their representatives.
Last update: Jun 04, 2020
X