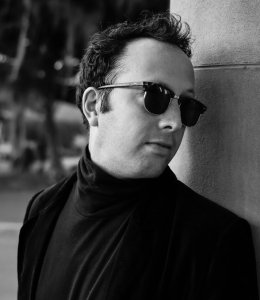 BENJAMIN ALESHIRE is an artist based in Burlington, VT & New Orleans, LA. His writing has appeared in The Times of London, El Mundo, Boston Review, Iowa Review, Adroit, London Magazine—and on television in China, Spain, and the U.S. For many years he made his living as a poet for hire, writing poems for strangers on a manual typewriter, and touring internationally. An excerpt of his novel-in-progress, POET FOR HIRE is published in Lit Hub, and he won a James Merrill Fellowship to attend the Vermont Studio Center in 2020. Ben serves as a conributing editor for Green Mountains Review.

Ben also founded a small publishing cooperative called Honeybee Press, which uses letterpress printing, hand papermaking, and traditional bookbinding. His broadsides and books are archived in the Special Collections of Yale University, the University of Vermont, and St. Lawrence University.

Ben attended the Breadloaf Writers Conference as a waiter-scholar, and in 2016 and 2019 he was a finalist for the Iowa Review Award in Poetry. His work as a poet and musician has been featured in El Mundo, (Spain,) NEON Magazin (Germany), The Havana Times (Cuba), La Repubblica (Italy), NPR Boston, SPIN, USA Today. The Times of London broke with 233 years of their editorial history by inviting Aleshire to contribute a poem as a lead article, in conjunction with a feature article on his work during the Edinburgh Fringe Festival. Ongoing projects include a full length manuscript of poems, FAKE NOOSE (a finalist for the 2020 Alice James Award) and a a novel-in-progress, POET FOR HIRE, for which he's currently seeking representation.

Gives readings:
Yes
Travels for readings:
Yes
Identifies as:
White
Prefers to work with:
Adults
Fluent in:
English, Spanish
Born in:
Rutland, VT
Vermont
Raised in:
Burlington, VT
Vermont
Please note: All information in the Directory is provided by the listed writers or their representatives.
Last update: Oct 21, 2020
X