Turning Time Around: A Profile of Donald Hall

From the anthologies and into the university, Hall’s movement in the first four decades of his career charts the creation of the poetry establishment as we know it today. In the early 1960s he accepted a post at the University of Michigan, teaching poetry when creative writing programs were an unusual thing. The novelist and biographer Edmund White, who was a student of his in 1962, remembers Hall as “sort of round-faced, slightly chubby, like a very healthy chubby man. And he would sit on the edge of the desk, and in those days you could smoke in the classroom. He would sit and smoke a cigar. He introduced us to high-class gossip. He had just interviewed T. S. Eliot for the Paris Review, and Ezra Pound. So he was full of anecdotes about that. I suppose the kind of intensity and awe that he brought to his discussions of those people made us all feel that being a poet would be exciting.” 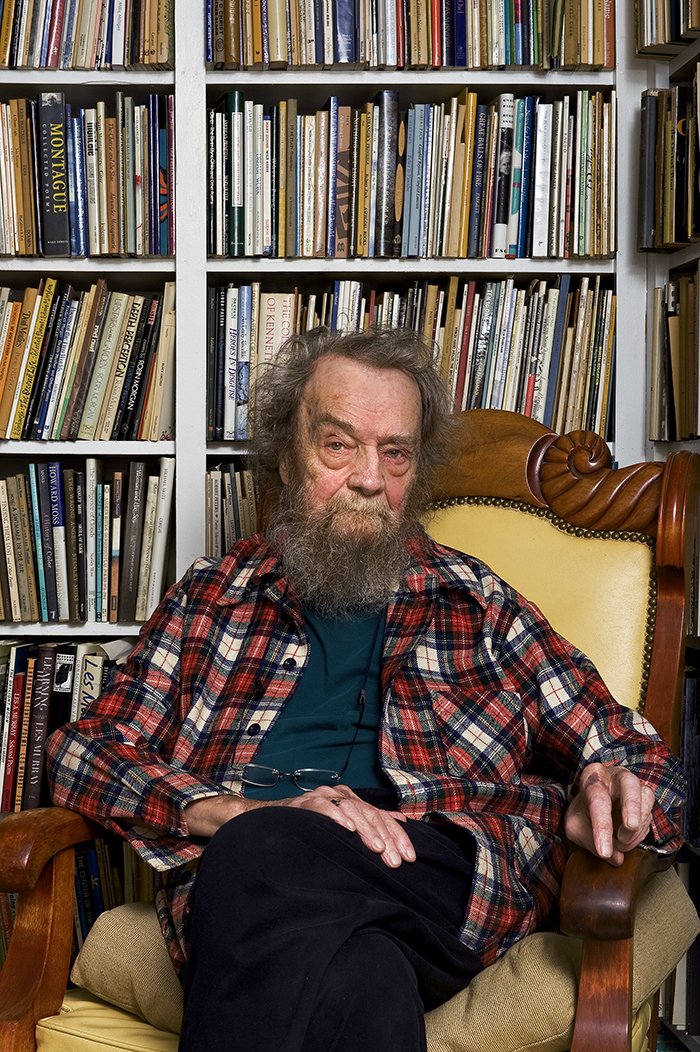 White was writing poetry at the time, and Hall eventually came to discourage him by pointing out that “Everything I was doing could have been done better in the nineteenth century,” White recalls. White saw Hall ten years ago at Princeton and reminded him of this fact, to which Hall said, “I think that turned out all right.” However, Hall did encourage Lawrence Joseph. “He was an absolutely fantastic teacher,” Joseph wrote in an e-mail. “I know of no one who knows about and loves poetry more than he does, and his generosity knew no bounds. It’s been a great, lifelong gift having had one of our finest poets and prose writers as a teacher.”

Today Hall remains glad that he taught, but relieved that he left when he did, after thirteen years. “I was beginning to play the tape. You know what I mean. When I began, kids would ask a question and I’d never thought of the subject, so when I answered I learned something. But at the end they weren’t asking anything I didn’t know about. It was very good to get out of teaching at that point.”

While he was at Michigan, Hall’s first marriage imploded, and he went through a difficult period of heavy drinking and self-pity. He eventually met Jane Kenyon, one of his students, and married her in 1972. They decided to spend a sabbatical year at Hall’s grandparents’ New Hampshire farm, where Hall had cleared brush and milked cows as a child, in 1975. Once there, Jane didn’t want to leave. “She said in October of that year she would chain herself in the root cellar before going back,” Hall remembers. “In December I resigned from the English department.”

Turning his back on tenure and health care at the age of forty-seven worried Hall so much he took out a subscription to Money magazine. Very quickly, however, the freedom from teaching relieved his anxiety. “The burst of energy, to be in this house, and to be writing all day!” Hall exclaims now. “I was working ten hours a day! I always managed to work on Christmas Day, just so I could say so. Jane, unless she was in the depths of depression, would be up in her study working.” It was in this house that he wrote most of his breakthrough book, Kicking the Leaves (Harper & Row, 1978), which finally smashed the shackles of the old formalism and breathed a Whitmanesque breadth into his lines. Here, too, he wrote his Caldecott Medal–winning children’s book, Ox-Cart Man (Viking, 1979), which began as a story told to him by a friendly uncle, who talked about a man who used to load up a cart with goods to take to the market in Portland, Maine, and then sold everything but the cart before returning home.

Hall has always been an active correspondent, but in New Hampshire his correspondence expanded exponentially. If you wrote to him, he responded. Novelist and poet Alice Mattison, who was Jane Kenyon’s best friend, remembers striking up a correspondence with her friend’s husband in 1986, the year Hall’s The Happy Man was published by Random House. “It did not get a lot of attention,” Mattison says now. “His editor left; it was orphaned. Not a lot of people knew about it. I loved the book, so I wrote him a letter, and he answered the letter in detail, and we were just launched.” In over twenty-five years, their correspondence hasn’t stopped. “There have been times when letters overlapped and we began two correspondences,” she says.

Mattison, like many of Kenyon’s friends, was devastated when Kenyon got sick and died. “There was nothing like going out for coffee and cake with Jane,” Mattison says. “I used to hike with her sometimes; she would carry along a backpack with everything you could think of, and we’d stop every ten minutes to have snacks and water, talk. She came at life with incredible intensity, and was kind.” Hall’s grieving for her was intense—and public. And it was followed, as he has written, by a period of manic promiscuity. Mattison has not considered any of it out of bounds. “I was grieving too; I was also quite beside myself. I thought he made sense. I didn’t think he was crazy. The losses—one’s own personal losses—are the only losses in the world when they happen to you. Nothing would have seemed excessive.”

Throughout our afternoon together Hall mentions Kenyon frequently, always in the present tense. Her grave is not far away, and if the pain of her loss is not so near as to draw tears, Hall seems to remember it in small ways and big—reflexively, fondly, without shame. She reappears throughout Essays After Eighty, and the memory of surviving her loss remains acute. “I wrote poems on her death or out of her death for about two hours a day,” he remembers. “I couldn’t keep on after that. And then I had another twenty-two hours of misery. But when I wrote about her, I was almost happy, and writing about her death and all that misery was something that kept me going.”

Now, another half dozen volumes of poetry later, there will be no more poems. “Poetry is sex,” Hall says, alighting with mischief and melancholy, when I ask if he really has given up writing new poems. “No testosterone,” he adds. Prose remains, however, even if it requires more work than ever. “I used to write a book review in three drafts,” he says, hardly bragging. Talking about one of the pieces in his new book, he idly mentions it went through eighty drafts. How is that possible? “I will write down a word, and I know I’m not going to use it eventually, it’s a blank word I will fill in later, and probably in eighty drafts I’ve had ten or eleven words in one place, and each time it’s replaced by something more particular, or that fits the tone better, or with a better sense of opposites, you know, putting together words that don’t belong together.”

This work, and personal correspondence, keeps him busy. As he writes in Essays After Eighty, each day begins in the same way: “In the morning, I turn on the coffee, glue in my teeth, take four pills, swallow Metamucil and wipe it off my beard, fasten a brace over my buckling knee…then read the newspaper and drink black coffee.” Kendel Currier, his aptly named assistant and cousin, comes by to drop off manuscripts for further revision, and he dictates several letters to her. “His messages are lengthy, friendly, chatty, modest, full of reminiscences, and sometimes funny,” Padgett says. “He’s what—eighty-five?—and I can barely keep up with him.” Mattison wonders if Hall is helped here by his disclosures. “He is totally honest, he has no sense of privacy, doesn’t have a lot of secrets, and so he just says whatever needs to be said.”

Mattison is on the receiving end of one of Hall’s latest obsessions: his poems. He may have stopped writing them, but he has begun revising poems—again—to create a new (and much smaller) selected volume, to be released in 2015. She is one of his self-designated “hard-assed friends” to whom he has sent revised versions of his poems. “I can’t help myself,” Hall pleads when I ask why he does it, this continuous revising. “You do fifty drafts, publish it in a magazine, see it in the magazine, then start rewriting it. You put it in a book, and then the book would come,” he continues, then switches into the first person, as if to own up to the mania. “I’d put it here,” he says, pointing to a shelf crowded with photos of Geoffrey Hill and other friends. “I’d hate to open it up, because I know the first thing I’d look at, I would want to change something.” And so he does.

John Freeman’s most recent book is Tales of Two Cities: The Best and Worst of Times in Today’s New York (OR Books, 2014), an anthology of poetry and prose about New York in the age of income gaps. He is writing a book about American poetry for Farrar, Straus and Giroux.