The Poem Chooses You

Amos Koffa was a skinny, bespectacled, middle-school outcast with few friends when the student first wrote a poem. Amos knew of Maya Angelou (after hearing her poem “In and Out of Time” in the 2006 comedy Madea’s Family Reunion, Amos walked around the house murmuring the title like an incantation) but had never written anything that wasn’t part of a school assignment. 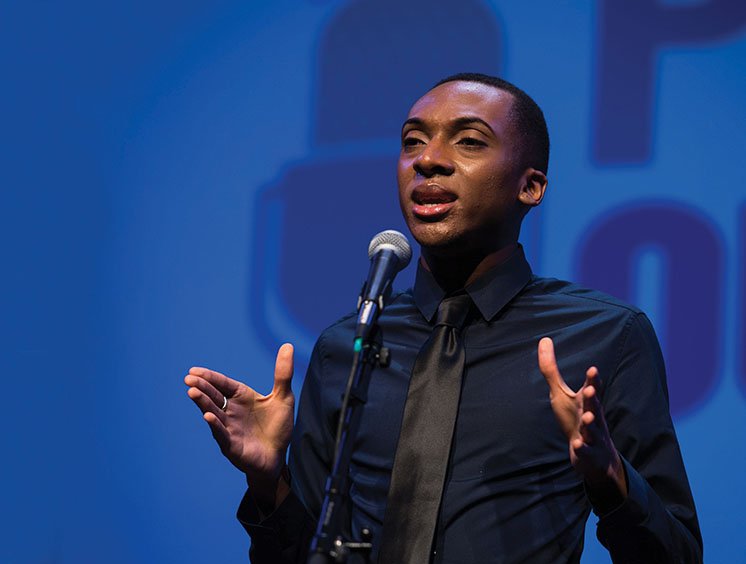 Then Amos, who uses the pronouns “they/them/their,” saw a flyer in the library of Science Park High School in Newark, New Jersey: a call for submissions for Talented: 2012 Poetry Collection, published by the America Library of Poetry. “I wrote a poem about being sad,” Amos says. “The title was ‘Sorrow.’ It got put in the book, and I was really happy. I felt like I did something, like my voice mattered.” Amos was fourteen years old.

That year, Amos and other eighth graders watched the school-wide competition for Poetry Out Loud, a national recitation contest created by the National Endowment for the Arts (NEA) and the Poetry Foundation and administered in partnership with state arts agencies. Amos was a Glee devotee who aspired to be an actor, but this was something new: These were teenagers performing poems by William Shakespeare, Yusef Komunyakaa, and Naomi Shihab Nye. Using their bodies and voices to articulate confusion, passion, and loneliness. Earning applause.

Poetry Out Loud is for high school students only, but the eighth graders did a mock contest in the classroom; teachers and students raved about Amos’s performance. When the yearbook came out, Amos, the gangly teen with a habit of ducking their head at the end of every sentence, was stunned to see their photo with the caption “Most Poetic.”

Breana Sena’s family was serious about the arts. Her father had trained with the Joffrey Ballet before becoming a computer engineer, and both Breana and her older sister, Celeste, took classes at the Ailey School, located at the Joan Weill Center for Dance, in New York City.

Acting was Celeste’s passion, so Breana immersed herself in dance: ballet, flamenco, hip-hop, West African, jazz. Although Breana played Hermia in a middle-school production of Shakespeare’s A Midsummer Night’s Dream, when Poetry Out Loud came along in high school, Breana ceded the turf to her older sister, who went on to dominate the competition at Ronald E. McNair High School for three years: school-wide champion in 2014, regional competitor in 2015, and state winner in 2016.

“I felt like I had to step up, like I had to continue a legacy,” Breana says. She began sifting through the Poetry Out Loud anthology—a 900-poem online digest from which students must make their selections—for a fierce and complicated female voice, for words that might speak to her: a half-Dominican, half-Jamaican high school junior growing up in Jersey City.

Emily Li used to be nonplussed by poetry. “I’d get frustrated when the teacher gave us a poem and nobody knew what the meaning was. I know we did Emily Dickinson—she sticks in my mind because she has the same name as me. We also did ‘Fire and Ice’ by…who was it? Robert Frost. Poetry was such a blur.”

The youngest child of Chinese immigrants, Emily started singing along with YouTube videos when she was eight. At nine, she sang at a high school gala, in a gymnasium packed with three hundred people; after ninth grade, she took a gap year to perform on Chinese Idol, the singing competition program based on the British television series Pop Idol, living in hotels and trying not to breathe too much in Shanghai, where the smell of pollution hung in the air like rancid socks.

Back at the Lawrenceville School, a private New Jersey boarding academy where Poetry Out Loud participation was a requirement for freshmen and sophomores, Emily figured she might as well aim for a good grade. She clicked through the anthology and stumbled on Tony Hoagland’s “Personal.”

“I loved that poem so much,” she says. “It was about how everyone says, ‘Don’t take it personal, calm down; don’t be so emotional.’ And the poem says, ‘You know what? I am going to take it personal.’”

Emily was knocked out at regionals that year for failings that remain obscure. “The judges were writing things down, but we didn’t get to see that,” she says. The following fall, even though Poetry Out Loud wasn’t mandatory for juniors at Lawrenceville, she decided to give the contest another try.

When Poetry Out Loud was launched in 2005, I felt leery. This was the blueprint: High school teachers would help students select, interpret, and memorize classic and contemporary poems, then stage classroom and school-wide contests with volunteer judges—other teachers or administrators, local poets or actors or notable alumni. The school winners would advance to regional contests, then statewide bouts, organized by each state’s arts agency. In late April, one Poetry Out Loud champion from each of the fifty states, plus D.C., Puerto Rico and the U.S. Virgin Islands, would gather in an auditorium at George Washington University for a final competition. The grand prize? Twenty thousand dollars.

The whole enterprise seemed so old school—Really? Memorize and regurgitate metered texts by dead white guys?—when my aim, as a visiting writer in New Jersey classrooms, was to wake students to the muscle, range, and freshness of contemporary voices, including their own. I recoiled from the competitive aspect, too. “Wouldn’t that shift focus from the process to the prize?” I thought.

The program’s first year made me a convert. At Trenton High School, I helped an enthusiastic junior articulate the distinct voices—naive daughter and grief-racked mother—in “Ballad of Birmingham,” Dudley Randall’s poem about the 1963 church bombing that killed four African American girls. Over several visits to her school, I watched the kids’ recitations grow a little more robust, their analysis of poetry a bit more probing.

It’s been twelve years. I’ve coached Poetry Out Loud kids in cities and suburbs, vast regional high schools and tiny charter academies. Sure, some comb the anthology for the shortest pieces, then shamble onstage for a gutless rendition of “Twinkle, Twinkle, Little Star.” But more often, this is what happens: The words get under their skin. A teenager finds something in a five-hundred-year-old sonnet that twangs an experience of rage or heartbreak. They notice ironies and allusions. They breathe where the poet breathed.

I remember one defiant, distracted boy at a suburban high school who latched on to a World War I poem by Rupert Brooke. Suddenly he wanted to win this poetry thing; teachers told me he quit cutting class and started turning in homework. A girl in Camden read Paul Laurence Dunbar’s “We Wear the Mask” and told me that was just how it felt to be female, to be Latina, to smile even when she was shredded inside.

“You may think you’re picking the poems,” I told the kids. “But the poem also chooses you. Your job is to figure out why.”

By sophomore year, Amos and their mother had left Newark, but Amos was still committed to competing in Poetry Out Loud. The performing arts teacher at Amos’s new school, Burlington County Institute of Technology, insisted they practice without a microphone, so they could push their voice to the back rows of the auditorium.

At the regional competition, Amos’s left foot quivered as they stood at the microphone. They got as far as state finals that year, unusual for a tenth grader, and the year after that, when they had to wheedle a chemistry teacher to be their faculty sponsor.

Amos was also finding a tribe: the kids who huddled in the green room before the state contest each March, swapping cell phone numbers and Instagram accounts. “I live in a very provincial area,” Amos says. “At Poetry Out Loud, when I see students from all parts of New Jersey, they’re so accepting and kind.”

The summer after sophomore year, Amos won a scholarship to a summer program; at a meeting of the group’s gay-straight alliance, Amos came out as queer for the first time, then ran to the bathroom and wept. “They were all so proud to be what they were,” Amos says of the members of the alliance. “I was ashamed.”

But by senior year, Amos was older—and bolder, challenging teachers when they elided Bayard Rustin’s homosexuality in discussions of the civil rights movement; performing an original spoken-word piece about kids who are transgender in the school’s talent show. “My acting teacher tells me we should do things that put us out of our comfort zone,” Amos says. “I always get scared before performing, but I don’t let the fear stop me.”