The Poem Chooses You

When Breana read “I Sit and Sew,” Alice Moore Dunbar-Nelson’s 1920 poem, written in the voice of a woman conscripted to traditionally feminine tasks while men perform the work of war, she knew she’d found her piece. “I had to put myself in that time period and feel what she felt,” she says. “Hopeless, oppressed, like you can’t do what you most desire to do.” 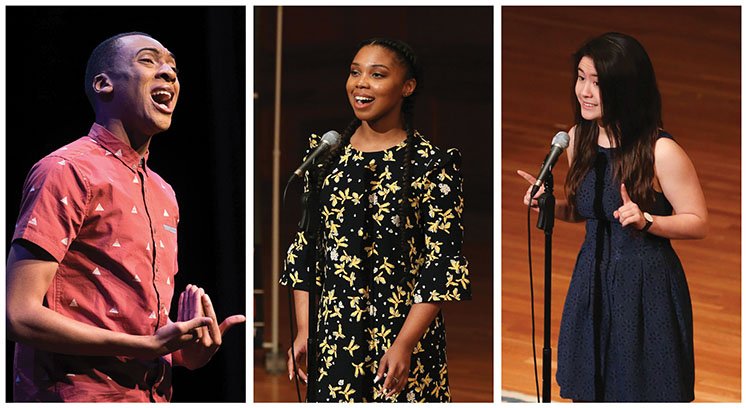 Breana coded the text: She circled unfamiliar words, highlighted allusions and assonance, penciled in pause marks. She forced herself to memorize the white space as well as the words themselves.

The biggest challenge was to dial back her naturally effusive style. Poetry Out Loud walks a tremulous line between reciting and acting; judges tend not to favor interpretations with extravagant movements, singsong readings, or affected Scottish brogues. “I have to contain myself,” Breana says. “Sometimes I’ll watch myself in the mirror and make sure my gestures look natural instead of forced.”

At the regional contest, held in February 2017 in the auditorium at Rutgers University’s Camden campus, Emily heard the crowd’s chuckles and figured she’d hit home with May Swenson’s “Analysis of Baseball.”

The poem’s content was a stretch, Emily confides. “I sang the national anthem [with the Westminster Neighborhood Children’s Choir] at a Trenton Thunder game when I was, like, seven. I was so bored, but there were times when they run around the bases and get to the end—what’s that called?—when you feel the energy of the people watching.”

Swenson’s piece thrums with rhyme, onomatopoeia, and a staccato beat. Emily’s other choices were subtler: David Kirby’s “Broken Promises,” with its personification and tonal shifts, and Percy Bysshe Shelley’s “Ozymandias.”

Emily copied all three into a blank book in her spiky handwriting and worked on channeling each poem’s dominant emotion: jumpy anticipation for “Analysis of Baseball,” regretful anger for “Broken Promises.”

Two days before the state finals, she was still fine-tuning. “‘Broken Promises,’ I really need to tweak a bit. I don’t understand it as much as I should. With ‘Ozymandias,’ I’m still trying to find a way to make it click. ‘Analysis of Baseball,’ I’m going to leave alone. If I do it too much, it will lose the excitement.”

Last year, nearly four hundred thousand kids across the United States took part in Poetry Out Loud. It’s not just for drama geeks or English stars; the program draws jocks and stoners, weirdos and cheerleaders, kids headed for college and kids who seem to be wandering off course.

One day I stood in a circle of teenagers at an alternative school in South Jersey. We’d just been discussing Robert Frost’s “Fire and Ice,” and someone had a question. The voice was insistent but polite. “Miss? Hey, Miss. How is this gonna help us in the end?”

Good question. Poetry isn’t a cure, and it isn’t a miracle. It won’t jump your car’s dead battery or fix your leaky roof. It won’t feed your baby or save your dying grandmother. But there are words, phrases, whole poems that—in the grimmest, loneliest, most shattered moments of my life—have offered me a lozenge of light. After my dad died, I sought solace in poetry: Rumi, Lucille Clifton, Dorianne Laux. I wasn’t looking for words to help me feel better; I was looking for words to help me feel—to give name and shape to the gravitational suck of loss, to let me know that I was not alone.

Poetry is a reminder that being human is a crazy weave of pain and beauty and that our job is to live it all, right out to the end of our days.

On the morning of the 2017 New Jersey Poetry Out Loud state finals, Breana woke at 5 AM. She ate a Velveeta snack and drank three cups of tea. She told the taxi driver: “I’m not talking to myself; I’m practicing my poems.” Emily arrived at the competition’s green room, a music studio at the College of New Jersey, with her hardcover journal and uncombed hair. Amos was last, arriving on a school bus, along with their teacher and a gaggle of classmates, earbuds pumping Beyoncé on the way.

The emcee ran the group through vocal warm-ups—“A tutor who tooted a flute / tried to tutor two tots to toot”—and the state’s Poetry Out Loud coordinator reiterated the rules: Don’t change the order of your poems. Don’t put your foot on the microphone stand. “If you get stuck, if you need help, there is one word that will get you out of trouble. What is that word?”

At Poetry Out Loud competitions, a panel of judges scores each contestant on physical presence, voice and articulation, dramatic appropriateness, evidence of understanding, and overall performance. Another judge listens for accuracy alone.

Sometimes a careless rendition—soulful and true but with a dropped stanza or a few small mistakes—can sink a score. On the other hand, a reading can be word-perfect but heartless. Some kids use the same clichéd repertoire of gestures—a plaintive wave, a fist hammering the heart—for all three poems. Others can’t contain a nervous tic. Some speak too fast or pause too long.

But each year there is at least one performance that makes me forget myself and the scoring rubric and the scratchy seat under me. I wait for it: the poem that will leave me wakeful, trembling, changed.

That morning, Emily reveled in the crisp diction of “Analysis of Baseball.” Amos bent their voice like a blues guitar, delivering the torrent of Jack Collom’s “Ecology.” Breana turned “I Sit and Sew” into an astringent prayer, her eyes wet with the rage of a woman consigned to stitch “the little, useless seam.”

Round one. Round two. The judges marked their tally sheets. Then it was Amos again—their third poem, their senior year, their final shot at Poetry Out Loud—with James L. Dickey’s “The Hospital Window,” a piece they’d attempted and abandoned the year before. Amos gestured to an imagined sixth-floor window, face tipped toward the sky. “My father is there, / In the shape of his death still living.” My skin prickled, my eyes stung. Yes. My father, too, is gone, and not-gone, a presence and a wound. Amos stepped back from the microphone, eyes cast down.

Ten minutes crawled by while a tabulator added the scores. The state champion would receive an all-expenses-paid trip to Washington, D.C., for the national round of competition and the chance to perform poems just a few Metro stops from a president who had attempted to ax the NEA. I hoped some members of Congress might mosey over to George Washington University for the final rounds.

Finally, it was time. “The New Jersey Poetry Out Loud Champion for 2017…Amos Koffa!” Amos abruptly tumbled backward from the risers; had they fainted? But no, there Amos was, vertical again, eyes huge and narrow shoulders shaking. Breana was declared the day’s runner-up and met that news with a stiff smile; later she wondered whether she should have begun with her strongest piece, “I Sit and Sew.” Emily remained characteristically upbeat: “Amos one hundred million percent deserved that!”

Amos couldn’t linger in the afterglow. There was a fusillade of photos, and a canvas tote of swag, and then the teacher was herding Amos and their classmates to the bus. In the lobby, kids waved cell phones and reached out for hugs.

In less than six weeks, Amos would board a train, along with their high school drama teacher, for a first trip to Washington, D.C. They would visit the Mall that isn’t really a mall—more like a giant plaza dotted with monuments. They would tour the National Museum of African American History and Culture and feel shocked by how much was absent from the high school curriculum. At the national competition, they would jump when “Amos Koffa” was called as one of three semifinalists from the eastern region. They would feel proud, even when they didn’t win.

Poems live. They voice something irrepressible in us. But on that brisk spring afternoon in New Jersey, Amos looked stunned at what poetry had wrought, at the classmates swanning around them—a child of Liberian ancestry raised by a single mother, a gender-queer gadfly, an aspiring social worker and spoken-word artist, head visible above the rest as they straggled across the parking lot.

The 2018 National Finals will be held April 23 to 25 at George Washington University. For more information, visit www.poetryoutloud.org.

Anndee Hochman is a journalist, essayist, and teaching artist. Her column, “The Parent Trip,” appears weekly in the Philadelphia Inquirer, and her work has also been published in O, the Oprah Magazine, Redbook, Cooking Light, and the Journal of the American Medical Association. She is the author of Anatomies: A Novella and Stories (Picador, 2000) and Everyday Acts & Small Subversions: Women Reinventing Family, Community, and Home (Eighth Mountain Press, 1994).