The Literary Dimensions of TikTok

This spring, writer Michele Filgate discovered that an essay anthology she edited, What My Mother and I Don’t Talk About: Fifteen Writers Break the Silence, was trending on Amazon—a surprise given that three years had passed since the book’s release by Simon & Schuster. But Filgate would soon learn what prompted fresh interest in the volume: a one-minute TikTok video in which a user named @ceciliabereading, also known as Cecilia Beard, professed her love for the book. The clip had been viewed more than a million times when Filgate saw it. Within days the book sold out and went into a second printing.

Filgate was overjoyed. That fifty-six-second testimonial, she says, did more for sales than any traditional review: “It gave a whole new life to my book.” 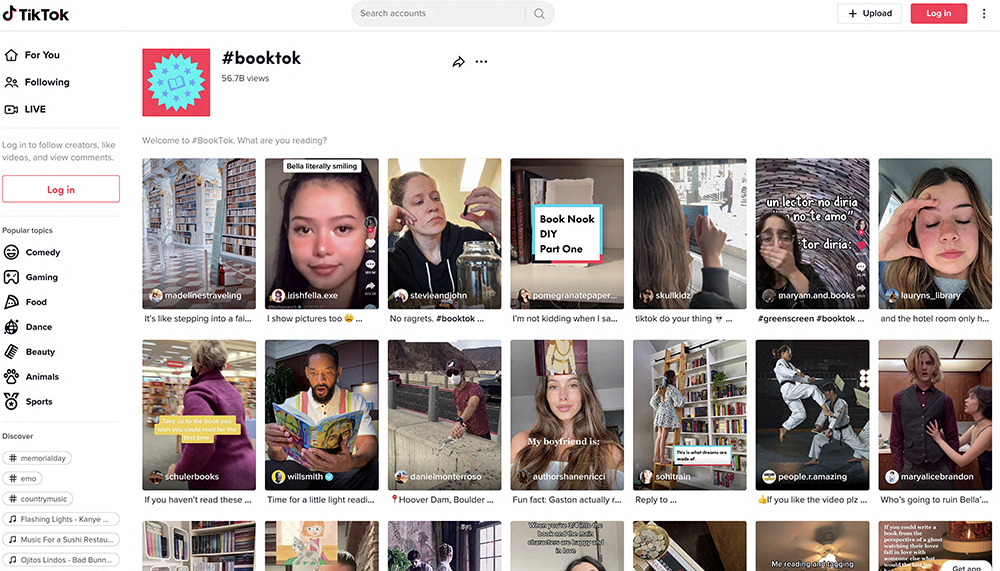 Since 2020 #BookTok, the hashtag that represents the book-loving community on TikTok, has emerged as a powerful force. “For books that start trending on the app, we could go from selling fifty to a hundred copies a week to selling eight to ten thousand copies a week,” says Shannon DeVito, director of books at Barnes & Noble, where popular #BookTok titles are displayed prominently. But while young adult genre fiction has dominated #BookTok, literary titles like Filgate’s essay collection have recently been getting a boost. Literary novels have been particularly popular: The Song of Achilles and Circe by Madeline Miller, My Year of Rest and Relaxation by Ottessa Moshfegh, Such a Fun Age by Kiley Reid, and Normal People by Sally Rooney have all trended on TikTok. Literary fare is now so beloved, in fact, that it has earned its own hashtag: #literarytok.

Beard began reviewing books on Instagram (#bookstagram) in 2019 and came to TikTok in 2021. A few of her videos went viral early on, but her impassioned pitch for What My Mother and I Don’t Talk About collected more views than all her previous clips combined—1.7 million as of this summer.

“It’s very apparent how earnest I am about loving this book,” Beard says. “That’s something I admire about #BookTok: Emotion really resonates with people and pushes them to read books.”

Indeed, on TikTok strong feelings are gold. “The joke has been that if you cry about a book, it will go viral,” says Felicity Vallence, associate director of digital and social media marketing for Penguin Young Readers.

Vallence’s team joined TikTok in late 2019 and watched the platform explode in the early months of the COVID-19 pandemic. Now TikTok is part of the team’s larger social-media strategy, which involves outreach to 1,200 influencers through a newsletter and the distribution of advance reader copies, often with personal recommendations for users of TikTok and other platforms. In some cases they pay influencers to create content, Vallence says. Beard receives free books from publishers but says she is not paid.

“Our key focus is to work with influencers who want to read the book, enjoy the book, connect with the book,” says Vallence, who adds that although she focuses on young adult books, many literary titles from Penguin Random House have hit best-seller lists thanks to TikTok, including The Midnight Library by Matt Haig and Portrait of a Thief by Grace D. Li.

For all their promise, #BookTok and #literarytok may be a mixed blessing for literary authors, who may welcome new attention to their work but feel burdened by the prospect of having to promote it on yet another social-media channel. Must writers invest hours a day making videos for a new digital platform? Vallence says no: “If it is not a passion for you, it will be evident in the content you create.”

Authors may also be able to effectively leverage TikTok by simply following active #BookTok users and responding to their posts. “When authors see my videos and engage with me in some way, that’s always meant a lot to me,” Beard says. “I make an effort to read their book.”

Still, some writers who were initially wary of TikTok have found success on the platform. Self-professed introvert Ayana Gray, for example, says she created a cover-reveal countdown for her young adult fantasy debut, Beasts of Prey, published by G. P. Putnam’s Sons Books for Young Readers in 2021, “to show [my publisher] I was a good sport.” The video, which depicts her lip-synching to a series of songs, garnered 170,000 views. That success encouraged her, and now she uses the platform not only to promote her books, but also to educate viewers about racism.

While Gray has loved connecting with readers on TikTok, she admits there are downsides. Each clip can take hours to produce. And she has been trolled in the comments. “They forget you’re a human being when you’re on the internet,” she says of some TikTok users.

Mary Rasenberger, chief executive officer of the Authors Guild, advises writers to check with their publisher before sinking time into TikTok. She also has concerns about TikTok’s potential to enable book piracy: Some videos instruct viewers in how to read for free, she says. But overall Rasenberger is optimistic about the app.

“The more young people reading today,” she says, “the more readers there will be tomorrow.”

Jonathan Vatner is the author of The Bridesmaids Union (St. Martin’s Press, 2022) and Carnegie Hill (Thomas Dunne Books, 2019). He is the managing editor of Hue, the magazine of the Fashion Institute of Technology, and teaches fiction writing at New York University and the Hudson Valley Writers Center.

The effects of social media on the creative process—although it can help writers identify and pay attention to the quotidian moments of their lives, does it siphon off their storytelling energy?

The influence of Instagram on the way we read poetry.