For two weeks in January and February, English singer-songwriters Beth Porter and Ben Please, who together form the Bookshop Band, traveled across the United States performing their book-inspired music in libraries and bookstores. With their two-year-old daughter, Molly, in tow—along with a cello, three ukuleles, a guitar, and several suitcases—the couple played gigs in New Jersey, New York, New Mexico, and Colorado. At each stop they met dozens of American authors, booksellers, and booklovers. “America is such a huge place, and when you look at it from afar without really knowing it or experiencing it, you don’t expect to find such tight-knit communities around the bookshops,” says Please. “When you are there it has a really human scale—it’s made up of the people around you, the people you meet. There was such a strong community spirit everywhere.” 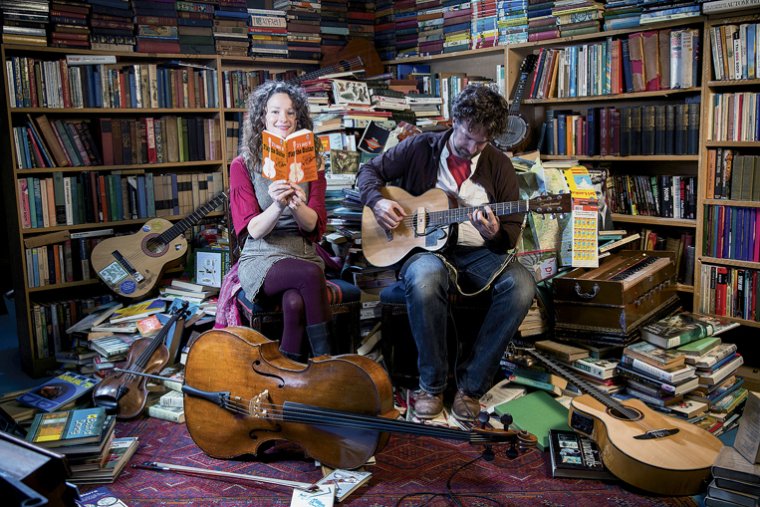 Porter and Please, who have been playing together for almost a decade, had never been on tour in the United States. But when Dwight Garner, a book critic for the New York Times, praised their music in an article about his visit last year to Wigtown—Scotland’s “book town” and current home base for Porter and Please—Nic Bottomley, who helps manage the band, seized the opportunity to drum up support for a tour. “If America’s independent booksellers can’t figure a way to get these two, plus Molly, to tour America, they’re doing something wrong,” Garner wrote. The American Booksellers Association responded by inviting the band to play in January at its annual Winter Institute conference in Albuquerque, New Mexico, and with the sponsorship of the U.K. books wholesaler Gardners and the U.S. distributor All Media Supply, the band was able to arrange the tour. “I’ve seen for myself the incredibly vibrant indie bookselling community in the United States and just how creative those bookshops are,” says Bottomley. “I knew that the band would go down a storm with those bookshops and their customers.”

The Bookshop Band composes music inspired by books and writers, from classic authors such as Shakespeare and Lewis Carroll to contemporary writers such as Yann Martel and Ben Fountain. Most of their songs start with a single book. “When you finish the book, you close the pages and let your mind wander to the first thing you remember—the most vivid moment, a feeling, a character, a phrase, or even something in your own life experience that resonated and has been resurfaced by the story,” says Please. “It could be anything and everything.” While their music could be called folk, the duo tries to avoid falling into any one musical genre. Please counts himself just as much a fan of Radiohead as he is of Pakistani vocalist Nusrat Fateh Ali Khan and Swedish metal guitarist Yngwie Malmsteen; Porter, who is classically trained on the cello, has played with folk, pop, and metal musicians over the past twenty years.

The band got its start in 2010, when Bottomley asked Please to play music for an author event at Mr B’s Emporium of Reading Delights, the bookstore he co-owns in Bath, England. Please then asked Porter and fellow musician Poppy Pitt to help compose live music for the event, which led to the trio regularly performing at the bookstore. For each author event the band members would read the writer’s book and, just a day or two before the event, compose a song inspired by the title. Please says the short composing time “encourages spontaneity, bypasses procrastination, gives you no chance to second-guess yourself as to whether the song or your approach is ‘right’ or any good. It forces you to go with your gut, let your creativity take control.” The band would then perform the song at the event with the author. “Some authors watch with bemused pleasure,” says Bottomley. “Others get quite emotional.”

Pitt eventually left the band, and Porter and Please moved from Bristol, England, to Wigtown two years ago. The band has recorded thirteen studio albums, some of which feature cameos by the authors who inspired their songs, and continue to make new music. They performed two original songs at the Fall 2017 launch event for Philip Pullman’s La Belle Sauvage, the first novel in his Book of Dust series, and are now at work on a radio single based on the series with Scottish producer Jim Sutherland. The band is also creating music for Robert Macfarlane’s recently published book, Underland: A Deep Time Journey, and working on an album with Pete Townshend, who recently announced he will publish his debut novel in November.

In the fall the band plans to release a live album, in both digital and vinyl formats, of their favorite moments from the U.S. tour. The duo might eventually return to America, because they enjoyed the tour (car troubles, sleepless nights, subway mishaps, and all) and visiting U.S. bookstores—spaces where, through their music, they felt part of a community of readers of all ages sharing a passion for books. “Bookshops seem to be a real hub,” says Please, “not just to hear the stories of authors, but also to find out about everyone’s own stories too.”

Miss the Hiss of Voices on Vinyl?
by Jonathan Vatner | News and Trends 6.18.14

Harry and Lynne Sharon Schwartz revive the Calliope Author Readings, their series of original recordings from the 1960s by novelists James Baldwin, Philip Roth, John Updike, and others in their early careers—by converting the original vinyl...