Cheryl Strayed sits on her couch, sipping a cup of hot cinnamon tea, while a gentle rain falls outside her home in southeast Portland, Oregon. Marlo, a cat she adopted from the local pound, angles up to her for some affection and Strayed halfheartedly shoos him away. Her other cat, Gulla, which was nearly dead when she found it on a highway in New Mexico while she was a resident at the Wurlitzer Foundation fifteen years ago, hides in Strayed’s bedroom. She had intended to bury the cat when she found it, but it showed signs of life when she picked it up and, following a late night visit to a veterinarian in Taos, the cat miraculously survived. Gulla has been with her ever since. 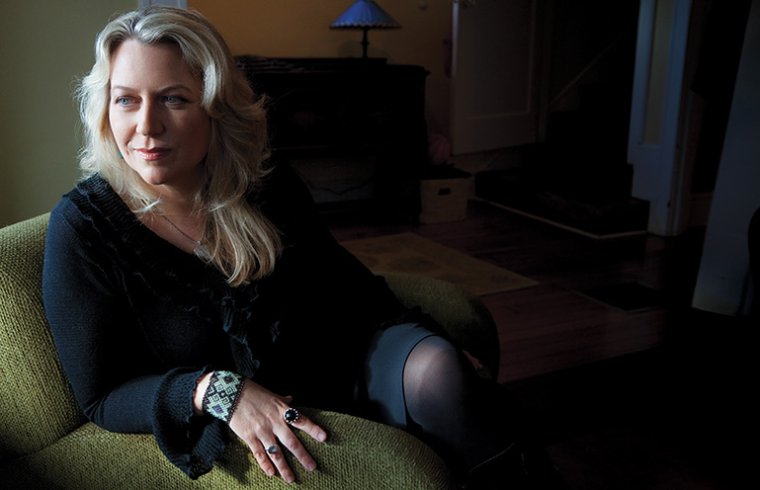 When her husband of twelve years, the documentary filmmaker Brian Lindstrom, arrives home briefly, the house brightens and fills with warmth. Strayed and Lindstrom chat quietly in the kitchen, and then he is gone again. Their two children, seven-year-old Carver (named after Raymond Carver) and six-year-old Bobbi (after Strayed’s mother), are at school.

More tea is served. Then the clouds part briefly, and the living room fills with an impossibly brilliant, golden light that seems to shine only on Strayed, making her bright eyes somehow even brighter. From all appearances this is a woman who has found her place in the world, both on the home front and in literary circles, where the buzz about her new memoir, Wild: From Lost to Found on the Pacific Crest Trail, published in March by Knopf, has steadily grown into a roar.

It is nearly impossible to believe that the woman sipping tea on the couch in the sunshine is the same woman who grieved so hard after her mother died of cancer in 1991 that she destroyed her first marriage by sleeping with other men, got tangled up with a punk rocker who introduced her to heroin, and lost all connection to her remaining
family—which, for years, when Strayed was young, had lived below the poverty line in northern Minnesota. It is equally unbelievable that this is the same woman who, at the age of twenty-six, made “the arguably unreasonable decision” to spend three months walking eleven hundred miles, from California to Oregon, on the Pacific Crest Trail (PCT). Alone. Without a gun.

“That’s what everyone asks me,” Strayed says. “They want to know if I was afraid and did I have a gun.”

The PCT is one of the world’s most grueling trails, zigzagging its way from Mexico to Canada through some of the West’s most breathtaking wilderness, from the searing Mojave Desert, through John Muir’s High Sierra, to Oregon’s startlingly blue Crater Lake, and onward to the remote Northern Cascades. Strayed admits she had no idea what she was in for, having planned for the trek as if it would be “just one long relaxing camping trip.” She began in June 1995, in the desert, not fully thinking through the idea that there would be no water for the first seventeen miles of the hike.

Seventeen years later, she credits the hike with saving her life—not only by giving her the chance to find the time and, quite literally, the space to grieve her losses, but also by giving her the mental energy to write her first novel, Torch, which was published by Houghton Mifflin in 2005. Though Strayed never actually put pen to paper on the trail, by the time she finished the hike she had composed the entire book in her head.

Torch, about a family reeling from crisis, was well received, praised by, among others, George Saunders, with whom Strayed studied in the MFA program at Syracuse University and who called the novel “a wonderful and heartening accomplishment.” But the more heartfelt and honest book Strayed was conceiving of on the trail—though she didn’t know it at the time—was the chronicle of the trip that forms the backbone of her new memoir.

Pam Houston, author most recently of the novel Contents May Have Shifted, published in February by Norton, read a prepublication copy of Wild last year and says it was probably the most profound reading experience she had all year. “Cheryl is so big hearted and so unafraid of her emotions, but she’s never victim-y,” Houston says. “There is no self-pity. And when you meet her you keep waiting for some sort of pretense, some false face, but it’s never there. She is right there just as she is in the book.”

“She’s into radical disclosure, radical honesty, and radical empathy,” adds Steve Almond, a frequent contributor to the Rumpus who came to know Strayed through her writing for that website. “I think the reason her work resonates with readers is that we are living in an age of cruelty, where people are just desperate. Cheryl, on the other hand, is brutally, recklessly, ruthlessly honest. She’s always trying to reach for the good.”