Strayed’s new memoir is really two books in one. Initially it’s a story of grief and a chronicle of the loss of her mother, her marriage, even the loss of her last name. After her divorce in 1994, she changed her name to a word that she felt was appropriate for her circumstances. “Its layered definitions spoke directly to my life,” she writes in Wild, “and also struck a poetic chord: ‘to wander from the proper path, to deviate from the direct course, to be lost, to become wild, to be without a mother or father, to be without a home, to move about aimlessly in search of something, to diverge or digress.’” 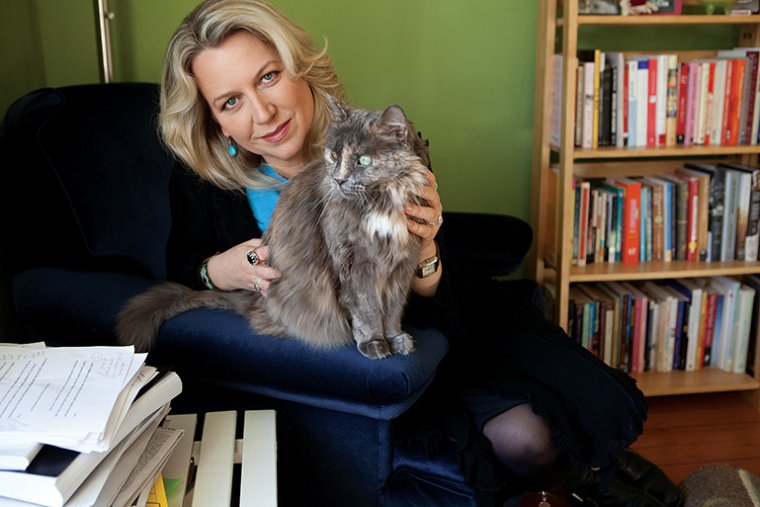 “There is a difference between a stray and a wild animal,” she says now. “And I became wild, really wild. And I use that word wild in a different way. What I was trying to say in my life then and in the book was that the wildest thing of all is to come to terms with your situation, to come to grips with it, to trust and accept and to have faith.”

And in this way Wild is much more than a book about grief and loss. It’s also a book about change and transformation. It’s an adventure story full of hope, friendship, and second chances at life. Or rather it’s a story, Strayed says, “about living with loss and letting it be.”

Near the end of the memoir’s prologue, in which Strayed describes how, halfway through the hike, one of her boots has fallen off the side of a
mountain—forcing her to make do with a pair of camp sandals—she writes:

I’d started walking in the Mojave Desert and I didn’t plan to stop until I touched the Columbia River at the Oregon-Washington border with the grandiose name the Bridge of the Gods.

I looked north in its direction—the very thought of that bridge a beacon to me. I looked south, to where I’d been, to the wild land that had schooled me and scorched me, and considered my options. There was only one, I knew.

There was always only one.

“The other choice is to stop,” she says now, as the light begins to dim and the rain outside her Portland home begins to pour. “And that means a sort of death. When my mom died, I got lost. I lost myself and, as I write in Wild, I had to find my way out of the woods. And years afterward, when I married my husband and had children, I knew that I still needed to develop myself, to be conscious always, to make amends where I’d wronged people, and to develop the craft of writing, to develop myself as a writer, an artist, and a person.”

Nine days after she finished her hike on the PCT, Strayed met Brian Lindstrom at a Tex-Mex restaurant called Esparza’s, just down the street from where they now live. “I liked him and he liked me,” she says about the chance meeting during a dinner among shared acquaintances, “but neither one of us was looking for a relationship at the time. We fell in love anyway. We got married nearly four years later, on August 7, 1999.”

The ceremony took place on the banks of the Columbia River—on the Washington side, in the town of Stevenson, which sits opposite Cascade Locks, the exact location where Strayed had finished her hike. “There’s a sort of sweet symmetry to that,” Strayed says.

The couple spent their honeymoon driving a U-Haul across the country to New York, where Strayed had decided to pursue her MFA in fiction at Syracuse University. Though she was offered the Truman Capote Fellowship at the Iowa Writers’ Workshop, she chose instead to attend Syracuse. “I talked to students at both schools and people were telling me, ‘You have to go to Iowa,’ but I just had a gut feeling,” she recalls.

“She was just a luminous presence,” says George Saunders, her mentor at Syracuse. “She distinguished herself from the very beginning. Out of the four hundred or so applications we received that year, Cheryl’s stood out to all of us because you could see in her writing she was someone capable of crediting the goodness in life. It was clear that long before she came to us she had this very happy, serene spirit. In her writing there is always hopefulness. She’s a great reviser, and the decision she always took was one that was directed toward honesty.”

At Syracuse, Strayed started committing the novel she had envisioned on the PCT to paper, but she was also working on essays, one of which, “Heroin/e,” was published in DoubleTake in 1999 and subsequently selected for Best American Essays. One of the writers who took notice of her work was Stephen Elliott, and before long he initiated contact. At the time, Steve Almond wrote the advice column known as Dear Sugar for Elliott’s website the Rumpus. When Almond could no longer keep up with the workload, Elliott asked Strayed to take over.

At first, she thought it would be a fun gig. “But then I thought, ‘Uh oh. I don’t know anything about giving advice.’”