Lent the most American of names, John Smith Jr. was a huffy eleven-year-old when he woke to the sharp report of a gunshot. Or had he dreamed it? Imagine the boy, sparked awake in the warm bedroom—his mother owns a .32 automatic—squinting at the morning sun glaring through the window of the newly finished, picture-postcard Kipling Arms Apartments. 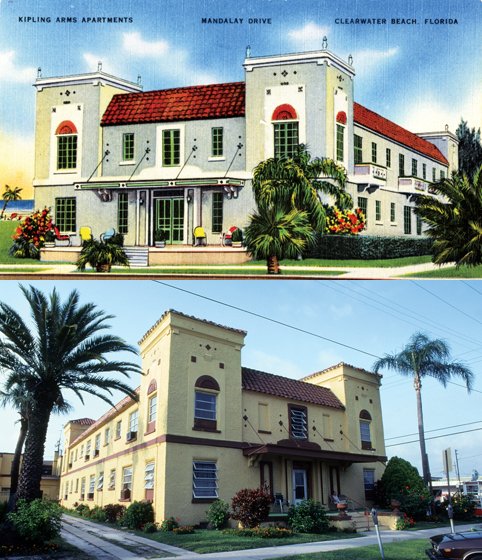 Say the fronds of the palm outside his window offer a little shade, the red blotches of hibiscus flowers inspiring an inexplicable dread. He has a younger brother, Robert, half his age, asleep in the room they share. After two years, Florida still feels hotly alien to the older Oklahoma boy. The close Gulf, just to the back of the building, is a smothering southern sea.

John Jr. hides from the day, slips back asleep, drowsing. His dreams—not meant to be understood—terrify and comfort. In the sandy alley behind the Kipling Arms, his father, spread-eagled, lies—dying or dead—on the back stoop.

The 1920s are mid-roar. The silent-film star Rudolph Valentino has just passed away. Was it pleurisy? Poisoning? He was thirty-one. His death causes global grief, a riot or two, and a few suicides. A weather map was recently televised for the first time. In September, the Great Miami Hurricane will blow through and help usher in the end of the Florida land boom. The Great Depression comes early to the Sunshine State. It’ll take twenty years, and the end of World War II, for Florida to pull itself from the funk.

John’s father, John Sr., is—or was—a banker, an out-of-state speculator with easy access to credit, who recently filed for bankruptcy. He was late to the prospecting party. What drew him to Florida and Clearwater Beach? Like most, the promise of warmer and better days. Perhaps encouraged by some advertisement or other—say, the one that ran in the June 30, 1926, edition of the Evening Independent, showing a smudgy newsprint image of the Kipling Arms under construction.

John Sr., his wife, Martha, and his mother-in-law opened a family restaurant in Tampa called the Orange Blossom. Seven months later, they sold it at a loss, and husband and wife soon filed for divorce. John Sr. has been cuckolded. Martha, a former schoolteacher, is having an affair with the owner of the Kipling Arms, also named John.

In less than three months, Martha marries the landlord and changes her sons’ last name from Smith to Berryman. This is how the poet we know as John Berryman comes to be. It’s no wonder that his masterwork, The Dream Songs, published some forty years after the death of John Sr., a death running through the most moving pages of the collection, revolves around a persona with numerous aliases, among them Henry Pussycat and Mr Bones.

Back in Clearwater Beach, Martha walks into the boys’ bedroom and announces that their father is dead. He’s shot himself in the heart, she claims, a terrible accident.

The alley behind the Kipling Arms is close and warm, the alley is collapsing, and John Jr.’s father—tall, handsome—is splayed under the weight of it all. Here’s Berryman’s verse description, from Dream Song 76:

A bullet on a concrete stoop
close by a smothering southern sea
spreadeagled on an island, by my knee.

For a time, Martha Smith is a suspect. The article in the June 28 edition of the Evening Independent will, with the help of a coroner’s jury, largely clear Martha of wrongdoing, but the article also offers clues that don’t add up:

She found on her dresser a note, unsigned, but presumably from her husband, which stated that he was unable to sleep for three nights and had suffered from terrible headaches.

After discovering this note, Mrs. Smith started to search for her husband and found his lifeless body stretched on the ground at the rear of their apartment. Bloodstains were found upon his shirt, but there were no traces of powder burns on the body. An automatic pistol, 32 calibre [sic], was lying near the dead man.

Occupants of the apartment house and several people living in adjoining cottages testified that they had heard no shots.

Suits for divorce had been filed by both Mr. and Mrs. Smith in Hillsborough county, both of them charging infidelity.

“No...powder burns on the body” hints that the gun wasn’t fired from point-blank range, and so the gunshot wasn’t necessarily self-inflicted. No witnesses hearing the sound of the shot—in early morning, in an alley where the report would echo and amplify—suggests that the shot may have been fired elsewhere, that maybe the body of John Smith Sr. was moved. But this is speculation over a long-gone crime scene.

The Kipling Arms stood for sixty-odd years at the corner of Mandalay Avenue and Kendall Street. A photograph from 1982 shows it much the same as it appeared on a postcard from the 1940s. A few small details have changed—the palm trees have grown; the stucco building looks run-down.

The Kipling Arms is now no more, razed to make way for a Hess station and convenience store.

If your sensibility runs, like Berryman’s, more strongly toward the macabre, to mark the recent centenary of Berryman’s birth, you can stand in the approximate place where John Smith Sr. was found dead on the back stoop. That’s the place, Berryman seems to suggest at the end of Dream Song 145, where Henry was born.

I—I’m
trying to forgive
whose frantic passage, when he could not live
an instant longer, in the summer dawn
left Henry to live on.

That spot behind the Hess station is, at present, the in-ground pool of the Palm Pavilion Inn. The gulls laugh and dicker down on the beach. Traffic whooshes hotly by on Mandalay. Pause there for a time, and the paying guests of the Palm Pavilion may shoot you queer looks—looks that invite the question, Why’s that person just standing there, fully clothed, at the edge of the pool, looking down?

The centenary of John Berryman’s birth occasioned conferences, in Dublin and Minneapolis, and several publications in 2014. Farrar, Straus and Giroux, Berryman’s longtime publisher, reprinted a clutch of books: Berryman’s Sonnets, 77 Dream Songs, and the complete Dream Songs, each with a new introduction. But FSG led with The Heart Is Strange: New Selected Poems, edited and introduced by Daniel Swift. What makes The Heart Is Strange a “new” selection is, I suppose, the two poems in it that are collected in book form for the first time: “The Cage,” written in 1950, after Berryman’s visits with an institutionalized Ezra Pound; and “Mr. Pou & the Alphabet,” written at Christmas 1961, for Berryman’s son, Paul, after Berryman and Paul’s mother separated (they were married four years). Both poems are more interesting for their insight into Berryman’s life than they are significant additions to his body of work.

For a poet like Berryman, who was so intensely intimate in his confessions—at times obfuscating, at other times fictionalizing for poetic effect—a good biography is essential to understanding him and, especially, the difficult Dream Songs. The best of the small batch is Paul Mariani’s Dream Song: The Life of John Berryman (William Morrow, 1990). Mariani, a poet himself, does not take a critical look at Berryman’s poems; his biography is a deeply personal study of Berryman the man.

Mariani unearths biographical facts that allow for bottomless insights into the poems. Want to know where the persona of Henry, at least in name, originated? Mariani points us to Berryman’s second wife, mother of Paul: “With the sharp-edged banter that characterized Berryman’s relationship with Ann Levine, she and Berryman had taken to calling each other by the worst names they could imagine. Thus Ann became Mabel; Berryman, Henry.” Ann Berryman (née Levine) coined what is arguably the defining persona of American postwar poetry.

In The Dream Songs, a long cycle of poems inspired by Walt Whitman’s “Song of Myself,” John Berryman returns over and again to the scene of his father’s death. In the poems, the death has been simplified: plain suicide. There is no hint whatever that Berryman’s mother was implicated. The only murderer is Berryman’s father.

In Dream Song 145, Berryman compares his father to another Whitman—Charles, not Walt. And what a quintessential dichotomy of white American masculinity: Walt a poet and Civil War nurse, Charles an engineering student and onetime U.S. Marine; the former became the voice of America, the latter became a mass murderer. In 1966, Charles, a deadeye shot, killed fourteen people and wounded thirty-two more from the observation deck of the tower on the campus of the University of Texas in Austin, and Charles is the man Berryman holds up as offering insight into his father:

Also I love him: me he’s done no wrong
for going on forty years—forgiveness time—
I touch now his despair,
he felt as bad as Whitman on his tower

What a simple statement—“he felt as bad as Whitman”—made devastating by its double meaning. Berryman’s father felt bad: He felt terrible doing what he was doing, killing, and Berryman’s father felt evil. Charles, it’s worth noting, first took care to kill his mother and wife before climbing his tower, a site that, after the massacre, became a popular destination for suicides.

Earlier in the poems, in Dream Song 143, Berryman expresses his fear of his father:

He was going to swim out, with me, forevers,
and a swimmer strong he was in the phosphorescent     Gulf,
but he decided on lead.

This fear later becomes something akin to gratitude for his father’s suicide. His father only murdered himself; he didn’t do like Charles and kill his loved ones first:

a powerful swimmer, to     take one of us along
as company in the defeat sublime

What a phrase, inverted—the defeat sublime—what a stand-in for death, and is it Berryman’s own? The phrase, that is, not the death. Maybe. Or maybe it’s copped from Lady Leonora Speyer, winner of the 1927 Pulitzer for poetry, from her war-postmortem poem, “To the Victors and the Vanquished,” first published in the Nation a month after the armistice that brought World War I to an end in western Europe:

There is a victory in dark defeat—
Sublime—complete—
The triumph over self and fear and death!

Berryman might agree about the triumph, but would any of his three wives, would his son, Paul?